‘I wasn’t thinking I’d be a Bible translator. I’m an extrovert!’

“I studied linguistics as part of my undergraduate degree. It wasn’t part of my original plan. I was doing Spanish and then a friend said I’d be good at linguistics, so I enrolled. I remember the first day the lecturer gave us various sentences in different languages and we had to figure them out. It was like a puzzle. I actually enjoyed it. That was a surprise! I wasn’t sure what I wanted to do after university, but I knew I wanted to help people somehow.

Then in 1999, I went to ReachOut – a missions convention in Katoomba, NSW. I visited all the mission stalls and I spoke to representatives from every mission agency and I took all their brochures – all of them, that is, except for Wycliffe Bible translators. For some reason, I thought that Bible translating would be boring, sitting at a desk all day long. I’m an extrovert. I need people!

Will and I married in 2000. He was also studying linguistics and he was interested in using it overseas. Soon after he proposed he said, “Will you come to India with me?” I agreed that I would come once, but I wasn’t promising more than that. I didn’t know anything about India. Also, a month after our engagement, I got glandular fever, which turned into chronic fatigue, which lasted for five years. At one point, I was having four naps a day. But somehow, in late 2001, on our first wedding anniversary, we found ourselves in a rickshaw, in the back blocks of Hyderabad, South India, lost.

It became more than just one visit to India. For the last 21 years, we’ve lived half our life in India. It started with research into linguistics and surveys of languages. Then, we joined Wycliffe. For some reason, weirdly, I still wasn’t thinking I would be a Bible translator. Then, in 2008, we were living in rural India with an eight-month-old baby, and Will was working with a local translation team. He started bringing the translation team over to our house to do Bible studies. One day, we were reading Mark. In chapter 6, it says that Jesus sent out his disciples, saying, “Take nothing for your journey except a staff.” (v8)

One of the translators asked me, “How old were the disciples?”

I replied, “Why are you asking?”

I realised that, in translation, connotations are so important, not just dictionary definitions! We translated ‘stick’ as ‘stick for walking’. I also realised that this was one way I could help people. I wanted to be a Bible translator! In Revelation 7:9, the vision is amazing. There will be a day when vast crowds will gather from every tribe, people and language, praising God, standing before the throne and before the Lamb. It will be beautiful, but it isn’t going to happen magically. We have to work together to make this vision happen.

Since 2008, I’ve been involved in Bible translation as a consultant and trainer. It’s not boring at all. It’s interesting! And it helps to be extroverted … because it’s all about people! You have to talk to lots of people to gain understanding. And I love seeing them come to a deeper understanding of the Bible. When they read it in their mother tongue, in words they understand, they often start cheering or clapping. They read about Jesus and they say, “Oh, wonderful!”

It reminds me that knowing Jesus is still the most important thing, for all of us. I can read the Bible all day long, but what is my relationship with Jesus? How am I living the words I’m translating? I especially love seeing women in India read the Gospels. As they get to know Jesus, it transforms their day-to-day and gives them hope for the future. It’s the same for all of us.” 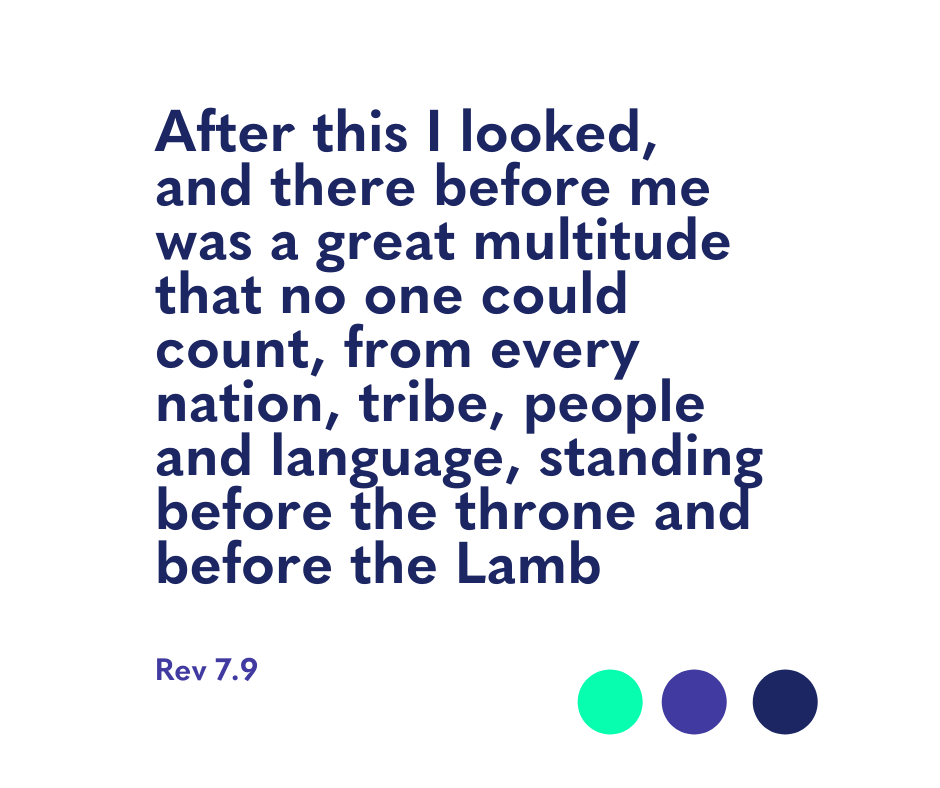