Private Nathan Whittington, takes part in sprint training at the Sydney Academy of Sports and Recreation, Narrabeen, at the final staging camp before the Invictus Games which start on October 20 in Sydney.
© Commonwealth of Australia 2017 - Department of Defence
Good News chaplaincy

As the much-anticipated Invictus Games kick off in Sydney this weekend, all attention will be – quite rightly – on the 500 competitors. But in the background, largely invisible to the thousands of spectators, a small, faithful team will be working to make a difference in the lives of competitors and of many others.

A team of chaplains will be on hand to provide practical, emotional and spiritual support wherever it is needed. The team consists of seven chaplains, including four sports chaplains and three from the Australian Defence Force (ADF).

Overseeing the team is Hannah Johnson from Sports Chaplaincy Australia (SCA), who explains their purpose to Eternity: “We’re just there to provide pastoral care to those involved in the event, and so the outcome we are hoping for is really that people would be feeling cared for. [At SCA] we often say that we’re able to share the grace and mercy of Jesus to people where they are at. That’s what we hope to be able to do.”

Throughout the eight days of competition, the chaplains will be at Invictus Games House at Olympic Park in Homebush (where competitors will be based between events) from 7am to 10pm, and will also provide an after-hours phone service. They will have an area to meet with people in private, and will also be walking around the site to connect with people.

The nature of the Games, being designed for “wounded warriors” – defence force personnel with emotional and physical injuries – will bring some unique pastoral care needs.

“A lot of these guys have been through some pretty traumatic situations, so there’s opportunity for us to be able to have a chat and a listen, and bring support to people as they’re processing some of this stuff,” says Johnson.

“Some of these competitors have had these injuries for many years. For some of them, it’s [occurred] in more recent times. Different people are at different stages of those journeys. So we want to come alongside and support them.”

The chaplains will also have opportunities to minister to about 1200 family members and friends of the competitors.

“It can be a great time for friends and family to be able to have someone to chat to as well,” says Johnson.

The team will also serve the Games’ 140 staff and 1000 volunteers, as well as other ADF personnel present. The chaplains will be easily recognisable to those in the defence force because they will all wear a purple armband – a universal colour worn by military chaplains.

“We are there to support people wherever they are at.” – Hannah Johnson

She notes that, with competitors representing 18 nations, chaplains are required to offer multi-faith support at the Games. So, in preparation, the chaplaincy team gathered information from local faith-based communities that they can refer people to if needed. They will also coordinate access for leaders from other faiths to visit competitors on request. And they have copies of the Bible in different languages on hand.

“We are there to support people wherever they are at, and if they wish to talk about spiritual things, they can. If they are of another faith, we are able to refer them to those faith leaders where required.”

The team also has the opportunity to lead a non-denominational Christian service on Sunday morning, 21 October. 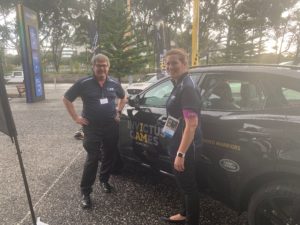 Colin Watts and Hannah Johnson from Sports Chaplaincy Australia get set for the Games.

According to Johnson, “This is an opportunity for any of the competitors, volunteers, officials to come and connect and spend time in worship together and to hear a message preached … People of all faiths and no faith are welcome to come.”

The Invictus Games were founded in 2014, so these are the fourth Games but the first hosted in Australia. It’s already been an exciting week for our nation as the founder of the Games, the Duke of Sussex, and his Duchess (aka Harry and Meghan) have visited the sites of Sydney, Dubbo and Melbourne. This year’s Games are also special as they coincide with the Centenary of the end of World War 1, providing the opportunity to remember the sacrifices of past and current defence force personnel as an international community.

“There will be many ‘grace moments’ provided by our chaplains.” – Hannah Johnson

It’s significant that the aim of the Invictus Games – to promote healing and rehabilitation rather than competition – will be furthered by the chaplaincy services provided.

“Throughout these games there will be many ‘grace moments’ provided by our chaplains. That can be in the everyday: just chatting to people, dropping a [competitor’s] family member to their hotel or home, sending a text member to a staff member or a competitor who has had a tough day. But also in responding to specific situations that may arise for competitors or their friends or families,” says Johnson.

“I hope that people feel that support – that they have a safe place where they are able to come and talk with somebody, with no judgment, no matter what faith background, or how their performance has gone at the Games.

“That’s the outcome we’re hoping for – that people feel valued and supported.”