At 50, Peter was “drowning in debt”. He owed $70,000 on five credit cards and had spent years enslaved to hefty interest payments.

His marriage had broken down and he was struggling to pay child support for his two sons, now living with their mum. He feared the letterbox with its constant stream of bills.

“I wanted to end [my] life because nothing was left. It was pretty awful.” – Peter

The final blow fell when the builder of an investment property Peter owned went bankrupt. After that, “everything fell apart”.

“It’s not just the worry of paying [the debt] down … It’s anxiety, crying. I wanted to end [my] life because nothing was left. It was pretty awful.”

But Peter’s life turned around when his sister, a member of Ipswich’s Catalyst Church – in the suburb of Brassall, Queensland – encouraged him to make an appointment at the church’s debt centre. Catalyst is one of 40 churches across Australia partnering with Christians Against Poverty (CAP) to run debt centres, including a mix of ACC, Baptist, C3, Church of Christ, Acts 29 and Anglican churches. Another 182 churches run CAP money courses  – a three-session workshop on budgeting – throughout the year.

An enterprise that started in the UK more than 20 years ago, CAP opened its first Australian debt centre in 2000 and has since migrated to New Zealand and Canada. As a registered charity, CAP relies on donations from churches and individuals in order to provide free debt help to clients.

Peter is now proudly among more than 3000 Aussies who have become debt free through the help of CAP.

Angela Coto, who runs Brassall Debt Centre as a CAP Debt Coach, has vivid memory of her first meeting with Peter three years ago: “At that first appointment I said to him the biggest issue he had was his credit cards … You could see that was almost an addiction.”

“So we just put it to him, ‘Would you be prepared to cut up those cards?’ And it was quite an emotional moment … He started sobbing.

“I just didn’t expect that reaction.

“So he cut them up and as he was cutting them up, he was crying.”

After this initial appointment, a tailored budget was prepared for Peter by CAP’s accredited financial advisers. On her second and final visit with him, Angela returned to talk through its implementation. Peter was then assigned a CAP case worker who, via phone and email, worked with him to change his spending and lifestyle habits – for as long as it took to become debt free. For most people, this is around two to three years.

“We’ve got such difficult situations and clients, but then I see the end result of people being set free, hope being brought into their lives and lives changed. It’s worth every second.” – Angela Coto

As difficult as Peter’s journey has been, his story is not unique. Angela has seen a significant increase in the number of clients at the debt centre since it opened six years ago. The centre sees, on average, four to six clients per month, equating to around 40 each year. Most are middle-aged or elderly. Clients are referred by Centrelink, social workers, doctors, psychologists, other churches and, increasingly, word of mouth.

While, theoretically, Angela only works at the centre one day a week (she also serves as Executive Pastor at Catalyst Church), she admits “it sort of seeps into all my days.”

“It’s incredibly challenging. You know, some weeks I’m pulling my hair out.”

The load has further increased with the nearest debt centre – in a town 15 minutes away – closing down last month. “It had to close just because the church didn’t have enough funds to continue the service. It wasn’t that [the service] wasn’t effective,” Angela explains. “Now I’m getting all their clients, and so I’m booked right up until September … I’m trying to do two days a week just to catch up, because otherwise those people are waiting months and that’s not good.” 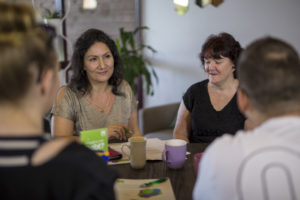 It’s this need that compels Angela and other CAP coaches to keep on going. “We’ve got such difficult situations and clients, but then I see the end result of people being set free, hope being brought into their lives and lives changed, and it’s worth every second,” she says.

Significantly, Angela notes that most clients have fallen into debt because of a change in their circumstances, rather than irresponsibility or deliberate mismanagement of their money.

“I’d say for 85 per cent of my clients, it’s because something’s changed – they’ve either lost their job or they’ve gotten ill and they haven’t been able to continue working. So their incomes decrease but their debts are still there.”

“People are ashamed that they’re in this position, even though it’s out of their hands.” – Angela Coto

The results for most are anxiety, depression and shame. “People are ashamed that they’re in this position, even though it’s out of their hands. They’re so embarrassed that they don’t have the means to continue to – especially for the men – support their family and take care of them. So they get anxious and they can’t see how they can possibly get out of it.”

Angela continues, passionately, “In the first appointment usually everybody’s sort of quite tense; their arms are crossed and there’s a heaviness. But as we go through … they can see that there’s actually some hope. You can just see their whole countenance change; their arms come to their sides, they lean in a bit more, they’re actually smiling. I just love that!”

But unfortunately, not everyone can be released from debt – at least in the immediate future. This is particularly true for those without an income.

“Some of the saddest cases – I’ve got one at the moment – we’ve had to put it on hold because [the couple are] both looking for work. If they don’t have income, we can put a budget together but, realistically, we can’t do anything. There’s nothing to put toward all their expenses,” says Angela.

This is often the case for elderly people who are unable to increase their income. Even in these cases, though, there is still hope.

“The beautiful thing is CAP’s financial advisers take every opportunity to talk to banks when they have an opportunity,” Angela explains.

“One of my clients had a wife who had dementia and she was incredibly ill. He became her carer. He lost everything and his debt was around $160,000. So CAP asked [his bank]: ‘Would you waive this debt? This man cannot possibly pay it back.’ And they did.”

He joined other CAP clients at an annual end-of-year dinner run by the Brassall Debt Centre and “with tears in his eyes, just said thank you for doing that,” Angela recounts.

“It was like a jigsaw puzzle – things fell into place at the right time and I believe God was working.” – Peter

Along with the release from earthly debt, CAP clients are also given the opportunity for eternal freedom. The service is unashamedly Christian and Angela says she prays for and with every client. Some of them have reconnected with God and others have even become part of the Catalyst Church community.

“I have a couple that weren’t coming to church but had a faith when they were younger. We went through the journey and they’re now debt free … They’ve been coming to church for two years now, so that’s another way that I can get to see them and touch base with them.”

For Peter, the prayers of CAP workers and seeing God at work in reconstructing his life, led him to recommit his life to God.

“It was like a jigsaw puzzle – things fell into place at the right time and I believe God was working,” he shares.

Peter also put in a lot of hard work himself, paying down $50,000 of his debt through “big decisions, big cutbacks” and careful budgeting. Then in what he describes as “the grand finale”, last year at the debt centre’s dinner, a local business owner handed Peter a cheque to “free me from the last bit of debt I had.”

Now 55 and debt free, Peter says, “My heart is so overwhelmed. I just never thought this would be achievable!”

As well as to God, he gives honour to Angela and the CAP team. “The program is so good and the people are so lovely … As good and as bad as things got, they always made the time [for me] … I had plenty of times where I cried and would stick my head between my legs thinking what do I do? But if I was at wit’s end, I would ring up my case worker and tell them how I was feeling and they would calm me down and give me an assurance that I was going to be OK … I was given so much power and ammunition to keep going.”

Now he’s teaching his sons some valuable lessons about budgeting and that “if you want something, you’ve got to have money, not put it on a plastic card.”

More information about Christians Against Poverty

But you can help

Meet the jewels inside the Treasure Chest