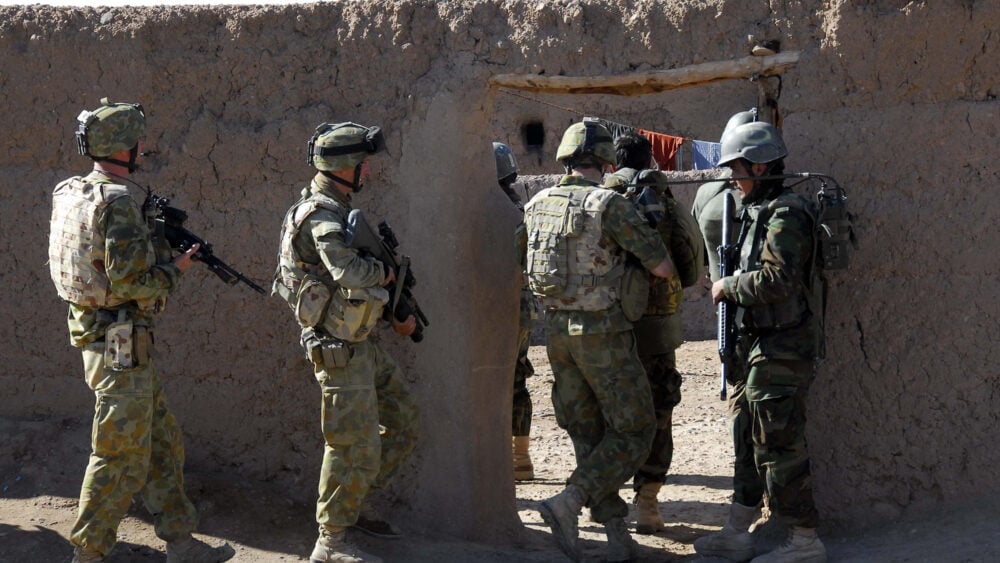 …my wife was out with family, my boys were in bed and I had the booze and the pills ready to go.

“Over time my [post-traumatic stress disorder] worsened until one night I attempted suicide,” says Corporal Andrew Summers, an avionics technician in the Royal Australian Air Force.

“Tina, my wife, was out with family, my boys were in bed and I had the booze and the pills ready to go. I looked up and saw my wedding photo and photos of my two little boys and I made a bargain with God. I told God, ‘If you are real like my wife says you are, you need to stop me. If you do, I promise you I will serve you for the rest of my life. I give you 24 hours.”

That’s exactly what happened: the next day Tina went to church and happened to meet Captain Alexander Thorton, a psychologist in the Army, who was just passing through their town en route somewhere else. Thorton connected Andrew with Jo, a psychologist at Singleton Army Barracks, whom he started seeing for counselling. Andrew had been suffering from post-traumatic stress disorder (PTSD) for nearly 8 years, after his first tour of duty in Iraq and Afghanistan.

Reflecting on that coincidence Andrew says, “He [Thorton] was in the exact place that God wanted him to be in order to intervene in my life and save it.”

Andrew started receiving counselling with Jo, and says,  “she gave me the tools that I needed to function in society. She helped me talk through my feelings and I never felt like she judged me or thought less of me. Jo helped me to communicate with Tina how I was feeling.” Andrew says that although he had given his life to Jesus years earlier, he had walked away from God and wasn’t a regular churchgoer. He and Tina started going to a church in Medowie, a few hours north of Sydney. “It was extremely difficult for me to walk into the church, my anxiety levels were high and it took courage to even walk through the doors. However, once I walked into the church I felt safe, as if I were covered with a warm blanket.”

Some of the most significant steps in Andrew’s healing process occurred at the church in Medowie, particularly amongst a group of men who met together weekly to worship God and pray for each other.

“Each part of my healing process involved visits to Jo (my psychologist) and the healing work of God, often through these godly men. During this time I found a lot of comfort in certain Bible passages, in particular “but those who hope in the Lord will renew their strength. They will soar on wings like eagles; they will run and not grow weary, they will walk and not be faint” (Isaiah 40:31). Psalm 91 was also a source of great comfort,” says Andrew.

Over time Andrew’s condition improved, but the PTSD was triggered again after the Sydney siege (where a man held 18 people hostage in the Lindt café). Once again Andrew suffered massive panic attacks which meant he was unable to accomplish even basic tasks like grocery shopping and driving.

“I encourage anyone who is suffering from PTSD to get professional help, but also to call out for help from Jesus, who rescued me from suicide and ultimately healed me of PTSD. He loved me as broken as I was.”

During this time of heightened anxiety and hyper vigilance he sensed that God was prompting him to go to a mosque and confront the people he both hated and feared. He told Tina, and she set up a meeting with the Imam of the largest mosque in Sydney.

“At the mosque I asked the Imam to forgive me for my hatred of his people,” says Andrew. “The Imam replied, ‘I hugged you when you came in, didn’t I?’”

Andrew says that while they sat around a table talking with the Imam his anxiety completely left him.

“It was truly a miracle. I was healed of PTSD. To this day, I haven’t had a single symptom of PTSD,” says Andrew.

Andrew hopes that his story will help break the stigma of mental health issues and encourage people to get help. “I encourage anyone who is suffering from PTSD to get professional help, but also to call out for help from Jesus, who rescued me from suicide and ultimately healed me of PTSD. He loved me as broken as I was. He took me, saved me and made me new thanks to his love and goodness. I know that if he can do it for me, he can do it for others.”

His prayer is that all who suffer from PTSD will accept Jesus’ invitation: “Come to Me, all you who are weary and burdened, and I will give you rest. Take my yoke upon you and learn from Me, for I am gentle and humble in heart, and you will find rest for your souls. For My yoke is easy and My burden is light” (Matt 11:28).

In his journey with PTSD Andrew was assisted by the Military Christian Fellowship, an organisation that promotes Christian faith in the Australian Defence Forces.

Andrew’s PTSD started affecting him after his first tour of duty in Iraq and Afghanistan, and he suffered through it for eight years. If you or someone you know needs help please call Beyond Blue on 1300224636.