Christmas came early – and handmade – for these kids

Christmas came early for a group of kids at a unique childcare centre in southwest Sydney. But it wasn’t Santa who made this special delivery, and the gifts the kids received were not the kind you find on department store shelves.

On November 26, about 50 Aboriginal and Torres Strait Islander kids received tailor-made “Play & Learn Packs”, which included a special doll and a storybook telling the story of the child meeting their new their doll. Also included was an activity kit that expands on the story by introducing children to the friendship they can have with Jesus.

The special dolls were handmade by Year 9 textiles students at Broughton Anglican College in Campbelltown, while the storybooks – Imagine You had a Friend – were created by a community-centred charity called Project KIN. They teamed up with Michael Duckett, Macarthur Indigenous Pastor, to organise the special gifting day for kids at Oorunga Wandarrah MACS centre, which provides affordable daycare to Aboriginal and Torres Strait Islander families in the Campbelltown district.

“Project KIN is all about helping kids to play and learn.” Maryann Webb

“Project KIN is all about helping kids to play and learn,” explains Maryann Webb, Founder and Managing Director of Project KIN.

“We want to come alongside families who are facing disadvantage and help break that cycle in a practical way. We really believe that where there’s high-quality resources in the home, we can empower families and equip them with opportunities to read and to play, and help to promote healthy bonds in the home.”

The idea to distribute packs at Oorunga Wandarrah originated from Michael Duckett, after seeing Project KIN’s work at a previous gifting day. Duckett notes that some of the kids at the preschool face economic disadvantage but more significantly, he says, is the ongoing issue of racism.

“From the day they’re born, they’re always battling uphill,” he explains, giving the example of Aboriginal and Torres Strait Islander kids being followed by security guards in shops when they are just trying to make an honest purchase.

In serving at Macarthur Indigenous Church for the past 11 years, Duckett has used opportunities such as this gifting day to share the gospel message with even the youngest members of his local community.

“I would love the kids to go home … [encouraged] about how special they are to God.” – Michael Duckett

“I suggested this preschool so these little kids could receive a blessing of the love of God,” Duckett tells Eternity.

“I would love the kids to go home with a smile on their face, and for the materials inside [the pack] to encourage them about how special they are to God – that’s invaluable.”

Before the kids received their gifts, Pastor Duckett gave a short message about the “real meaning of Christmas.”

“I’m hoping that they will be reminded that Christmas is not about Santa Claus … but the real meaning is a celebration for Jesus’ birth – the gift from God. And that’s what I hope they might even put in their memory banks.”

The efforts of the Broughton Anglican College community were richly rewarded on the gifting day, when some of the students, teachers and chaplains saw the delight with which the kids opened their packs, and then spent time playing and reading with them.

Throughout the year, Year 9 textiles students sewed a total of 33 dolls, each with unique features and tiny details, such as crocheted crowns and knitted socks, as well as doll-sized blankets.

The project became a whole school effort, with parents and grandparents helping to knit and the junior school raising $1900 to cover the cost of the packs.

“We are really excited that Broughton is going to continue partnering with us in 2019,” says Webb. “Seeing the impact they have had in the local community is quite amazing.”

She is hoping that more schools will join the program in the future, and that more organisations and individuals will partner with and provide funding for Project KIN as it grows. Some of the organisations already on board include the Salvation Army, Anglicare, Wesley Mission, Jericho Road and Tharawal Aboriginal Corporation (which runs Oorunga Wandarrah). Significantly, the number of volunteers across Australia who assist in making dolls and provide other support has swelled to about 300.

“One pack at a time, we’re trying to reach these families with the gospel.” – Maryann Webb

Project KIN is the realisation of an idea that came to Webb three years ago, when she was sitting in the bedroom of her daughters, trying to help them to go to sleep. 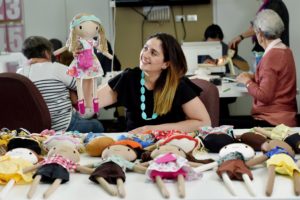 “I was praying and looking around their room, and I thought, ‘what is bedtime like for children who have very little?’” she recalls.

A trained primary school teacher and a keen sewer, Webb came up with the idea of making dolls for kids in need, such as those from a low socioeconomic background and experiencing disadvantage, trauma and vulnerability.

“I felt a real sense of God’s presence confirming that idea – to make dolls for kids in need and they would come to know their identity and value in him, and go on to do amazing things for him,” she says.

As 2018 draws to a close, Project KIN will celebrate a significant milestone: 500 packs gifted.

“We know there’s 731,000 kids who are living in poverty in Australia, and that blows us away. So, one pack at a time, we’re trying to reach these families with the gospel and with practical packs of love,” says Webb.

“Our Play & Learn packs won’t solve the world’s problems, but we believe they can be a powerful and tangible piece of the ‘change’ puzzle.”

If you would like to know more about Project KIN visit www.projectkin.org.
There are six key ways you can get involved:
1) Volunteer to create
2) Fund a pack (as a family or individual) - $48 a pack
3) Fund a community (as a business)
4) Become a Local Gifting Partner
5) Become a Schools Partner
6) Become a Project KIN Ambassador in your local community