Lysa TerKeurst had a series of disappointments that left her shattered. Her new book explores how she relied on God to help her overcome.

When Lysa TerKeurst was writing her book It’s Not Supposed To Be This Way, about the disappointments in life that leave you shattered, she certainly couldn’t have predicted how her life would change only months after it was published.

TerKeurst is an American bestselling author and president of Proverbs 31 Ministries, a popular non-denominational Christian resources for women all over the world. But she’s had a tumultuous few years in her personal life.

It was almost three years ago that TerKeurst, a mother of five, found out her husband was having an affair and struggling with substance abuse. Not long afterwards, she had emergency surgery for a life-threatening twisted colon. Over a year later, in June 2017 after many hours of counselling together, TerKeurst announced to over a million social media followers that she had decided to seek a divorce from her husband, after learning he was continuing the affair and still had substance abuse issues that he was not addressing. Two months after the announcement, she was diagnosed with breast cancer. 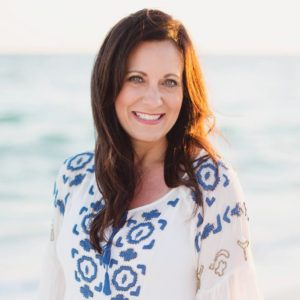 “Things crashed,” TerKeurst writes in her book. “Things broke beyond repair. Things went from being whole to being reduced to dust. I crawled into bed. I willed the world to stop spinning. I wanted everything to pause and stop hurting me. But nothing did.”

All these experiences are the backdrop for TerKeurst’s new book, published late last year.

“It was very difficult to let some parts of my story by the backdrop to the message of this book. But I’m committed to making sure that other people don’t feel alone, and honestly if I think I’m helping others, it helps my healing, too.”

In It’s Not Supposed To Be This Way, TerKeurst writes from a place of intense disappointment at the way her life has turned out, and how God has given her the strength to make it through. She says that disappointment happens “anytime we have an expectation of what our life should look like and then our experience falls way below those expectations.”

“The distance between our expectation and our experience is the fertile ground for disappointment. It’s that realisation that we thought things would be different to what they are.”

She says feelings of anger and fear about those situations happen too. But it all boils down to disappointment.

“Disappointment doesn’t mean the end of the story. Maybe, it’s actually an appointment with God in disguise.”

TerKeurst argues it’s important to bring the topic of disappointment in life “front and centre”, to build a vocabulary that helps people express these feelings and explore how God can speak into them. “A million prayers. A miracle answer. A marriage restored,” TerKeurst wrote on social media on the day she renewed her wedding vows with her husband, Art. Lysa TerKeurst, Facebook

“Disappointment doesn’t mean the end of the story. Maybe, it’s actually an appointment with God in disguise.”

For TerKeurst, disappointment was definitely not the end of her story. In November 2017, she announced she was cancer free after a double mastectomy. And then in December last year, TerKeurst renewed her vows with her estranged husband, Art.

“A million prayers. A miracle answer. A marriage restored,” she wrote on social media.

The reconciliation did not happen easily, says TerKeurst. She told Eternity that she had to work through a lot of trust issues, both with her husband, and with God.

“My counsellors taught me that trust is built with time plus believable behaviour. So, I had to give myself time and verify whether [Art’s] behaviour was believable or not.

“But here’s the difference between learning to trust God and learning to trust people: with people, sometimes that believable behaviour isn’t there. With God, he’s always trustworthy. What he allows to be filtered through his hands may make us feel like his timing seems questionable, or his promises doubtful, or his lack of intervention hurtful – but that’s where we have to go back to who we know God is. God cannot lie. He cannot deceive. And once I set my brain on that, I can learn to process my pain through the filter of God’s trustworthiness.”

TerKeurst says that even in the blessing that is being reunited with a husband who has recommitted to being faithful to her and has “done the work” of coming out of substance abuse, she has had to learn that “God loves us too much to answer our prayer at any other time than the right time and in any other way than the right way.”

In the epilogue to her book, written before her renewal vows to her husband, but after their decision to make a new effort to reconcile, TerKeurst writes that she is scared of the future. While wrapping up a book about disappointment with news that she is reconciling with her husband might seem like the perfect ending, TerKeurst knows that life is not that tidy.

She says she has deep compassion for those in marriages who have not worked out. Or those with illnesses that have not been healed.

“I’d be there too,” she writes, “but for an unexplainable grace, a wind of change, and a man with a repentant heart letting God work in him like never before.”

“I’m as surprised as anyone.”

What to do when you don't get what you want