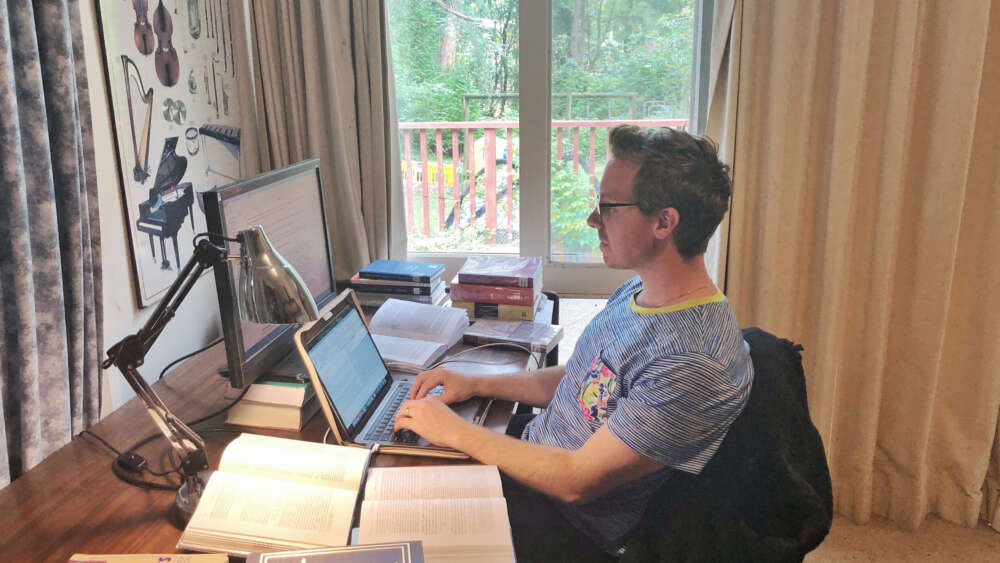 In a world free of a quick-moving respiratory virus, new missionaries Rob and El Falls would be saying goodbye to family and friends at Sydney Airport, as the couple and their three children begin a new life in Vanuatu, working in a regional Bible college.

El would spend her days as a nurse providing primary healthcare to rural and isolated villages while also homeschooling Zachariah, five, Jason, three, and Asher, 10 months. And Rob would teach theology to young seminarians from around the Pacific.

But that’s not the world today. On the day they should have been leaving Sydney as missionaries with Australian Presbyterian World Mission (APWM), El goes to work at Hornsby Hospital. Rob drops off their eldest at school before heading home to work remotely for the college in Vanuatu, which will – eventually – become their future home. Rob and El, along with Zach, Jason and Asher, were meant to head to Vanuatu in February 2021

The family’s original plan was to leave Sydney for Vanuatu in late February, following a year of cultural and linguistic training, and sponsorship development. But border closures have meant their timeline has been continually pushed back.

“The last 12 months have been full of significant instability for us as a family,” Rob says. “There have been moments we really struggled with it, and moments of frustration and anxiety.”

Not being able to get to Vanuatu has not stopped the couple supporting the ministry of the Bible college, located on Santo Island’s Luganville, Vanuatu’s second-largest city.

From his home in Turramurra in Sydney’s north, Rob works two days per week for the college in Vanuatu (thanks to APWM funding). The college is in the process of redeveloping its theology and mission curriculum to meet international standards, so Rob is working with the curriculum developer in updating its programs.

Internet coverage in Luganville isn’t reliable enough for Zoom calls, but Rob is able to communicate via email and WhatsApp calls. “Welcome to modern-day Vanuatu where everyone, even in the most remote villages, has a smartphone.” (Most phones are charged via solar power.)

The work-from-home workaround is a good temporary solution for the college, since the curriculum developer is taking classes that Rob would be in charge of if he was there. But it’s not ideal.

“How do we live before we get there? What will our employment be? How will we survive between now and then?”

“And everyone knows that,” he says. “I’m trying to develop a curriculum and resources for a cultural context that I am still very much a newbie to, and everything I do needs to be checked over there.

“But there is no doubt that they are so incredibly under-resourced, and everything I do for them can power forward so many of their projects that would have taken much much longer if I wasn’t on board.”

The family’s story of change and uncertainty is repeated across the country, with the plans of many Australians for global mission thrown into disarray by ongoing health and travel restrictions. Like the Falls working with APWM, 14 missionaries with mission organisation CMS Australia are currently unable to get to their planned destinations. Of those stuck in Australia, six are planning to leave for the first time.

Mission agencies are in the unique position of needing to support pre-departure workers for extended periods of time. Missionaries who have committed to going overseas but are not yet able to do so must often find temporary employment, accommodation, and education for their families.

In a pre-COVID world, missionaries with APWM gain access to supporter funds once they have been commissioned for sending. Due to the complexities of border closures and travel restrictions, Rob and El’s financial situation was extensively worked through with APWM.

“Basically we were asking, ‘How do we live before we get there? What will our employment be? How will we survive between now and then?’” says Rob, whose priority was balancing flexibility with stability.

El’s current contract with her hospital was scheduled to end at the end of last year, and the pair planned to be fully supported by donor funds while in Vanuatu. Their eldest child has had to be enrolled in their local public school, too.

Just as APWM has responded to the unusual situation of the Falls and other missionaries, those serving with CMS also can be paid a living wage through the support of ongoing church partnerships.

“We’ve committed to supporting missionaries, and churches are still supporting them,” says CMS Executive Director (NSW & ACT) John Lovell. “So we are very thankful for the fellowship and committed generosity of giving churches in unusual circumstances.”

Lovell says CMS seeks to “work in a personalised way for missionaries and their families,” through the provision of housing and finding sources of temporary work. APWM takes the same personalised approach with its missionaries, as Rob and El exemplify.

For some CMS missionaries, work has taken the form of locum ministry, filling roles in churches in temporary capacities. And online language study can also take up a significant portion of the week.

“The reality is that, even if they went overseas, many missionaries would do their language learning online” due to ongoing Covid restrictions, Lovell says.

Changes to mission plans have been challenging, but not without unexpected fruit.

“We were asking questions like, ‘How long, oh Lord? How long will this go on for? Why now? Why couldn’t this happen in twelve months’ time when we were in Vanuatu, rather than about to go?” Rob said.

El and Rob can see how their season of waiting has better equipped them for the task ahead — particularly El’s midwife experience and qualifications.

“I’m hoping to provide primary healthcare to the rural and isolated villages across South Santo, where we’ll be living,” says El, who is a registered nurse and midwife.

“I was originally a nurse, but decided to do a one-year Graduate Diploma of Midwifery to become a registered midwife, because this is particularly in high demand.”

At the same time, she’s also completing a Graduate Diploma of Divinity through Christ College, which she’ll complete before leaving.

The last year has forced the couple to be innovative in the way they develop financial partnerships. During 2020, the couple ran information sessions about their plans over Zoom, reaching over 100 people. But more striking than the number of attendees was the reach they had.

“We had people join us from Toowoomba, Launceston and Hobart, country Victoria, and all over Sydney,” Rob says. “And many of these folks we had never even met before!”

Paired with a fresh website featuring prayer points, videos and a blog, the couple have seen the benefits of using technology to grow support for their work.

With more lessons learned, they’re ready to go. If – and it’s a big if – they can get to Brisbane to get on a twice-monthly flight to Vanuatu, with their new Vanuatu visas, and then pay for their own two weeks of hotel quarantine, Rob, El, Zachariah, Jason and Asher will get to Talua. Then their work will begin.