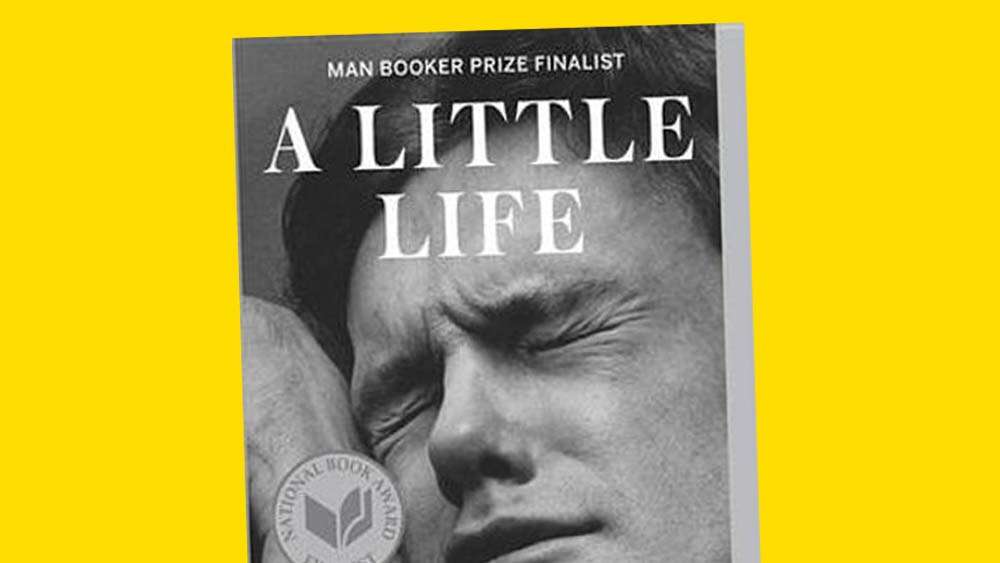 “See what great love the Father has lavished on us: that we should be called children of God!  And that is what we are!” (1 John 3:1)

Regardless of whether you’ve read Hanya Yanagihara’s 2015 novel A Little Life, chances are you’ve heard of it. It’s been promoted as “an immensely powerful and heartbreaking novel of brotherly love and the limits of human endurance”, and it’s become notorious for testing many a reader’s endurance.

Many, myself included, have described it as one of the most traumatic books they’ve ever read.

It’s one of those novels that “forces demands on you that are so immense that you seek consolation from others”, writes Brigid Delaney in The Guardian. “You urge your book club to read it (or you form a book club to that end); you post status updates, you tweet; you give it to other people to read, burdening them so that you’re not left alone with this thing.”

In a nutshell, the “thing” is the story of an abused orphan who goes to college, befriends three bright young men, and becomes a rich, successful lawyer. At its heart, it’s the story of relentless pain, and love, and how impossible it is to ever escape your past or truly start afresh.

(Spoiler Alert: To be fair, though, you have had years to read it …)

The reader learns about Jude’s past gradually – a wise decision on Yanagihara’s part, as she inflicts more pain on him than some will be able to bear, and others, believe.

Abandoned at birth, Jude was raised in a monastery and abused by a series of pedophiles. Brother Luke promises to save him and claims to love him as a son, but after they run away together, he forces Jude to prostitute himself. He sustains Jude with the lie that when they can afford it, they’ll live happily ever after in a cabin in the woods, but then shifts from casting himself as Jude’s father to his lover.

Jude is eventually rescued by police, only to end up in state care where the abuse continues. He escapes but before long, another unconscionable predator takes him captive and almost kills him. He ends up alone and in hospital with injuries he won’t ever fully recover from, but goes on to attend college, make lifelong friends, and build a successful career.

The horrors of Jude’s past, however, haunt him daily. His adult life is lonely and painful despite his vibrant circle of friends. He blames himself for others’ crimes and believes he doesn’t deserve to exist, let alone be happy; he lies to his friends instead of confiding in them, and seeks solace in self-harm. His first lover turns out to be yet another abuser, his second dies in an accident.

It is plain to the reader that for all their faults, Jude’s friends love him and would never blame him for his past, but it is far from plain to Jude. He cannot believe the abuse he suffered was not in some way his fault, that he is not worthless, that he is not “junk”.

Harold and his wife Julia develop a lifelong friendship with Jude. They become like family to him and feel such strong, unconditional love for him that they want to formalise it. Even though Jude is an adult at the time, they propose adoption.

Yanagihara isn’t writing as a Christian, but her depiction of a couple adopting an adult – not a baby but a scarred and troubled man – reminded me, overwhelmingly, of the Christian doctrine of adoption.

Jude is surprised and overjoyed by the proposed adoption; he’s also reluctant to accept it. He tells Harold he’s done things “that good people don’t do”, things he’s ashamed of, that would make Harold ashamed. Harold says he can’t imagine anything that would change the way he feels: “Jude, whatever it is, whatever you did, I promise you, whether you someday tell me or not, that it will never make me regret wanting or having you as a member of my family … I hereby absolve you of – of everything for which you see absolution.”

Jude remains doubtful, as Yanagihara describes. “He felt he had failed once again: failed to confess properly, failed to determine in advance what he wanted to hear in response. Wouldn’t it have been easier in a way if Harold had told him that he was right? That they should perhaps rethink the adoption? He would have been devastated, of course, but it would have been an old sensation, something he understood. In Harold’s refusal to let go lay a future he couldn’t imagine, one in which someone might really want him for good, and that was a reality that he had never experienced before, for which he had no preparation, no signposts.”

I couldn’t relate to Jude’s history of abuse or his addiction to self-harm, but I could relate to his astonishment when Harold and Julia proposed adoption.

The adoption goes ahead, and Harold and Julia love Jude with deep devotion. Part of him “will always be convinced that they will eventually tire of him, that they will one day regret their involvement with him”, but the reader knows this can’t be so. They love him and they always will.

I spent much of this book lamenting Jude’s refusal to entrust more of his secrets to his loved ones so they could challenge the lies he believes about himself and maybe even help him heal. Instead, behind closed doors, overwhelmed by shame and self-loathing, Jude cuts himself with razor blades.

I couldn’t relate to Jude’s history of abuse or his addiction to self-harm, but I could relate to his astonishment when Harold and Julia proposed adoption. As a Christian, I not only believe that a perfect God adopts undeserving mortals; I believe he has adopted me.

It’s not that I deserve it. I’ve done nothing to earn my Father’s love and much to spurn it. Unlike Jude’s misplaced feelings of shame and unworthiness before his adoptive parents, mine before God are appropriate. I’ve despised and rejected my maker, I’ve loved myself and the things of this world more than him. I am unworthy. But I am also forgiven, beloved. It sounds too good to be true; but does that make it false?

Writing about A Little Life in The New Yorker, Jon Michaud says the book presents a godless world with no possibility of redemption and deliverance beyond tender moments, noting that Jude’s tormentors aren’t termed “evil”, even by him.

In an interview published by Foyles, Yanagihara says she never considered giving Jude a happy ending: “I always knew that the book would be his slow awakening to the fact that he’s just too damaged to recover, that he is, in a fundamental sense, irreparable,” she says.

His past was destined to overwhelm him; to leave him with only one option, according to the book’s author. “And I think it was the right one, the only one.”

There is a book that does. It claims broken people can be redeemed, and that evil will be punished. There is hope for the Judes of this world, there is hope even for the Brother Lukes. Jesus came to seek and save the lost. If we repent and trust in him, he pays for all our sin.

The idea of being bought, of belonging to anyone, might strike us as terrible if we think of God as a control freak or a bore, and ourselves as doing just fine on our own. But if we see ourselves as helpless and unworthy – if we see God as a loving father – it’s a beautiful, astonishing relief.

Jesus said, “Come to me all who are weary and heavy laden, and I will give you rest.” It sounds too good to be true, but that doesn’t make it false. We deserve to be punished, but are offered grace; we deserve to be cast out, but can be adopted in.

Meredith Lake’s The Bible in Australia wins another accolade

ABC Television’s The Book Club will air its final show tonight, after more than a decade…