Is talk of 'miracles' really just an embarrassment?

In case you hadn’t noticed it already, the Bible is a book that claims supernatural events have occurred in history. Through Moses, Yahweh called down plagues on Egypt, held back the Red Sea and provided food and drink in the desert. The prophet Elijah was able to demonstrate Yahweh’s power through the burning of a sodden altar at the showdown on Mt Carmel. Elisha brought a dead boy back to life.

In the New Testament, the miracles are if anything more highly concentrated. Jesus is not simply a teacher and a prophet: he is a miracle worker. He heals the sick, he casts out demons and he has an extraordinary power over the natural world. He walks on water and he calms the storm. He brings life to a little girl and to his friend Lazarus. The miracles recorded in the Acts of the Apostles tend to mimic his.

Since that great intellectual movement called the Enlightenment in the 18th century, miracles have been increasingly thought of as an embarrassment to Christian faith. This embarrassment has not decreased. 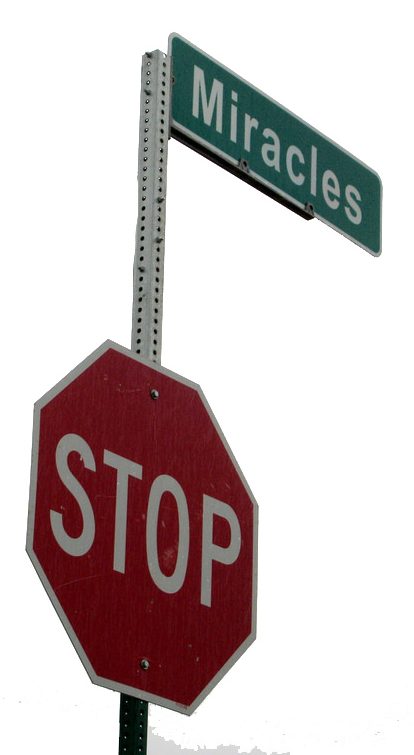 It almost goes without saying that the whole Christian gospel relies on a miracle: namely, the resurrection of Jesus from the dead. A Christianity without the miraculous becomes simply a tepid moralism.

Since that great intellectual movement called the Enlightenment in the 18th century, miracles have been increasingly thought of as an embarrassment to Christian faith. This embarrassment has not decreased.

This was for two chief reasons. First, as it became increasingly possible to understand the operation of the laws of nature, it seemed more and more as if an appeal to the supernatural was the way the ancients coped with things that were beyond their understanding.

We cannot use electric lights and radios and, in the event of illness, avail ourselves of modern medical and clinical means and at the same time believe in the spirit and wonder world of the New Testament. And if we suppose that we can do so ourselves, we must be clear that we can represent this as the attitude of Christian faith only by making the Christian proclamation unintelligible and impossible for our contemporaries.

This is a challenge which bears taking seriously. Reports of miraculous events are not easy for our contemporaries to accept, and we have to understand that we understand the world in a very different way to the ancient writers who reported miracles to us.

Secondly, it seemed theologically difficult to imagine the great creator God, the maker of the “spacious firmament on high” (to quote Addison’s hymn) would dirty his fingers by sticking them somewhat crassly into the midst of human affairs. It simply seemed beneath him.

The Scottish philosopher David Hume was the greatest critic of the miraculous of his day. He wrote:

Nothing is esteemed a miracle, if it ever happen in the common course of nature. It is no miracle that a man, seemingly in good health, should die on a sudden: because such a kind of death, though more unusual than any other, has yet been frequently observed to happen. But it is a miracle, that a dead man should come to life; because that has never been observed in any age or country.

I don’t think Hume’s argument is a good argument, but his intuition – that reports of miracles are to be treated with scepticism, not incredulity – is right.

Hume’s argument has been criticised for being circular, which indeed it is. He defines a miracle as “that which has never happened in the common course of nature”. Since a miracle by definition cannot happen “naturally”, Hume pretty much defines the possibility of a miracle away. The only exception he allows is if the reported miracle were to be witnessed by a sufficient number of people of honesty, intelligence and education.

I don’t think Hume’s argument is a good argument, but his intuition – that reports of miracles are to be treated with scepticism, not incredulity – is right.

But the Bible is far more reticent about the miraculous than we might suspect. I am certainly not the first to observe that miraculous events are clumped around the two great salvific moments in the Bible – the Exodus, and the coming of the Messiah. The career of David, for example, is not marked by the miraculous in the same way as that of Moses and Jesus.

And the reactions of the writers of the Bible and those about whom they write suggest that they are “amazed” at what they see when they witness a miracle. Which is to say: they already have in place implicitly what Hume thought was a discovery of his age, namely, that supernatural events are simply not the ordinary way things work. They aren’t in the ordinary run of things, and the ancients knew this.

I’d like also to pick away at a couple of other threads in thinking about miracles in the Bible. The first is that the Bible uses words to describe these events which are very deliberately chosen. John uses the word “sign”. For him, Jesus is not simply displaying superpowers, but communicating to people through symbolic actions. Turning water into wine wasn’t just a party trick (though it was certainly appreciated by those who drank the wine), it was an act that was meant to convey a message. Feeding the five thousand was meant to echo the feeding of the people in the wilderness in Exodus, and thus link Jesus’ identity to Yahweh the God of Israel.

In Matthew, Mark and Luke, the word chosen to describe what we call “miracles” is roughly translated as “acts of power”. Once again, they are a signal of something about Jesus himself, not simply demonstrations of trickery. “Who is this, that even the wind and the waves obey him?” asked the disciples. And the answer once again is: this is the man of Yahweh.

The miraculous acts of the Synoptic Gospels often serve to establish Jesus’ true humanity, rather than his divinity. That is: we see him fulfilling the divine commission to Adam in the garden, to rule over the creation as God’s representative on the earth. This helps us to see that the division between “natural” and “supernatural” is not as straightforward as we think, since the “natural” is not what it once was on account of the fall. What we know as “natural” is not what was originally “natural”. What we see in Jesus is not a disruption of the natural, but a restoration of the truly natural. What could illustrate this better than his resurrection from the dead?

When the God of Scripture performs supernatural acts, he does not do so because he is not otherwise in control of events.

This way of thinking may help us with thinking about spiritual gifts. In the contemporary world, inordinate emphasis has been placed on supernatural gifts as evidence of true spirituality. However: gifts like healing, exorcism and prophetic words are known in non-Christian religions as well (and even among those with no religion at all). We are better to understand these gifts as part of the normal human way with the world. What makes them “spiritual” (if they are) isn’t their “miraculous” nature: it is that they are done in the name of Jesus and for the building up of his church.

But we still have to think about the complaint that the miraculous acts of the Bible are an embarrassment to the grandeur of God and his providential action in maintain the universe. Nick Cave sang that he didn’t “believe in an interventionist God”.

We need to consider the real form of these so-called interventions. When the God of Scripture performs supernatural acts, he does not do so because he is not otherwise in control of events. He does so because of the communicative power of the intervention. It is almost always to reveal his identity to people not simply as creator – the miracle of creation, which should be miracle enough, is all around us – but also as redeemer. He is not simply distant, but enters the world to remind us that he is not far from every one of us (Acts 17).

These events do not embarrass or belittle him: they reveal him not simply as the God of remote power, but as the God of saving love.

Michael Jensen is the rector of St Mark’s Anglican Church in Sydney and the author of several books. What do Game of Thrones finale and Federal Election 2019 have in...