A high-achieving woman in her forties, Lisa recently started visiting a counsellor who diagnosed depression and put her on medication. Lisa explained to the counsellor that at work she feels like a minnow swimming in a pond of sharks—not only is she ineffectual and powerless but she is vulnerable to being swallowed up at any time. 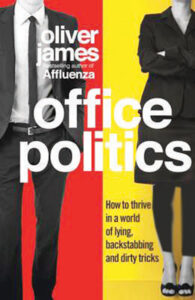 Grant, who has never been less than diligent in his work and popular with his colleagues and clients, was told recently by his boss that he considered him somewhat of a liability to the team. His boss has several times emailed him job ads from other companies. Grant does not want to leave, but wonders how he is going to survive where he is. How can he express the virtues of loyalty, when no trust is being offered?

The experiences of Lisa and Grant are, of course, all too familiar. It turns out that for many, many people, the experience of life in the workplace is not simply about earning a
living and doing something meaningful. The workplace can be a cauldron in which it feels like the very fibres that constitute your being are being softened and pulverised. At first, you think that you are going to work to do a job, and do it well, and that for doing it well you will be rewarded. But it turns out that work places are far more complicated than that: they are thoroughly political. It’s a dog-eat-dog world, which means that the winner is always a dog.

As Oliver James (author of the best-selling book Affluenza) explains in his new book, Office Politics: How to survive in a world of lying, backstabbing and dirty tricks (Vermillion, 2013), office politics are simply inevitable. Workers don’t have the option of standing piously by and imagining they will be above the wrestle. In fact, James argues, the only way to survive in an emotionally healthy way is to engage in office politics well, by which he means ethically as well as skilfully.

But this is a very big ask! Building on well-regarded scientific studies of human behaviour, James notes that contemporary workplaces are actually increasingly the domain of certain toxic personality types: the machiavel, the psychopath and the narcissist. In fact, there are those who combine all three tendencies, whom he labels “triadic”. His claim is chilling:

“The awful truth is that the number of such triadic people has greatly increased in the last thirty years, how much depending on what country you live in. The reason is because the global economy increasingly demands elements of triadic behaviour in order to succeed. This is especially true of English-speaking nations…”

For James, survival in the workplace is going to require some acting, some flattery and even some of what he calls “dirty tricks”. We are simply deceiving ourselves if we don’t think that we use deceit in the workplace. As he says:

“If you are someone who is conscientious, honest and rational, and who regards office politics as antithetical to these traits, think again. Assuming you want to get your way in the workplace, you may be betraying yourself if you do not use astuteness and appropriate tactics to advance your cause.”

The bottom line (as James sees it) comes when you have betrayed your sense of your authentic self. At this he draws the line. Some dissembling and pretence is needed simply to survive, he says, in the contemporary workplace. But above all, authenticity is what you need to maintain. When you feel that your personal authenticity is compromised, then you need to think about an exit strategy. Authenticity means “you have a core sense of who you are, and what is true, real and ethical”. This idea, he hopes, will help you to navigate your way through the tricky shoals before you. Perhaps you do need to flatter the boss, or pretend you are willing to do something that you aren’t. But you shouldn’t do so in such a way that your authenticity is compromised.

This was the gaping hole at the heart of James’ otherwise insightful book: how do I know what my authentic self is? How can I discover it, let alone keep it?

One of the devastating effects of a sour workplace situation is the way in which it causes us to doubt the very sense of a solid inner-self. We begin to wonder if we are who we thought we were all along. It can become a profound existential dilemma, in which our emotional wellbeing and sense of identity are challenged to the very core.

What, then, is a Christian to do? Is there another perspective engendered by Christian faith that opens up a different set of possibilities for the person who finds themselves in the middle of out-and-out office warfare?

How does the kind of cunning that Oliver James commends mesh with a Christian view of the self? Has a Christian any other options but retreat or capitulation?

The answer is yes, but that is not to deny the difficulty and pain of what may occur to us in the workplace. Christian is he or she who knows that they are not their own, but bought at a price (1 Cor 6:19-20). They have died to self, and put on Christ. They are the person who can say with Paul that ‘I have been crucified with Christ and it is no longer I that lives, but Christ who lives in me’ (Gal 2:20). A person is not justified by their work just as they are not justified by their works.

We are not what we do, however much it may feel like we are.

These words name a spiritual reality that Christians can count on, whether they know it or not. ‘If anyone is in Christ – behold, a new creation!’ says Paul. But they can easily become simply a pat slogan, and not a foundation for a life lived in an uncertain world. What we need to do, then, is to absorb this reality into ourselves. How does this happen? It happens as we direct ourselves to God by meditating on the Scriptures, in prayer, in praise and in the gathering of God’s people. These activities are likes schools of the self: they are the habits that should tell us who we really are. As we continually focus on our dependence on God for our existence and for our re-birth by means of the blood of his Son, and on the source of life we have in the Holy Spirit, we give ourselves a chance of knowing who we really are.

If you are in Christ, this is your ‘authentic self’. And like most things in the Christian life, it is not something we achieve, but something we receive and realize. That is, we need to work it out in the circumstances that face us, however dire, but we have the great confidence that our selves are held for us by Christ in God. Who we are is actually not on the line, however much it may seem like it.

This can be incredibly liberating, because it may give you the freedom to leave a poisonous work situation or to relinquish your ambitions when it is not possible to achieve them without out and out compromise. It gives you a particular purpose for being in the workplace, too: to be a visible sign – a witness – in your actions and relationships of this Christ-shaped you.

The apostle Peter’s words to slaves in 1 Peter 2 may apply to us in the workplace too. Granted, the situations are not exactly the same: we may have the freedom to leave a workplace or retrain for another career. We have to remember that Peter is talking to people who don’t have an option. But nevertheless: Peter tells Christian slaves to bear up under unjust punishment and make sure they do not incur a just punishment. This is a way to point to Christ – didn’t he do the same? He was tortured, but did not retaliate. He did not operate out of revenge or envy, but sought only to do good and so silence the talk of ignorant people.

Can we see this working at work? In the short term, in fact it may not ‘work’. When we go to work, the Christian’s aim is not to play the dog-eat-dog game, but to avoid becoming a dog at all. This may mean that your most precious ambitions are not going to realized. It may mean that you cannot continue where you are. Coming to terms with this may be very painful.

But it is the one strategy that in fact ‘works’ in the final analysis – since it shows how solid the reality of Jesus Christ is. And that hope is the circuit-breaker we need in that situation that seems utterly overwhelming.

There’s much more to say, I realize. In fact, I’d love a conversation to begin about this. Why not say what you think on my Twitter feed? @mpjensen

A verse that has been sitting on my heart for a while is Proverbs 16:9,…