Sudan, the world’s last male Northern White Rhino, died in Kenya last month, leaving only two females of his subspecies alive to save it from extinction. The rhino was 45 years of age, which is elderly for the species. He was euthanised by a veterinary team after his health deteriorated significantly, having reportedly battled age-related issues and multiple infections for some weeks.

The tale of Sudan and the perilous position of the northern white rhino is not a single, tragic volume in Earth’s story. Rather, it is an ongoing theme that has seen the Pinta Island Tortoise, Caribbean Monk Seal, Western Black Rhino, Mariana Mallard, Pyrenean Ibex, Alaotra Grebe duck, and Black-faced Honeycreeper, all become extinct since the year 2000.

In 2014, the World Wildlife Fund UK’s Living Blue Planet Report declared that the Earth had lost half its wildlife during the past 40 years. Its findings on the state of the earth’s oceans was even more alarming, with Director General of WWF International Marco Lambertini writing, “The picture is now clearer than ever: humanity is collectively mismanaging the ocean to the brink of collapse.” 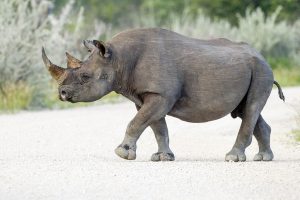 The Western Black Rhinoceros that was officially declared extinct in 2011—due largely to poaching—while the three other remaining subspecies of black rhinos are still critically endangered. By Yathin S Krishnappa (Own work) [CC BY-SA 3.0 (https://creativecommons.org/licenses/by-sa/3.0)], via Wikimedia Commons

For Christians, reports like these, as well as the story of Sudan and other extinct species (such as those collated in this Buzzfeed article), are a stark reminder of the negative impact that humankind has upon the Earth’s creatures. Also, they are a call to re-examine what the Bible has to say about the responsibility Christians have to care for creation.

This is not a new conversation, of course. St Francis of Assisi was born in Italy in the 12th century and was known as the patron saint of animals and ecology. He is famously remembered as considering all created things – including animals, birds, fish, the sun, moon and the sea – as his brothers and sisters in Christ. He even went so far as to preach to birds and animals.

If any of us are tempted to dismiss St Francis as being a bit too extreme to be a relevant example nowadays, he’s also credited with this quote: “If you have men who will exclude any of God’s creatures from the shelter of compassion and pity, you will have men who will deal likewise with their fellow men.”

Stuart Pimm, the Doris Duke Chair of Conservation Ecology at the Nicholas School of the Environment at Duke University, studies present-day extinctions and what can be done to prevent them. He told the New York Times: “I’m a believing Christian. ‘God so loved the cosmos that he gave his only son.’ That’s an injunction from St. John. To me, this says that Christians have an obligation to look after the world — stewardship. We cannot pointlessly drive species to extinction and destroy forests and oceans. When we do that, we are destroying God’s creation.”

Popular conservative biblical teacher John Piper, though, has argued for a restrained stewardship that puts the focus on humans: “I think the best argument for environmental concern is love for people, not love for mother earth. Who cares about mother earth as a mother? The earth is the Lord’s and the fullness thereof. It’s his and he meant it to serve people. He put us here to enjoy it. So, if we mess it up we are hurting people.”

One of the most obvious factors in species extinction is that of poaching.

Poaching has led to all five remaining rhino species worldwide being considered under threat of extinction, with the Western Black Rhino declared extinct seven years ago. This is due to the trade in rhino horn currently being a more lucrative industry than drugs, largely as a result of the popular belief in Asia that rhino horn can cure various illnesses.

Consequently, in the days leading up to Sudan’s death, the rhino had been so threatened by poachers, that he was placed under 24-hour armed guard at his home in the Ol Pejeta Conservancy in Kenya. In addition, radio transmitters were placed on other animals, and incognito rangers were dispatched into neighboring communities to gather intelligence on potential poachers.

Researchers have now gathered some of Sudan’s genetic material in the hope of successfully artificially inseminating one of the two females left, his daughter Najin, 28 and his young granddaughter, Fatu, in a desperate attempt to save the species from extinction.

“We can only hope that the world learns from the sad loss of Sudan and takes every measure to end all trade in rhino horn.” – WildAid CEO Peter Knights

“We can only hope that the world learns from the sad loss of Sudan and takes every measure to end all trade in rhino horn. While prices of rhino horn are falling in China and Vietnam, poaching for horn still threatens all rhino species,” said WildAid CEO Peter Knights.

However, poaching is not the only threat to Earth’s species, as discovered by a global group of primatologists who recently assessed the conservation status of all 504 primate species (monks, chimpanzees, lemurs, etc) and found that 60 per cent of primate species are threatened with extinction and 75 per cent are declining in numbers.

Their research published in the Science Advances journal found that, although hunting and illegal animal trade are threats to primates, the greatest threat is losing their habitat when it is logged or converted into farms or ranches. In addition, various combinations of road construction, oil and gas extraction, mining, pollution, disease and climate change are a significant threat to primates.

“Without action, these numbers will grow and more species will disappear forever. This dismal situation is our fault,” wrote Jo Setchell, Professor of Anthropology at Durham University and one of the primatologists involved in the study.

“The threat to primates is a result of political uncertainty, socio-economic instability, organised crime, corruption, and policies that favour short-term profit over long-term sustainability… Biologically, extinction is a normal phenomenon. Species evolve, and species go extinct. From time to time in Earth’s history, mass extinctions have wiped out huge numbers of species globally. However, we cannot accept that we, as one primate species, drive others to extinction when are still able to prevent it.”

For many Christians, her words, along with the story of Sudan, the last male Northern White Rhino, must surely send us back to the Bible, and to reflect on God’s instructions to Noah: