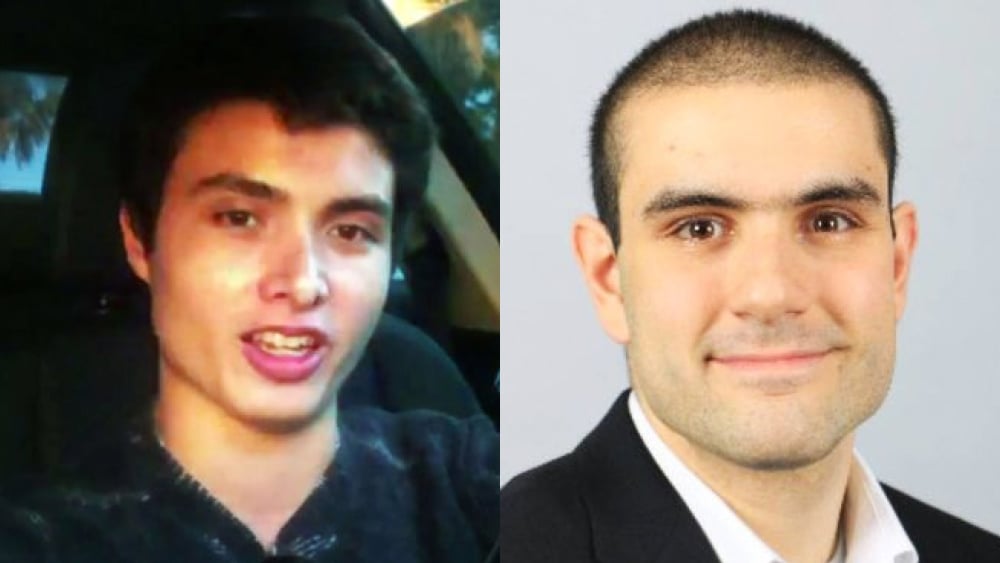 Elliot Rodger (left) and Alek Minassian from the Incel movement.

Alek Minassian, a 25-year-old man, stands accused of murdering 10 people and hospitalising 15 after he allegedly drove a van into a group of pedestrians in Toronto last week. He was a part of the Incel (Involuntary Celibacy) online community, composed of disenfranchised men who obsess over the deeply misogynistic belief that sex is a form of currency in which women control the purse strings.

In the Incel movement, we see an insidious twisting of human desire that fuels an evil, toxic logic of revenge.

Elliott Rodger is an Incel leader and hero who Minassian referenced on social media moments before his deadly attack. Rodger killed six people in a stabbing and shooting rampage in a Californian college town in 2014. He had previously written: “I will enter the hottest sorority house of UCSB, and I will slaughter every single spoiled stuck up blonde s*** I see inside there. All those girls that I’ve desired so much, they would have all rejected me and looked down upon me as an inferior man if I ever made a sexual advance towards them. While they throw themselves at these obnoxious brutes. You will finally see that I am in truth the superior one. The true Alpha Male.”

In the Incel movement, we see an insidious twisting of human desire that fuels an evil, toxic logic of revenge. When we look at modern culture today, with movements fuelled by hatred between the sexes like Incel and an ugly culture war based on a toxic obsession with one’s sexual or romantic satisfaction, we see that more than ever, Jesus’ model of a deeper ascetic life is desperately needed. We see dangerous kinds of logically related libertinism and asceticism, fuelled by the commodification of desire that says, “It is my right to have what I desire,” or “if I can’t have it, I’ll deny it to show how strong I am, or destroy what gets in my way from getting it”. History repeats itself.

Because we have suppressed our desire for God by turning to every other kind of desire, especially the sexual kind, we have lost the social imagination to see our lives in the frame of a far greater transcendence.

The anthropological crisis of how to understand human desires, and the identities attached to them, has reared its ugly and fatal head. Tim Winton recently spoke out on this related to the release of his new book, The Shepherd’s Hut: “Toxic masculinity is a burden to men. I’m not for a moment suggesting men and women suffer equally from misogyny, because that’s clearly and fundamentally not true. And nobody needs to hear me mansplaining on the subject of the patriarchy. But I think we forget or simply don’t notice the ways in which men, too, are shackled by misogyny. It narrows their lives. Distorts them. And that sort of damage radiates; it travels, just as trauma is embedded and travels and metastasizes in families… Misogyny, like racism, is one of the great engines of intergenerational trauma.”

The place we find ourselves in as a society is an economy driven by purchasing, buying, attaining and consuming whatever we want. The world screams at us, “if you don’t have these things you won’t be whole,” and yet we drink the Kool-Aid of disordered desire. That is what drives so much of our sexualised society, and God’s solution has been relegated to the side. Incel is just one example of toxic and abject masculinity produced by it. Because we have suppressed our desire for God by turning to every other kind of desire, especially the sexual kind, we have lost the social imagination to see our lives in the frame of a far greater transcendence. For me that was found in the beauty of divinely-inspired human love, and a man who was the perfect paragon of it, Jesus Christ. Jesus came to redress and redeem the issue of human desire with his own life, and also to break an age-old conflict between the sexes (see Genesis 3).

As a celibate gay man, I found freedom from this issue by following Jesus.

As a celibate gay man, I found freedom from this issue by following Jesus. I am often misunderstood, asked to justify myself by the general culture or seen as an alien figure. I’m told that being gay is necessarily about having gay sex – and I disagree. I’m just a regular, stock-standard human that has found a deeper way to live by following Jesus Christ. And, I just happen to be gay. And, I just happen to have found an unexpected joy in voluntary celibacy. For many years I dated, obsessed about relationships and my romantic life, built my whole happiness on fighting for marriage rights and then something happened. The Cross broke into my life, and I discovered the joy of voluntary celibacy – a way to reconcile my new-found faith and my sexual orientation. I will be telling that story in my upcoming book, A War of Loves, released in October this year.

Anglican theologian Sarah Coakley suggests the way forward is to learn to find a more fundamental desire for God, through which all of our other desires can be educated and purified. We must embark on a ‘quest for a holy and devout life . . . the presumption of the need, in a fallen world, to chasten and purify all our desires before God.’ That is the call of discipleship we find in Jesus Christ.

Only in the self-denial of the cross can we restore the relationship of the sexes.

I believe that is why Dorothy Sayers, as a woman who dealt quickly with misogyny, could find in Jesus the paragon of masculinity our society is crying out for, “Perhaps it is no wonder that the women were first at the Cradle and last at the Cross. They had never known a man like this Man – there never has been such another. A prophet and teacher who never nagged at them, never flattered or coaxed or patronised; who never made arch jokes about them, never treated them either as “The women, God help us!” or “The ladies, God bless them!”; who rebuked without querulousness and praised without condescension; who took their questions and arguments seriously; who never mapped out their sphere for them, never urged them to be feminine or jeered at them for being female; who had no axe to grind and no uneasy male dignity to defend; who took them as he found them and was completely unself-conscious. There is no act, no sermon, no parable in the whole Gospel that borrows its pungency from female perversity; nobody could possibly guess from the words and deeds of Jesus that there was anything “funny” about woman’s nature.”

The love of God was what led me to a self-denial that reflected Jesus’ example. That is the kind of self-denying love for God and neighbour that all human beings need to return to, but particularly the men of today. Misogyny is an arch and wicked sin driven by the disordered desire of our human Fall from relationship with God. Only in the self-denial of the cross can we restore the relationship of the sexes. Only when men love women as Christ loved us all and women reciprocate with the same cruciform love will we find any peace. Only by dying to self and laying down your life for the other can help you see the other as they are. How I long to see this between all people, but particularly, to put an end to groups like Incel and toxic masculinity forever. Here is where the most brilliant and universal intimacy is found that can finally reconcile all of us to each other and God.

David Bennett will be telling his story from being an anti-Christian gay rights activist to meeting God in a pub in “A War of Loves” published by Zondervan later this year. He is completing postgraduate studies in theology in Oxford.

Church unity: one of many pandemic opportunities

Hope should move us to action, says Tim Winton