Dissecting his words to Australia this week – for better and worse

It’s Sunday. Your pastor has just preached a sermon, which some thought was average, others fell asleep and a minority found inspiring. Then, over the church’s loudspeaker, members of the congregation are invited to tell the pastor exactly what they thought about the talk – the bits they liked or didn’t like, and their ideas for improvement on technique and delivery.

This must be kind of what it feels like for Franklin Graham after his Sunday night sermon in Sydney – except the loudspeaker resounds on a global scale.

As the dust settles on Franklin Graham’s 16-day, six-city tour of Australia, a group of Sydney-based Christians got together to “deconstruct” the crusade.

The discussion, framed initially as one about “event evangelism”, took place this week on The Pastor’s Heart podcast, hosted by Anglican minister Dominic Steele (who was quoted last week by Eternity about Graham’s support of US President Donald Trump).

Steele was joined by guests who had all attended Graham’s final event in Sydney on 24 February: Ross Ciano, also a pastor of an inner-city Anglican church; Sam Chan, an evangelist with City Bible Forum and author of Evangelism in a Skeptical World; and Christine Bransdon, a Millennial, a Scripture teacher and Anglican church member from south-west Sydney.

After an initial chat about the pre-Graham worship – led by Steve Grace, Planetshakers and David Crowder – which all agreed to be “loud and energetic” (but not to everyone’s taste), the conversation moved to demographics.

Again, there was agreement that the spread of ages and cultures at the Sydney event was encouraging, particularly in light of the fact that “a lot of Franklin Graham detractors … link him with the white middle-class evangelical demographic of America,” as Bransdon succinctly put it.

But then came the real crux of the conversation, to which a large chunk of the podcast was devoted: how would you rate Franklin Graham’s sermon?

Ciano initially baulked when asked to sum up Graham’s talk. “I really feel uncomfortable critiquing someone who is older than me,” he said, at which point he was reminded by Steele that critiquing sermons is “part of your bread and butter” as a minister who trains others.

“It was almost like the whole statement of faith.” – Sam Chan

And so began the dissection of Graham’s sermon, which was given a big tick all round for its gospel content. According to Chan, it contained all the “Bible badge-markers”: the cross; sin; the need for repentance; Jesus as Lord, saviour and the son of God.

“It was almost like the whole statement of faith,” he said.

“[It was] theologically very conservative and orthodox. Anyone who heard that that night, there’s no way they could stand before God and say I did not hear the gospel, I did not have a chance to repent. In that sermon alone, you had everything you needed to hear the gospel and repent …”

However, according to these commentators, the structure of the sermon was rather lacking. It didn’t “introduce a felt need” or follow an exegetical structure in examining the Bible passage of Luke 19. The Pastor’s Heart group also questioned how Graham used allegory. 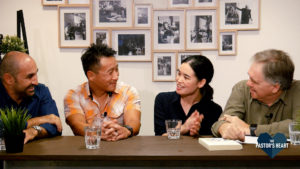 “If I had to mark this, if it was not Franklin Graham but an anonymous paper that came to me, I would say this would have really worked in Australia 40 or 50 years ago – like [for] a Baby Boomer, tradition, duty generation,” said Chan. “Back then, evangelism was asking someone to believe what they already knew to be true, and that’s all Franklin Graham was doing.”

He conceded: “For that group, that night, hundreds came forward, so he actually got it spot-on for that group.

“But for the groups I evangelise, like high school students or at Sydney University campus, I’d say you’d have to try different metaphors, different strategies.”

“I wouldn’t be using that as a model for an evangelistic sermon. However … good on him for preaching the gospel.” – Ross Ciano

Ciano summed up similarly, saying: “In terms, of a model for students, I wouldn’t be using that as a model for an evangelistic sermon. However, I want to say good on him for preaching the gospel because that’s really important that he got that through.”

Discussion ensued about Graham’s insensitive references to guns, shooting and even smacking children, as well as his clumsily handled comments about same-sex marriage and abortion.

“You do need to consider your audience and you don’t want to unnecessarily distract them with things like same-sex marriage and abortion, which are right now extremely political … when really you just want them to focus on who Jesus is,” Bransdon pointed out.

Ciano agreed: “If you’ve only got 25 minutes, some of these [topics] are really big landmines and you haven’t got time pastorally to go through all those categories.”

After the dissection of the sermon and comparisons to the speaking style of Jordan Peterson, a comment by Ciano summed up the conclusion reached by all commentators: “Let’s keep banging on about Jesus and what he came to do.”

And, after all is said and done, and despite the controversy plaguing Graham, isn’t that precisely what every good preacher sets out to do?