Searching for a ‘thrill of hope’

I arrived three days late to Advent this year.

Of course, I’d been reading all the Advent devotionals since December 1. In fact, I’d spent a good amount of a bus trip to Canberra contemplating Advent on December 2nd. I’d even been toying with the completely unrealistic idea of studying up for Advent through the whole of 2019, in the hope of cultivating a deep understanding that would enable me to write something valuable about Advent in 2019. But something just wasn’t connecting.

It wasn’t until Monday morning, on the lawns of Australia’s Parliament House, surrounded by 200 Christians who were in town to meet with Australian politicians and ask them to increase funding for Australian aid, that Advent really got me.

Brad Chilcott, Founder and Director of Welcome to Australia and a dear friend, stood before me on the microphone, addressing the crowd. He was talking about funding cuts to programs that process refugees in Indonesia and Myanmar, leaving the people who have fled there searching for asylum, waiting on the UN’s refugee processes with no real hope of future resettlement.

“They’ve fled their country of origin and whatever experience they felt compelled to flee from, and now they’re stuck in Indonesia without a sign of hope.”

Where had I read words like that recently? I wondered. Something tugged at the edge of my mind, but I couldn’t quite grasp it. I returned to the task at hand. I was here to capture stories.

A few hours later it occurred to me that his words were similar to an Advent devotional I’d read the day before.

This Sunday, light a candle named Hope at your table with your people because it is still dark outside. But it won’t be night or dark grey days forever and right now, there are glimpses of the Kingdom still breaking through. There is light enough by which to live: speak hope. —Sarah Bessey

I try to imagine what it might have felt like to be on the BC side of Jesus. How it might have felt to live in a community that believed the Messiah was coming, but that hadn’t seen him yet. How the thrill of hope might have pulled people through the weariness of the ancient world’s injustices towards an age of Emmanuel, God with us.

“Hope deferred makes the heart sick,” says the writer of Proverbs. Hope, it seems, is God’s design to get us through the winter seasons of life.

The following day, Brad leaned across a table in Parliament House’s café and told me that while Australia spends billions of dollars every year deterring refugees from trying to find safety in Australia, our government has cut funding to the programs that process refugees in our region. As a result, 14,000 displaced people are trapped in Indonesia, waiting to have their claims processed by the UN High Commissioner for Refugees to find out if they can be resettled somewhere else, without adequate support.

“So now what we have is 14,000 people – not to mention the hundreds of thousands of Rohingya in Myanmar – desperately wanting a sign of hope that they have a future. They’ve fled their country of origin and whatever experience they felt compelled to flee from, and now they’re stuck in Indonesia without a sign of hope.”

No melodic thrill of hope for those who are the world’s weary left waiting. 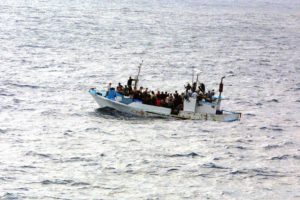 “They’re spending billions on deterrence, but what really stops a person getting on a boat to Australia – engaging a people-smuggler, risking their lives and the lives of their family – is that there is hope. That there is another way,” he explains.

Brad believes that any time a person makes the risky decision to get on a boat, it’s an indication that they’ve completely run out of hope. His words make sense of the images we’ve all seen on TV that have left us asking “What kind of a person puts their kid on a boat?”

Along with other advocates, he’s asking the Government to increase funding to the UNHCR to $100 million and says “the outcome would be empty detention centres, and no one needing to risk their life for paying a people-smuggler and taking a risky boat journey, and an increase in people displaced people being resettled.”

I told him that I’m always nervous about pointing Australians to weigh up the economics of an issue, as if it’s a valid measure for deciding moral questions.

I told him that I’m always nervous about pointing Australians to weigh up the economics of an issue, as if it’s a valid measure for deciding moral questions. He agrees. But there’s more than mere ideology behind his response.

“I think everyone has known forever we’ve saved money by not doing offshore processing. But that hasn’t been an argument that has won the public or won the government over, so I don’t think an economic frame on this discussion is the right one.

“It’s more that for a fraction of what we spend now, we can make a massive difference in a positive direction, alleviating the very problems that the government and opposition have talked about for a long time – irregular migration. Whether you talk about people drowning or talk about a uncontrolled borders, either way this solution just alleviates that issue by giving people hope.

“What we want to see is people in the region who have fled their country of origin have a safe pathway to a site that offers a life of peace and safety. We don’t want anyone to get to such a desperate situation that they engage a people-smuggler and take that risk. Without hope, that pressure will always be there to take that option.”

There’s that word “hope” again. And it’s such an abstract one.

In my university days, my poetry teacher, the Australia poet Judith Beveridge, would instruct us to either avoid abstractions or “put skin on them.” She’d tell us to use sensual imagery that would guide our readers to see what an abstract concept like hope looked like, sounded like, smelled, tasted and felt like under your fingertips.

As much as the human heart seems wired to need hope, the human mind seems most equipped to make sense of hope when we can put skin on it.

As much as the human heart seems wired to need hope, the human mind seems most equipped to make sense of hope when we can put skin on it. God knew it as he took on the frail form of a human baby, as he became what Eugene Petersen in The Message so eloquently described as “flesh and blood” that “moved into the neighbourhood”.

In the Advent season, as we wait for the world to be made right by Christ’s coming, it is the thrill of hope that he really is coming that draws us forward through the weary world and that sustains us. Of course, I know that hope of salvation personally, and have found it to surpasses any kind of hope experience outside him. Yet I’m struck by the need for hope in all and any of it’s many forms, that seems to be imprinted in all humans.

I wonder what it is that sustains those people who have fled their homelands and landed in Indonesia in the hope of a safe place to rebuild their lives and make a home?

I wonder what it is that sustains those people who have fled their homelands and landed in Indonesia in the hope of a safe place to rebuild their lives and make a home? Many of them don’t yet know Jesus, the thrill of hope that is Advent’s message. So what draws them forward through the weary world? How do they carry on without hope? Or don’t they?

I’ve written many stories this year, but a couple of months ago I wrote a story about Eddie Cheraghi – an Iranian man caught in the worst of our immigration policies – that hit me to my core. It was the most hopeless story I’ve encountered. There was no redemption. No Eternity-News-styled “seriously good news. Unsurprisingly, it was not the most popular story I’ve written. That said, I think it might have been the most important work I did in 2018.

I thought of Eddie Cheraghi as I reflected on Advent – three days after it started.

And so, I thought of Eddie Cheraghi as I reflected on Advent – three days after it started. I thought of the 1400 people in Indonesia Brad had told me about, who are at risk of getting on a boat because they’ve been given no other reason to hope. And of the children on Nauru or under guard in Australian hospitals who have been diagnosed with “resignation syndrome” as a result of hopelessness.

And writing now, as a woman who is grateful for the thrill of hope I have in Jesus, who is confident in his coming and bringing good news for all of humankind, I nonetheless find my heart aligned with the hopeless this year, praying ‘Lord have mercy. Christ have mercy’.