For almost three years, Iranian Christian convert Edris Cheraghi was in immigration detention, with no way of challenging his fate.

A United Nations working group has told Australia that Cheraghi’s detention was arbitrary, and in contravention of international human rights laws. It is calling for immediate changes to Australian law.

Cheraghi is an asylum-seeker. He is an Arab Kamari, an ethnic minority group persecuted in the country of his birth, Iran. His family’s land was confiscated in 2011 to build a dam, without compensation or permission, leaving the family with no means of supporting themselves. Cheraghi was also the target of threats and assaults after having a relationship with a divorced woman whose ex-husband was well-connected with the Iranian government.

He fled in fear for his life and arrived by boat on Christmas Island, seeking asylum in December 2012, and was released into the Australian community on a series of bridging visas.

In the following months, Cheraghi decided to convert to Christianity as he developed relationships. Back in his homeland, conversion to Christianity is punishable by death. 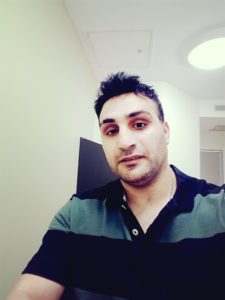 Eddie Cheraghi, used with his permission.

Cheraghi was making a life in Australia. But in July 2015, he was arrested and charged with breaking and entering, assault occasioning bodily harm and stealing. He was granted bail, deemed to be unthreatening to the public because the incident had been confined to a group who knew each other.

These charges led to the cancellation of Cheraghi’s visa, allegedly on the grounds of “an adverse character assessment due to his arrest.” Instead of being able to wait for his day in court, Cheraghi was put in detention.

Despite not being convicted, in the eyes of Australia’s migration laws Cheraghi became an “unlawful non-citizen”. According to the Act, he had to be detained and kept in detention until either deported or granted a visa. But Cheraghi couldn’t be deported – the NSW Director of Public Prosecutions issued a “criminal justice stay certificate,” which prevented the government from removing him until his criminal proceedings ran their course.

Cheraghi was moved back and forth between Villawood Detention Centre and Christmas Island several times, while waiting for his trial. It took three years.

In December 2017, a jury was unable to reach a majority verdict, and a retrial was ordered. He waited another eight months in detention until the second trial was heard recently. Cheraghi was found guilty on some, though not all, of the charges. According to his lawyer, Alison Battisson from Human Rights For All, the maximum jail sentence Cheraghi is facing amounts to less time than the three years he has already spent in detention. He is now in prison, but if released will be detained again.

The United Nations Working Group on Arbitrary Detention has examined Cheraghi’s case and says it is “seriously concerned at the increasing number of cases emanating from Australia” about the mandatory detention of all unlawful non-citizens under the Migration Act.

“In the present case, the Government has not provided any explanation for the continued detention of Mr Cheraghi since October 2015 …” its report read.

“Mr Cheraghi has been denied the right to challenge the continued legality of his detention in breach of article 9 of the [International Covenant on Civil and Political Rights] and that his detention is therefore arbitrary,” the working group said.

It therefore called on the government “to take the necessary steps to remedy the situation of Mr Cheraghi without delay”, noting that “the appropriate remedy would be to release Mr Cheraghi immediately and accord him an enforceable right to compensation and other reparations”.

Cheraghi has not coped well with his almost three years of detention and uncertainty. As a long-term sufferer of various mental health problems, including bipolar disorder and depression, he deteriorated rapidly, self-harming, becoming suicidal, and attempting to end his life several times.

He stopped moving around and began staying in his room, developing deep-vein thrombosis and pulmonary embolism as a result.

Battison says Cheraghi is one of the most vulnerable detainees she’s ever known. She says she’s seen him when he’s so anxious that he’s shaking, and had to stop meetings to just sit quietly with him because “he can’t speak, he’s just so distressed.”

“He’s a walking time bomb – any detention is life-threatening for him.” – Alison Battisson

She also says he has suffered a head injury and two broken hands in detention, requiring surgery. According to her, Cheraghi isn’t receiving proper medical care in detention: “At one point he had some wounds that were so infected they had pus dripping out of them.”

It was Battison who referred Cheraghi’s case to the UN Working Group on Arbitrary Detention, frustrated by a justice system that was keeping her client locked up without a conviction.

Now, she is concerned for Cheraghi’s future. “He’s a walking time bomb – any detention is life-threatening for him.”

Asylum-seeker afraid for his future

Never met a refugee? It’s about time you did