In 2006 I was in Mumbai, at the Taj Mahal Hotel (which two years later would become the focus of an attack by an extremist Islamist group in which at least 167 people were killed), giving a press conference with Adam Gilchrist. He was a World Vision Ambassador and was in Mumbai with the Australian Test cricket team. He had visited his sponsored child that day in a Mumbai slum.

I have never seen such an enormous press pack. Cricket seriously matters in India. But the main purpose was for Adam to explain why, for him, there are even bigger things in life than cricket, and to talk about India’s poor. He turned to me at one point to ask how many Indian children in poverty were sponsored by Australians. I said more than 4,000. He then asked World Vision India’s National Director how many Indian children were sponsored by Indians. Awkwardly, he said it was less than 1,000. Adam was incredulous, saying to the press, ‘I know how much wealth there is in this nation, and I see the poverty everywhere. This is surely not good enough.’ Australians can be blunt!

He added that he was going to speak to Sachin Tendulkar (an Indian cricket god) about why this was so.

He was right to ask the question. Part of the answer lies in the caste system which, while illegal under the Indian constitution, is religiously embedded in people’s thinking. Karma, which is the law of cause and effect, looks at those from a lower caste who work in dirty jobs or as domestic servants and sees the explanation for their present suffering in the wrong choices they made in a past life. While a neat answer to the religious and philosophical challenge of suffering, the karmic picture of social fatedness is a serious block to compassion. It allows the Hindu rich to literally not see the beggar at the door of their mansion.

We all have a picture in our heads of what the world is like and how it works, even if it’s an unconscious one. And this picture will tend to have either a nurturing effect or a withering one on our instincts of compassion toward others.

Albert Einstein, the Nobel Prize-winning physicist, once wrote in a letter to a grieving father: “A human being is part of a whole, called by us the ‘Universe’, a part limited in time and space. He experiences himself, his thoughts and feelings, as something separated from the rest – a kind of optical delusion of his consciousness. This delusion is a kind of prison for us, restricting us to our personal desires and to affection for a few persons nearest us. Our task must be to free ourselves from this prison by widening our circles of compassion to embrace all living creatures and the whole of nature in its beauty.”

For Einstein, my sense of myself as separate from other people and objects is a ‘delusion’ – actually, if we could only realise it, everything and everyone is connected, and learning to feel and act in line with that reality is a moral imperative. Commitment to a picture like this one, whether it comes from a religious or a secular perspective, is necessarily a matter of faith. It cannot be proven.

This is clear too in one of the most influential modes of ethical thinking of our own time: utilitarianism. Not all utilitarian thinkers are atheists, and not all atheists are utilitarians. If, through the eyes of the atheist, the material universe is all there is and evolved human life is a kind of ‘accident’, then right and wrong are essentially human constructions.

One option then could be to look at the natural world and see survival of the fittest and the dominance of the strong over the weak as the way things do and therefore should play out. But utilitarianism holds that, if we as humans experience pleasure as good and suffering as bad, the most ethical choice is the one that will produce the best outcomes for the greatest number of people.

The atheist and utilitarian philosopher Peter Singer is a leading exponent of the effective altruism movement, which is particularly concerned with applying rational measurement to the challenges of global poverty. It asks the question: How can we, individually and collectively, do the most good? Singer’s book The Life You Can Save: Acting Now to End World Poverty sets a simple test: if you saw a child drowning in a pool, would you not plunge in – even if it meant ruining your nice clothes, for example – to save a life? If you would not hesitate to save the child in front of your eyes, why do we not see the life of the child living overseas in poverty and dying of preventable causes the same way? We can easily give out of our abundance to save the lives of others. Why would an ethical response extend only to those who are proximate and not to those who are distant?

Singer has certainly been one to live out his talk, giving away 30 per cent of his income each year to charities like Oxfam. His reasoning banks on that spontaneous instinct we all have to help the person suffering right before our eyes, and then appeals to logic to extrapolate out to include more and more people in the circle of our compassion. Yet he accepts that his ethical notions of the good cannot arise from naturalism of ‘what is’.

A universe that lacks a compassionate God to impose order, meaning, and moral duty, has no purpose. ‘What is’ cannot lead to an ethical ‘ought’ and to values like compassion.

Singer believes that the good exists beyond science and naturalism – that there are objective values that exist outside of subjective feelings, just as mathematics is objective and exists apart from human emotion. Humans have evolved a consciousness and rationality that can choose ethical purposes for themselves, and human agency which opts not to reduce suffering when we have it within our power to do so is a moral failure.

Whether for the effective altruist, the Neoplatonist, the Buddhist or Hindu, or for me as a Christian, the level of our moral commitment to compassion will flow from our understanding of what the world is really like. 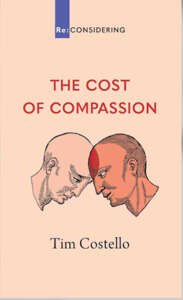 The Cost of Compassion

In Melbourne and its surrounds, aged care is a hot topic at the moment. A…

When I lived in the UK, it rained a lot. That is to say, it…

How much are you shaped by The Pleasures of Pessimism?