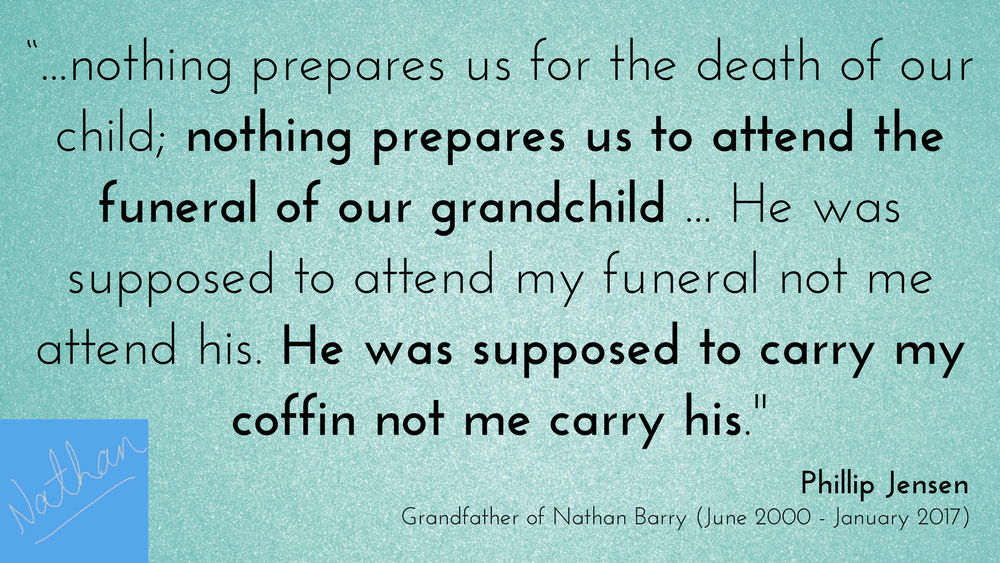 Upon the death of a grandson

When we cease to rage against death, we have given up on life. Death is the horrible reality of our life that screams: “There’s something wrong with the world!” We try to hide that scream; silence it with distractions, pretend it’s not happening with anti-aging creams, and rationalise its existence with meaningless platitudes. We question the sanity of those who want to die but there is no greater madness than thinking we can avoid death.

There is a statistical normality to death that inoculates us against it. Because everybody dies we lose the qualitative horror of death in the quantitative reality of our mortality. Does not the Bible itself tell us that we only have three score years and ten or four score if we are strong. To count our years in ‘scores’ sounds so much better, so much gentler, so much more removed than the harshness of the modern prosaic translations of seventy years or eighty.

We expect old people to die – it is the way of the world. Yet, when it happens, and happens to somebody we love, there’s still grief and sadness; there’s still loss and hollowness. It’s an appalling challenge to our very humanity. As the poet said: “Any man’s death diminishes me”. Some part of our world, some part of our selves, has been removed and there is no scratch that will satisfy the itch of the amputated limb.

It’s the natural order of things to attend the funerals of the generations before us: our grandparents, our parents, our uncles and our aunts. We come to expect that some of our own generation will die before us: our siblings and school friends, our colleagues and neighbours. We even discuss with our spouse which one of us will die first and what we will do without the love of our life.

…no parent of such a child will be ready to bury his or her offspring.

The death of a grandson is not simply natural and normal; it is tragic and horrible. Some children don’t die of natural causes but are killed taking risks while living in dangerous times or places, or following dangerous occupations or hobbies. Still no parent of such a child will be ready to bury his or her offspring. No grandparent will be anything short of heartbroken by the death of their progeny.

God has put eternity in our hearts and we do well to listen to it.

Yet, how can it be ‘natural causes’ when he is only sixteen? How can we call cancer, ‘natural’? How is a tumour in the heart, in any way, shape or form, ‘natural’? Call it obscene, call it horrible, call it ghastly, call it whatever nasty word you like – but it’s not normal, it’s not natural, it’s not good. It’s a sign that the world is not right. It’s something against which we must rage. It’s not simply the dissolution of one temporary organism. It’s the death of person who loved and was loved.

Such a death is one of the trumpet blasts of the Apocalypse, warning us of the judgement to come and encouraging us to look beyond this world for our understanding of life. God has put eternity in our hearts and we do well to listen to it. For in life we, unlike the animals, are constantly making judgements and choices that reflect our values and morality. But it is from the next world that we gain those values and that sense of morality. For though we have eternity in our hearts, which speaks of values and transcendence, we do not know the meaning of life or of death without God’s word.

I prayed that God would take my three score and ten years in place of his less than one score. But it doesn’t work like that.

It is God who has told us that death is the consequence of humanity’s rebellious autonomy. It is because we are the creatures who want to run the world without our Creator, that we are unworthy to live beyond our creation. Yet, God’s plans are not limited to us and this world. He sent his Son to die our death, as our representative and substitute, that we may be forgiven. And he raised Jesus to new life to reign as the Lord of heaven and earth; the ruler and judge of this age and the age to come.

My grandson, Nathan, was as his name indicated, a gift from God. Thirteen months ago, he and I went fishing down at Port Hacking. As I taught him how to spin for tailor, he told me of his hopes and plans for education, girlfriends, his church youth group, school Bible Study and discussed with me whether to be a preacher or a Bible translator. A couple of weeks later the headaches started and he underwent brain surgery. A couple of months later we learnt of the heart tumour and the likelihood of death. I prayed that God would take my three score and ten years in place of his less than one score. But it doesn’t work like that. There is only one who can die for others and he has already done it on the cross two thousand years ago. Nathan knew that and continued to testify to that truth throughout his remaining months. You can hear Nathan telling you himself on this short video that he made from hospital for his school friends some months ago.

…when we cease to rage against death we have given up on life itself.

I know that Nathan is with Jesus in glory for his confidence was not in himself but in his Lord who died for him. Christ had to bear all the horror of our death to bring us eternal life. We may have victory over death in him but we can never accept death as good, normal and acceptable. For when we cease to rage against death we have given up on life itself.

Pray that God would comfort all Nathan’s family and friends as they grieve his death.