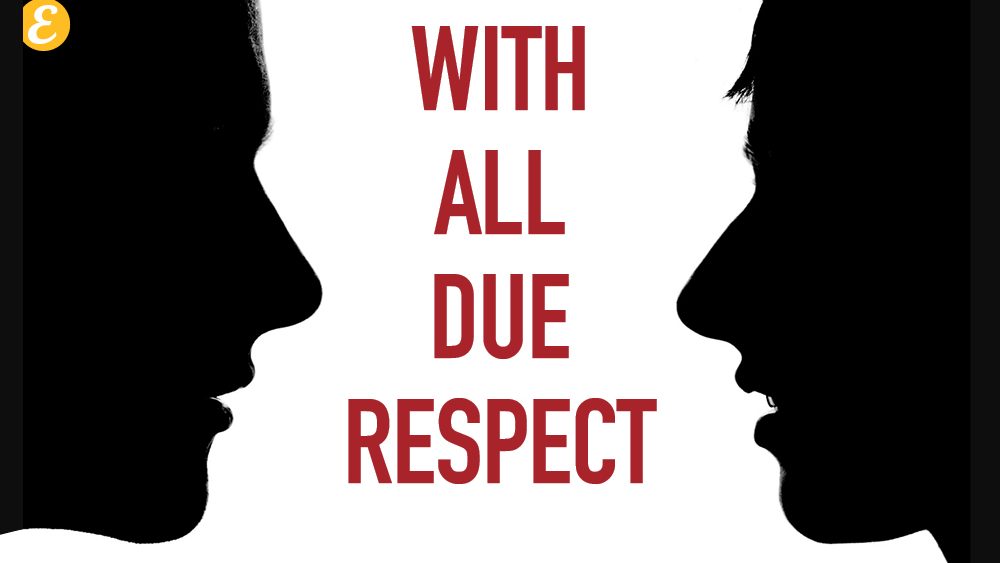 Can you love the church and think it sucks at the same time?

Episode 17 of ‘With All Due Respect’

Can you both love the church and think it sucks at the same time? Well, it’s probably what Jesus thinks, says Michael. So we think yes, it’s possible!

This topic, says Megan, is inspired by the With All Due Respect Facebook group and members (if you’d like to join, click here). In a thread where members introduce themselves, Michael and Megan realised there were a lot of people who’ve been really hurt by the church.

Michael suggests reading Paul’s letters to the Corinthians in the New Testament, where Paul calls the Corinthians ‘saints’ and yet is pretty scathing of some of their behaviour. In the Bible, there is never a perfect church. It’s about the people of God living out their relationship with God as sinners. That doesn’t mean we’re happy with that, but it does tell us there’s a normality about it – tragic as that is.

Megan points to a movement called “Ex-vangelicals“, a reaction against the church mainly in the United States, after evangelicals got tied up in support of Donald Trump. There are also plenty of memoirs about those exploring their faith and ‘coming out’ of conservatism. See Rachel Held Evans and Sarah Bessey, as examples.

Megan and Michael discuss the cultural stereotype that has arisen around the word ‘evangelicals’ and whether a similar movement of ex-vangelicals might be seen in Australia. As an evangelical himself, Michael is not so sure.

The duo also discuss how to respond to those people who have had a bad experience of church in a local community setting versus those who take broader issue with the church as an institution. Michael encourages people to keep up their search for a good church, and not to give up on meeting with other Christians because churches can fail very badly. There can also be great healing in the local church with fellow believers, he says.

And how should we deal with critiques of the church? Megan suggests that members of the church, and leaders in particular, need to be critiquing themselves as well as listening carefully to others. More on that in the Marg and Dave segment this week.

Where credit’s due: talking the influences that form and move us

This is a new segment, where Megan and Michael get to share things that they really like!

Michael get to choose this week: Life Together by Dietrich Bonhoeffer.

Bonhoeffer was writing this book in the 1930s while he was in charge of a small underground seminary that had broken away from the German Christian mainstream movement because of its allegiance to Hitler. The seminary was set up on a farm and he was training pastors there, while trying to find new footing for the church.

Megan’s impression was that Bonhoeffer is writing from a place of disappointment in the church, which makes it quite appropriate for this episode.

There’s plenty in this discussion about what good community as church really means. But also, says Michael, he appreciated what Bonhoeffer says about solitude. While we do need our alone time with God, that’s part of being in community.

Our relationship with God is something we share with each other, says Megan.

Megan suggests asking whether there is someone in their lives who they think, ‘Wow, I’d love to have that person in a Christian community.’ That might be a good place to start. Connect with them first.

It’s cartoon time! Megan and Michael take a look at The Naked Pastor cartoons. Michael is less familiar with them than Megan, who says there is a lot of take up of these cartoons by people who are feeling dissatisfied with church.

The artist was a pastor who has moved out of pastoring and it’s not clear where he stands on Christianity.

“I help people lose their faith without losing their minds,” the artist says.

The cartoons themselves is pretty much all critique, which Megan finds amusing often but Michael isn’t sold.

Here are some of the cartoons talked about in this segment:

WARNING: Questions Will Lead You Astray

Becoming My Most Popular: Women and the Resurrection