Professor Christopher Tyerman, from Herford College at the University of Oxford, has written over eight books on the Crusades, including his magnum opus God’s War: A New History of the Crusades.

For a two-part special on the Crusades, he spoke to John Dickson on Undeceptions, part of the Eternity podcast network.

From 1096 to 1291, the Crusades were a series of religious wars between Christians and Muslims. The First Crusade aimed to secure control of Jerusalem’s holy sites, considered sacred by both groups. 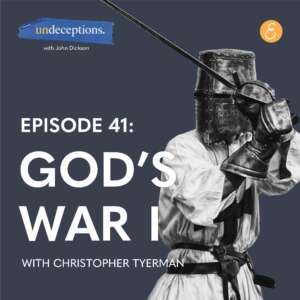 Tyerman told Dickson that much of what passes in public as knowledge of the Crusades is either misleading or false.

“The broadest [myth] is that the Crusades form part of some eternal clash of civilisations,” he said.

“There is a popular perception – in particular, vis-a-vis Christianity and Islam – that the Crusades form part of a contest that goes back to the early days of Islam in the seventh and eighth centuries. And, some say, that contest continues today: look at 9/11, ISIS, etc.

“This is totally unhistorical and corrosive. Yet it is the perception of this contest that informs current emotions and sentiments, on both sides. There’s always this maligned threat to Western values from Islam. And the feeling in the East that foreigners, particularly from the West – from Europe and the United States – are constantly trying to ‘take our land’ under the bogus pretense of their superior values.

“That’s a fundamental misunderstanding. We should locate the Crusades in their own time, their own place and their own causation.” In October 2020, Samuel Paty, a history teacher in the suburbs of Paris, was decapitated. A month earlier, he had shown one of his classes an insulting caricature of the Prophet Muhammad, published in the French magazine Charlie Hebdo. Paty was trying to illustrate the type of free speech – in this case, religious satire – that is protected in France.

A parent took issue with showing the image; in Islam, images of the prophet are strictly forbidden, as is insulting Muhammad. The dispute became public, and a radicalised 18-year-old took tragic revenge.

In response to the attack, French President Emmanuel Macron announced further crackdowns on Muslims thought to have links to radical groups. In one media interview, Macron called Islam a “religion in crisis”.

His comments stoked what was already a simmering feud between France and Muslim-majority countries, particularly Turkey. Insults were thrown between Macron and Turkish President, Recep Tayyip Erdogan. And Erdogan found himself the subject of a Charlie Hebdo caricature the following week.

“They literally want to relaunch the Crusades.” – Recep Tayyip Erdogan

The cartoon mocking President Erdogan sparked fury in Turkey. And Erdogan accused Western countries of launching a ‘Crusade’ against Islam.

The West was “once again headed to a period of barbarity”, he said, describing colonial powers as “murderers” for their record in Africa and the Middle East.

“They literally want to relaunch the Crusades,” he declared.

“Since the Crusades, the seeds of evil and hatred have started falling on these Muslim lands … and that’s when peace was disrupted.”

Almost 20 years earlier, in the aftermath of the September 11, 2001, attacks on the United States, President George W. Bush called his so-called ‘War on Terror’ a ‘Crusade’. He was roundly criticised for this provocative label.

THE two things to remember

Tyerman points to instances like Bush’s declaration as examples of world leaders invoking memories of the original Crusades – 925 years ago – to explain ongoing conflict.

Instead, he says it’s important for us to remember these two things (among many others!) about the Crusades:

Tyerman says the Crusades were different to wars that came before, because they were not just considered a ‘just war’; that is, “a necessary product of a sinful world, where public authorities must sometimes protect through violence”.

Instead, the Crusades were considered “Holy Wars”.

“These are wars fought directly at God’s command,” says Tyerman about what Crusaders believed about the wars they fought. “And the violence itself is a religious act.”

“Thirty years later, for the first Crusade, the killing itself was seen as the penitential act.” – Christopher Tyerman

In 1066, the Normans invaded England under a papal banner. They had relics around their necks. None of the Norman troops after the Battle of Hastings had to do penance for the slaughter, if they could declare that they fought for the ‘just cause’ of ridding England of its sacrilegious perjurer, Harold, the last Anglo-Saxon king of England.

“Thirty years later, for the first Crusade, the killing itself was seen as the penitential act,” says Tyerman. “That was a conceptual change. And it comes about in a particular context.”

In his own book, Bullies and Saints: An honest look at the good and evil of Christian history, John Dickson writes: “Pope Urban II was the instigator of the First Crusade, and whatever his political ambitions, it was his theology that undergirded his thinking.”

“It’s complicated, and too many simplistic explanations of the Crusades exist already, but Urban was essentially looking for a grand moment of repentance and unity for the Church so as to experience the renewing grace of God. He was looking to recover the purity of the church of earliest times. So when Byzantine Christian emperor Alexius I Comnenus begged for assistance from the West to ward off the looming Islamic forces that had captured much of the old Byzantine empire, Urban saw his moment.”

In Urban’s letters from this period (his sermon announcing the First Crusade has been lost), Urban writes: “Whoever for devotion alone, not to gain honour or money, goes to Jerusalem to liberate the Church of God can substitute this journey for all penance.”

Urban wrote of how he “imposed on [the Crusaders] the obligation to undertake such a military enterprise for the remission of all their sins.”

2. The Crusades were a failure

It took the first crusaders three years to get to Jerusalem. Of the approximately 100,000 men who set off, historians estimate that one in 20 didn’t make it to Jerusalem. Some died in battles along the way, others simply gave up and went home.

It took a month-long siege to capture Jerusalem and, to the surprise of almost all involved, the first Crusaders were victorious. But that’s most certainly not the end of the story. There was a second, third, fourth and fifth Crusade, too.

“Popular imaginings about this period sometimes picture an almighty medieval Church terrorising the defenceless Muslims of Turkey, Syria, Palestine, and Egypt, and bringing them into brutal subjugation,” writes John Dickson.

“In fact, apart from the surprising (and brutal) victory of the First Crusade in July 1099, Crusaders were the losers.”

“The truth is: Islamic forces won. Jerusalem, the Dome of the Rock, and the great Al Aqsa Mosque have been in safe Muslim hands — apart from the brief periods … — from the 700s, right through to modern times.”

Tyerman says that in the aftermath of the Crusades, he found ‘triumphalism’ in Islamic texts of the time. “There was the sense of ‘we threw them out’,” he says.

The majority of the Islamic world was not included in the Crusades. It was a “peripheral activity”, says Tyerman. “The great triumph of the Ottoman empire overshadows it.”

Dickson argues that not only were the Crusades ineffectual, their legacy was also equally minimal. “Most major wars in history leave an indelible mark on the winners and the losers. Resources change hands, ideologies are promoted or quashed, and new borders are drawn up.” But not much of this happened at all as an outcome of the Crusades.

“Perhaps the real legacy of the Crusades is as a symbol of the violent ‘Dark Ages’ and the Church’s all-too-human capacity for dogma, hatred and violence towards enemies,” says Dickson.

“Admitting this reality should be instinctive for genuine Christians.”

Listen now to 'God's War I'

As I write this piece, I have two strong, potentially contrary, Christian themes in my…

We’ve collected all of your toughest chestnuts over the past season. Now John Dickson gives them a crack!

For those in biblical academia, it would come as little surprise that there are question…