CBM calls for the funding to match it

Today is International Day of People with Disabilities – a UN-sanctioned day that exists to promote the rights and the capacities of people with disabilities, aimed at galvanizing support towards achieving a more disability-inclusive world. 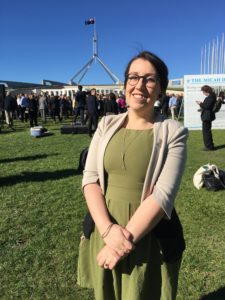 Erin Ryan, from CBM’s Policy and Advocacy team, knows better than most people exactly how capable and strong people facing disability can be – even when they face the additional constraints of poverty.

“Last year, I had the privilege of visiting some of CBM’s Australian aid-funded work in the Indian state of Jharkhand. Jharkhand is beautiful, but incredibly poor, primarily indigenous and deeply troubled by gender-based violence including public lynchings on the basis of witchcraft,” she says.

“There, I met with an incredible group of women living at the intersection of disability discrimination and gender inequality. Many had survived sexual violence, having been raped because they were seen as ‘easy targets’ who couldn’t identify their rapists because of vision impairment, or intellectual disability.”

But with support from the Australian aid program, many of these women with disabilities had accessed information on the justice system and were now fighting in the courts to see justice done.

“These women remind me that people with disabilities aren’t just vulnerable: they’re also agents of change, with many defying expectations to achieve their own goals, and those of their communities.

Ryan explains that people with disabilities living in low- and middle-income countries do face deeper poverty, higher barriers and unique challenges in their daily lives. However, they also have unique strengths and capacities and are making incredible contributions in ending poverty, promoting human rights and fighting climate change.

Ryan says that the Australian Government has long recognised these rights and capacities and has shown leadership in putting disability-inclusive development at the forefront of our aid program.

In fact, Australia became a world leader when the nation’s first dedicated strategy for disability-inclusive development was introduced by Labor Minister Bob McMullan in 2009 and the commitment has continued to receive bipartisan support, enduring changes of government, and being renewed by Foreign Minister Julie Bishop in 2015.

Since then, governments like the UK and Germany have adapted Australia’s strategy for disability-inclusive development in their own aid programs.

Ryan describes this as “a clear case of Australia placing values at the forefront of policy and achieving real impact as a result”. However, she says that whilst these commitments have been unwavering, the strategy hasn’t been adequately supported by funding.

Since 2015, dedicated funding for disability inclusion within the Australian aid budget has been frozen at $12.9 million – with no CPI increases.

In fact, since 2015, dedicated funding for disability inclusion within the Australian aid budget has been frozen at $12.9 million – with no CPI increases. And, whilst people with disabilities make up 20 per cent of the population in low- and middle-income countries, only 0.3 per cent of the aid budget is dedicated to their empowerment, support and advocacy.

Today, on International Day of People with Disabilities, Ryan spent the day at Australia’s Parliament House in Canberra, meeting with MPs and urging them to increase funding dedicated to disability inclusive within the Australian aid budget.

CBM has also launched a petition online supporting the same ask of increasing aid funding, which will be delivered to the Foreign Minister in the new year in the hope that she will take it to the expenditure committee at budget time.

As she met with MPs, Ryan says she carried the story of the women in Jharkhand with her, saying, “I think it really shows that people with disabilities, particularly women and girls with disabilities, can be incredibly vulnerable.”

“More than anything, these are people who have incredible capacities that often aren’t understood.” – Erin Ryan

“They face barriers that are further heightened by their disability and by their gender. But more than anything, these are people who have incredible capacities that often aren’t understood.”

“So it comes back to that core theme of not underestimating them,” Ryan explains.“They’re not easy targets they’re far from it they’re well-educated and they’re prepared to go out and fight for themselves.”

The bewildering and beautiful diversity of disability