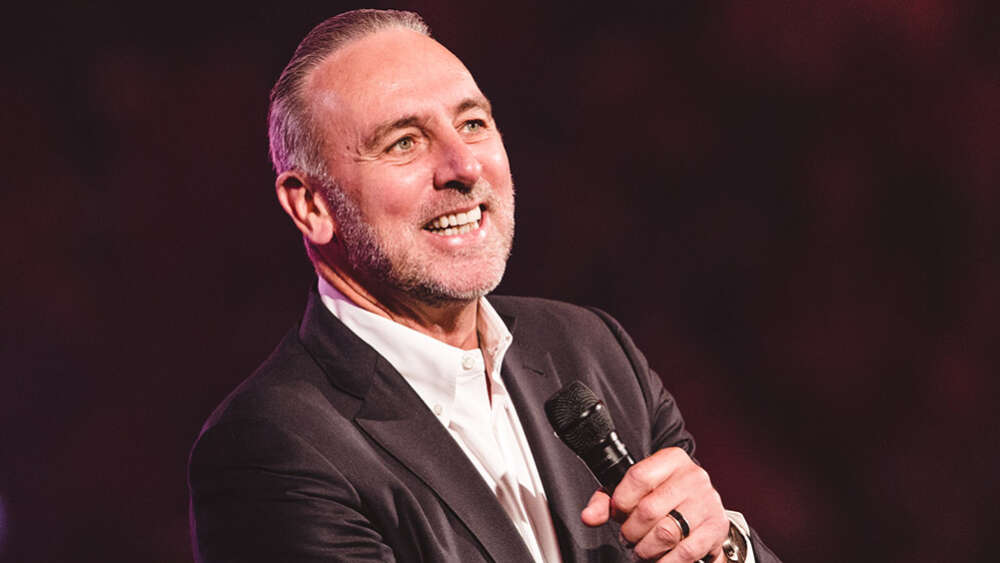 Brian Houston was surprised by the headlines this week which announced he was “pretty well retiring” as Global Senior Pastor of Hillsong.

“This morning in the USA, I noticed that I’m pretty well retiring and Gary Clarke’s becoming the senior pastor!” laughed Houston, referring to a story asserting Clarke was taking on a new role of pastoral oversight for Hillsong Europe/UK.

Houston invited George Aghajanian, General Manager and a director of Hillsong Church, and Hillsong general counsel Tim Whincop to speak about various media reports, including those about Hillsong being sued for $20 million, and staff members having lavish lifestyles financed by tithes. They rejected these stories as “false” and went through details of how Hillsong’s finances are managed, staff are kept accountable, salaries are set by a board sub-committee who are all not on staff, and details are reported annually through Earnst and Young.

Houston then asked Aghajanian: “And is Gary going to be the next senior pastor?” with Aghajanian laughing and replying, “I don’t believe so.”

“Well, I’ve just read it this morning,” Houston replied. Aghajanian laughed again: “Well, if it’s in the press, it must be real.”

Hillsong is no stranger to headlines but Houston spoke about what he sees as an increase in “misinformation” about the church he and wife Bobbie founded in Sydney’s Hills district almost 40 years ago.

“Since our upset in New York in October last year, some of you would know that the media attacks we’ve had have been more intense than any time in our history,” he told the ‘Heart and Soul’ audience.

“Here in Australia we’ve pretty well had interesting relationships with the media for 20 years and so our church is very seasoned in it. But I’ve never seen anything quite like this – just the amount of misinformation,” he said.

Houston explained that getting the words “Hillsong” and “sex” or “scandal” in a headline generated clicks in online media, which translated to advertising dollars.

“Even that article that I’m talking about with Gary Clarke, the reality is the headline was more like ‘Hillsong senior pastor transitioning out during sex scandal,’” he said.

Houston seemingly was pointing to The New York Post story currently titled ‘Hillsong founder Brian Houston distancing from church amid sex scandal’ – a headline that has been changed since it was originally published. The Post has published many articles about Lentz’s dismissal from Hillsong NYC and the “moral failures” which sparked it.

Just as Houston himself reiterated last night, the articles which have flowed from Hillsong’s Vision Sunday announcements this week also did not state that he was retiring.

Christian Today reported Brian and Bobbie Houston saying on Sunday that they are “definitely not retiring”. However, the headline teased out their comments about the next stage of their Hillsong life as ‘stepping back from global leadership’.

What Houston said on Sunday about the next stages includes, as Christian Today also noted: “I guess globally we’ve grown so rapidly and it’s been really a time when what has become clear is we need to put a whole lot more structure into what we’re doing globally.”

“I want to look at ways that we can share that load and over these next couple of years heading up to that church being 40 here,” he said.

With changes mooted to respond to leadership failings, Brian Houston last night asked Hillsong members to remain on guard against media reports and to pray for protection from an “orchestrated attack”.

“I just pray everyone also sees it for what it is and don’t be naïve, and trust the church that you’ve known for a long, long time – rather than believe the nonsense …”

“It’s an orchestrated attack right now and I would encourage our whole church to pray against it.”

Chrishan and Danielle Jeyaratnam, who pastor the Perth and Bali campuses of Hillsong Church, will…

Carl Lentz is one of the most famous ministers on the planet. Leader of Hillsong…

NYC minister tells Hillsong Conference to be ridiculous and radical