Being a passenger on a giant cruise ship forced to head for Italy during the worst of the coronavirus outbreak is something you would not wish to be. Especially with an outbreak of the virus on the ship. But that is where Dr Greta Archbold, a passenger on the Costa Victoria, found herself.

Archbold had to seriously consider the big question: how does a Christian behave on a death-ship?

“I attempted to retrieve my passport, but the staff refused.” – Greta Archbold

Archbold joined the Costa Victoria in Mumbai, India, its home port for 2020. The 1928-passenger ship is part of Costa Cruises, the Italian arm of Carnival, the giant cruise conglomerate.

After leaving Mumbai it soon became clear to Archbold and other passengers that the Costa Victoria was unwelcome. “We were no longer headed for New Mangalore, and Cochin, in India and Male, Maldives. Instead we were at sea for many days,” Archbold recalls.

As the news of the virus onboard the ship spread, “alarm bells were ringing for the passengers and especially me. On day sixteen, March 7, 2020, we arrived at the port of Dubai which was not listed as a destination port for our trip. No other ports before this would accept the ship. Our cruise itinerary was in trouble!”

“As a reaction to all this, I became anxiety ridden. I attempted to retrieve my passport, but the Costa staff refused. Passengers who had completed their trip were off-loaded and hundreds of new passengers were loaded, at a time when all passengers should have been off-loaded and flown to their homeland.

“I felt doomed but in the Lord’s hands.”

It felt to Archbold as if she was running a series of marathons. She had to endure the threat of becoming infected with COVID-19, having other passengers become sick, and multiple passengers consistently being sick with other medical conditions, as well as “other hardships onboard the Costa Victoria.”

However, in the middle of this journey gone terribly wrong, Archbold managed to shine a light. This intrepid traveller started a church service on board.

“These services were amazingly uplifting for those who attended.” – Greta Archbold

It took time, but her aim of having a weekly service was finally accepted. “We were finally given the go ahead but were not to advertise, it was by word of mouth only. We held only two Sunday services because we were in quarantine either onboard the ship or at port. These services were amazingly uplifting for those who attended. Precious readings such as Psalm 23 and 91 gave us strength and protection.”

Passengers were isolated from each other when the virus struck hardest. Instead of church services in the ship’s tiny chapel, it became prayers by phone. A WhatsApp Costa Victoria group was started – “We still use it!” Archbold tells Eternity.

“You’ve got to understand that on the Costa Victoria most people were sick with something,” she says. “Even me, I got stomach issues and acute laryngitis – that’s what it was diagnosed as.

“One bright spot was a doctor on board who happened to be the best gastroenterologist, who had retired from practice in Italy. Contrary to most ship doctors, he wasn’t just a GP, he had extra qualifications.”

Some passengers were allowed to leave the ship in Dubai, but the rest, including the Australians, had to remain on board as the ship headed towards Venice. Their concerns grew with the news that the north of Italy was especially badly hit by coronavirus. While the virus spread on the ship, passengers were told at the last minute they would change direction and cruise towards Rome.  There were issues there also, as Italy did not want them at all.

When bold decisions were finally made and the ship docked in Rome, rather than Venice, Archbold panicked after a couple of days with no sign of the Australians leaving the ship. Meanwhile, the Costa Luminosa, which was docked close by, had definite virus victims.

“We were dumped food at our cabin doors and told to stay in our cabins.” – Greta Archbold

“There was enormous distrust of our captain’s words when he led us to believe we had no cases, as the ship’s doctors could only do temperature checks – and a confirmed case was offloaded in Crete and another in Rome,” says Archbold.

On March 24, Archbold appeared on Sky News Australia with her daughter Tory.  She revealed the mess on board the ship. She declared that “we were treated like ‘pigs’, nothing like the former luxury service. We were dumped food at our cabin doors and told to stay in our cabins.”

The Captain announced over the ship’s sound system to “wash our hands with sanitiser” despite none of the passengers receiving any.

Tory had contacted DFAT, Sky News and Channel 7 in an urgent effort to get her mother and all Australian passenger’s home before there was any greater infection.

Five days later, after “extreme hardship” in their cabins, there was a suspicious phone call to all Australian passengers at 1am, to have their luggage out by 6am – to leave the ship at 8am. Many of them called around to see if this was a prank. The passengers did not know whether to believe it, because they had been mislead by the captain’s announcements.

Archbold phoned her daughter to check, who said not to believe it. But she then called Costa’s English representative to question the call, and was told that, yes, all Australians would leave the ship on March 30. They would fly directly from Rome to Doha, and then on to Perth.

All Australians were temperature checked and were bussed to the airport. The Australian Ambassador came to see them at the airport to tell them they really were going home and not into an Italian hotel, as other ships had previously done – and some lives had been lost.

Archbold’s trials were far from over. First, there was the plane journey home – just before take-off, a fresh group of people boarded from the Costa Luminosa, and some were COVID-19 positive.

Arriving at Perth airport and, later, at the various hotels, all passengers were temperature checked. Some immediately had to leave for a hospital.

Although she had been near a passenger who had tested positive on April 4, Archbold was then tested and found to be negative. Still, her 14 days quarantine turned into 20. At this point, Archbold was also taken to a Perth hospital with a suspected heart attack. This is when she found spiritual guidance, and prayed for herself and others who may have been infected. She found a Bible in the hotel room and practised meditation, and demanded to be served healthy food after the “disastrous pigs’ trough stuff on the ship.”  The hotel was accommodating and took Archbold’s plight seriously. 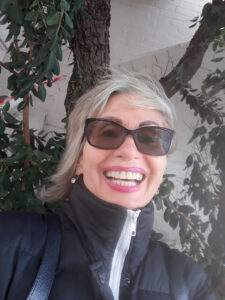 She finally returned to her home city, Sydney, on April 20, overjoyed to be alive and considered a miracle passenger by the WA Health Department.

There were further follow-ups of her health by WA Health, because it was hard to believe that Archbold could have escaped the virus.

“This 48 Day Round the World Trip, by land and sea, was meant to be spectacular,” says Archbold. “[But] it ended lives.

“It [also] created close friendships; it brought Christians together to pray each day together humbly.

“We still struggle and still pray for those left behind … However, the Lord has brought us home, as it would be for me, just in time!”

Back at her home church, St Mark’s Darling Point, Sydney, Archbold read out Genesis 28 during a Zoom Church Group. One verse stood from that chapter stood out to her, verse 15 “I am with you and will watch over you wherever you go, and I will bring you back to this land.” She had to share her experience with the group, graciously accepting God’s will that she was meant to survive.

At this time and as told to Eternity by Archbold, 29 people on the Costa Victoria are known to have became infected with COVID-19, including the captain. All are believed to have survived, but additional cases are still being found regularly through the WhatsApp group.

Pray for all those suffering from Covid-19, especially those who caught it on a ship. Pray for the supporters, friends of those affected. Pray for all who care for Covid-19 patients

Fans in a frenzy as dc Talk does a Nu Thang

Fans in a frenzy as dc Talk does a Nu Thang

“Will there come a time when dc Talk says ‘Let’s just give it another shot’?”…

The Australian Samaritan’s Purse team provides a news update: In the past two weeks, Samaritan’s…

After almost two months in virtual lockdown due to COVID-19, you might think Australians would…

Instead of fearing the rapid development and novelty of new vaccines, we ought to be…

Gathering in prayer for India, in the grip of a COVID-19 disaster

Gathering in prayer for India, in the grip of a COVID-19 disaster

Sydneysiders will gather in prayer this evening at St John’s Anglican Cathedral in Parramatta, west…

Greater love: 72 year old priest gives up his respirator to a younger person and dies

Greater love: 72 year old priest gives up his respirator to a younger person and dies

UPDATE – he was a kind man, had ventilator but could not use it

Police and mob violence, government cover-ups and deliberate discrimination against religious minorities in India are…