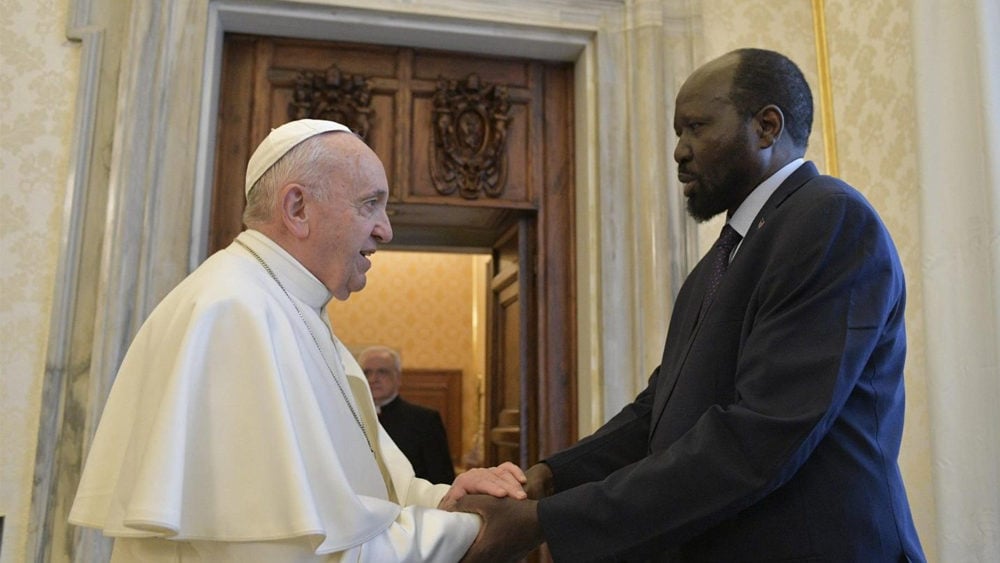 Fresh hope for peace between Christians in a bloodstained South Sudan

Peace just might be breaking out in South Sudan which has been in the throes of a vicious civil war since 2013. About 400,000 people have died and 4 million have been displaced, out of a population of 12m.

The newest nation in the world also has a majority Christian population – which is the reason it broke away from majority Muslim Sudan in 2011. But ethnic violence and political rivalry has turned a nation founded on hope to the unhappiest place on each (according to the UN Happiness Index.) Tribal factions headed by the President and the Vice-President went to war.

“Outside of the main door of the cathedral was a mass grave.” – Jeffrey Driver

Jeffrey Driver, former Anglican Archbishop of Adelaide, experienced the devastation first hand. He explained to Eternity that each of his trips to South Sudan have had confronting moments. “My last trip, in 2016, was no exception. With a group from the Diocese of Adelaide, I came to St Andrew’s Cathedral [in the city of] Bor. I had been there before, preached in that mud-brick and galvanised iron structure that routinely held 2-3000 worshippers in long and sweaty liturgical exuberance. This time was different.”

“Outside of the main door of the cathedral was a mass grave. It held 28 people, men and women. It included two of the clergy.

“In the bloody internal violence that has marked and marred this very young country, Bor was invaded two or three times by the opposing factions, supporting either the President or Vice-President in their struggle for power.

“People had gather in the Cathedral for sanctuary but they were mercilessly shot. Their blood had soaked into the earthen floor, which had to be dug out to a depth of half a metre in order to remove the smell of slaughter.

“Yet South Sudan is a largely Christian country, with the Episcopal Church of South Sudan one of the biggest. That was confronting as well.

“This newly formed nation seemed to be tearing itself apart internally – and while many of those participating called on the name of the Lord Jesus Christ.”

On February 22, a unity government was formed in Juba, the capital of South Sudan,with opposition leaders sworn is as Vice Presidents.

“President Salva Kiir declared the war officially over and asked for forgiveness from his long-time archrival, [Vice-President Riek] Machar, who in turn pledged to work in partnership with Kiir,” the International Crisis Group reports.

The peace deal has been urged on by Christians, headed by Pope Francis and Justin Welby, the Archbishop of Canterbury and symbolic head of the Anglican Communion.

“In April 2019, Francis invited both the South Sudanese president and opposition leader to a retreat at the Vatican, where he kissed their feet in pleading for peace,” Cruxnow reports.

Mauro Garofalo, a Catholic activist who has been hailed as the architect of the accord, says the political will is there to drive the peace process forward. If all goes well, Francis and Welby will make a promised joint visit to South Sudan this year.

Unwinding a gerrymander which favoured the Government’s Dinka tribal link has already happened. Combining the Government and opposition forces into one army will be another big step; International Crisis Group says that Machar was persuaded to come to the capital, Juba, without his security forces.

‘We have had enough … Our leaders have blood on their hands. It cannot continue.’

As a long time observer of South Sudan, Jeffrey Driver has real hope that this peace deal may stick.

“There are a number of reasons that give rise to the hope that this time it may last,” Driver tells Eternity. “There is no doubt that the pressure from the international community has made a difference; in quiet diplomacy that linked peace to financial assistance [and] the more public moments, such as those provided by the visits of the Pope and the Archbishop of Canterbury.

“The pressure of the Sudanese Diaspora has almost certainly made a difference; so many Sudanese in places like Australia have access to education and benefit from civil government which, for all its flaws, is among the best in the world.

“But perhaps the best summary came to me from a bishop who had seen too much; his people die, the living suffer unspeakable trauma, children [are] malnourished because families could not access their gardens.

“‘We have had enough’, he said. ‘Our leaders have blood on their hands. It cannot continue.’

“In the end, a promising young country with resources to nourish all its people had exhausted itself in terrible conflict, first externally, then internally.

“If the cessation of conflict is to turn into the biblical ‘shalom’ peace marked [by] healing and well-being, then this adolescent and wounded nation will need the close friendship of the world community, as well as our prayers.”

Prayer is essential for South Sudan. Pray that the peace deal will hold and that Christians will be able to reconcile with each other.