Sixty-two-year old Dambar Kumal lost everything he owned when the 7.8 magnitude earthquake struck Nepal on April 25, 2015.

Before the earthquake, it had been a day like any other. Dambar was hard at work planting seeds in the fields of Gorkha District, the epicentre of the tremor.

He hurried home to find his house flattened and his entire grain storage ruined by the country’s largest natural disaster in 80 years.

As the second anniversary of the earthquake approaches, Dambar and his family finally have a new earthquake safe house. Before this was funded and constructed by International Nepal Fellowship, they had been living in a temporary bamboo shelter, a cramped space without protection from the elements. 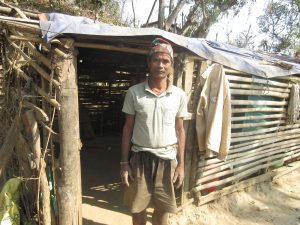 The bamboo shelter Dambar Kumul lived in after his house was destroyed by the 2015 earthquake. International Nepal Fellowship

Almost 9,000 people were killed in the 2015 earthquake. Nearly 22,000 were injured and many more lost their homes and livelihoods. The job of helping Nepal heal remains immense; rebuilding of homes has been slow in many of the affected areas. Ongoing hurdles include access to adequate funds, sluggish government bureaucracy and the geographical challenges of construction in such a mountainous country.

“The majority of people are still living in old houses and temporary shelters since the earthquake,” admits Bishnu Giri.

Bishnu is manager of the GRACE project, the post-earthquake rebuilding project run by International Nepal Fellowship. INF is a Christian mission serving Nepali people through health and development work.

“Two years on, many still feel ongoing insecurity in their homes due to potential flooding or attacks from wild animals. Others have ongoing trauma from having lost loved ones or their homes.”

INF has been working with the people of Nepal since the earthquake struck, helping to rebuild lives through practical construction programmes and capacity building for future natural disasters.

Temporary learning centres are still being used as communities wait for permanent schools to be rebuilt.

Within 24 hours of the earthquake, INF sent a medical team and support workers into Gorkha District, to distribute basic medical supplies and non-perishable food to more than 2,000 households. In the months that followed, INF built 119 Temporary Learning Centres (TLCs) for local children to attend school. These centres are still being used as communities wait for permanent schools to be rebuilt.

INF has formally signed an ongoing agreement with the Nepali government to deliver wide-ranging reconstruction and training to communities affected by the earthquake with a particular focus on people with disabilities.

The GRACE project has engaged the support of local churches.

“This part of the project aims to improve and increase access for people with disabilities to health services, education, work opportunities and meaningful social participation,” says Bishnu Giri.

As the rehabilitation and rebuilding phase gets well underway, Bishnu describes the mixed emotions of the locals. “Many people feel excited that their new houses will be safer, and that new public infrastructure and roads are being built,” he says. “Others feel frustrated by the lengthy process involved in accessing long promised government assistance.”

Alex Barwick lived in Nepal with her family for 12 months in 2014 and worked with INF.