“The incessant killing is more dangerous than coronavirus” These are the words of a community leader in central Nigeria after coronavirus had reached his country – and following an April attack in which nine people died, including a pregnant woman and her three year old.

His reaction is one of several testimonies – frequently harrowing to read, let alone to have experienced – which feature in a British Inquiry into the scale of death and destruction caused by conflict occurring along the Christian-Muslim fault line. It runs across the ‘Middle Belt’ of Nigeria, Africa’s most populous nation.

The Inquiry was published on June 15, by the All Party Parliamentary Group (APPG) for International Freedom of Religion or Belief of the UK Parliament; it has been taking evidence since Autumn, 2018. (However, since the coronavirus pandemic, violence appears to have grown even as international media have been otherwise occupied).

“APPG members have been alarmed by the dramatic and escalating violence in Nigeria characterised as the farmer-herder conflict,” the report states.

“This violence has manifested along ideological lines, as the herders are predominantly ethnic Fulani Muslims and the farmers are predominantly Christians. There has been significant debate about what factors are driving and exacerbating this crisis. Therefore, the APPG launched a parliamentary inquiry to help develop a nuanced understanding of the drivers of violence.”

The resulting report – ‘Nigeria: Unfolding Genocide?’ – points out that the violence has claimed the lives of thousands of people and displaced hundreds of thousands more. It has caused untold human and economic devastation and heightened existing ethno-religious tensions. “The [age-old farmer-herder] conflict has evolved from spontaneous reactions to provocations and, now, to deadlier planned attacks,” explained the International Crisis Group, as quoted in the report.

Despite the scale of the violence, the conflict is much less well-known internationally than the 10-year-long Boko Haram insurgency – which has claimed more than 30,000 lives (112 Chibok girls are still ‘missing’ after six years) – and now its offshoot, Islamic State West African Province’s (ISWAP) atrocities.

These also feature in the APPG report and appear to have escalated in recent weeks and months. In the latest, Boko Haram-linked incidents this month, over a hundred have died and hundreds more been injured. A UN humanitarian hub and a police station were reportedly burned down.

However, this APPG report echoes the Global Terrorist Index (GTI) 2019 by the Institute for Economics and Peace. It indicated that the primary driver of the increase in violence in sub-Saharan Africa, is a rise in activity in Nigeria attributed not to Boko Haram, ISWAP or Ansar ul Islam, but to Fulani militant extremists.

In 2018, it appears Fulani extremists were responsible for the majority of terror-related deaths in Nigeria.

Its geographical footprint is also larger, with conflict manifesting in more states. According to global NGO, Search for Common Ground (SfCG), “between 1 January 2019 and 1 January 2020, inter-communal violence represented the most severe threat to civilian lives in Nigeria.”

In his report for the UK’s Foreign and Commonwealth Office a year ago, the Bishop of Truro concluded “the religious dimension is a significantly exacerbating factor” in clashes between farmers and herders and “targeted violence against Christian communities in the context of worship suggests that religion plays a key part.”

This Inquiry found that Nigerian Christians experience devastating violence, with attacks by armed groups of Islamist Fulani herders resulting in the killing, maiming, dispossession and eviction of thousands.

The Nigerian Government’s attempts to resolve the ethno-religious conflict have been ineffective; there seems to be no end in sight. The long-term consequences of failure to reduce the violence are severe, says the Inquiry: “There is the enormous cost in terms of human lives but there is also the potential for economic collapse, famine, further mass displacement of civilians and even more conflict, as the two major religious groups in the country become increasingly polarised.”

The Inquiry has taken evidence from a wide range of institutions, people and global NGOs, including the Archbishop of Canterbury, the UK government, experts from Oxford University, the BBC, Search for Common Ground, Mercy Corps, the Tony Blair Institute for Global Change, the Institute for Economics and Peace, Open Doors, Christian Solidarity International and many more. Nigerian expertise included a former Deputy Governor of the Nigerian Central Bank, the Muslim Public Affairs Centre Nigeria, the National Christian Elders Forum and the Forum on Farmer and Herder Relations in Nigeria.

This Inquiry found that Nigerian Christians experience devastating violence, with attacks by armed groups of Islamist Fulani herders resulting in the killing, maiming, dispossession and eviction of thousands. The exact death toll is unknown. However, one NGO, Humanitarian Aid Relief Trust – whose founder is Co-Chair of the APPG – quotes reliable reports that more than 1,000 Christians were killed between January-November 2019, in addition to the estimated 6,000 deaths since 2015.

The Inquiry acknowledges that there are multiple difficulties in capturing all available data and then verifying it, including inability to access areas in the aftermath of violence due to security concerns. World Watch Monitor’s former Africa Bureau Chief witnessed to the Inquiry on this from its reports on Nigeria over many years; for instance, often early counts of victims are heavily under-reported by official sources.

These restrictions have been exacerbated by the coronavirus crisis.

The Inquiry report notes that sometimes misinformation and even, occasionally, active disinformation can exacerbate the ability to gather credible reports from both sides of the ethnic-religious divide. The widespread use of social media without checking also contributes to violent incidents.

In February 2019, the US Commission on International Religious Freedom published a report on “Central Nigeria, Overcoming Dangerous Speech and Endemic Religious Divides” which contributed to the US State Department later that same year putting Nigeria on its ‘Special Watch’ List – for having engaged, in or tolerated, severe violations of religious freedom.

As herders travel further distances in search of water and land for grazing, they come into conflict with local farmers, who accuse the herders of encroaching onto their land and damaging their crops.

The APPG Inquiry quotes Mercy Corps’ report that this ethno-religious violence is costing the Nigerian economy £10.5 billion per year (about $AUS18.9 billion).

It also acknowledges that the underlying causes of the herders-farmers conflict are deeply-rooted and complex.

Rapid population growth, climate change and desertification have decreased the water available for land and grazing and put pressure on resources. The UN estimates that “roughly 80 per cent of the Sahel’s farmland is degraded [and] the land available to pastoralists [herders] is shrinking … Declining grain and food production is forcing pastoralists into a desperate search for fertile pasture.”

As herders travel further distances in search of water and land for grazing, they come into conflict with local farmers, who accuse the herders of encroaching onto their land and damaging their crops. Poor management of resources, urban growth, encroachment onto traditional grazing routes used by herders and land grabs by elites increases the pressure on land and resources.

The rise in conflict has strained the capacity of traditional leaders to reduce tensions and resolve conflict amicably. This has contributed to the breakdown of historical dispute settlement mechanisms and conflict turning to violence. The level of this violence has already reached international attention. 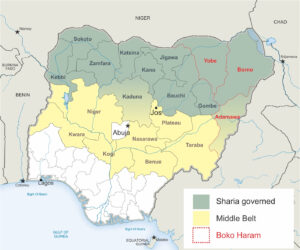 On 26 February 2019, the Economic Community of West African States (ECOWAS) Court of Justice censured the inadequacy of the Nigerian Government’s efforts to protect citizens and investigate acts of violence involving farmers and herders.

The court ordered the government to investigate the killing of about 500 people and the destruction of properties committed by Fulani herders in the Agatu Community in Benue State in 2016. The court stated that the Government “is obliged to protect the human rights of its citizens” and ordered it to identify and prosecute the perpetrators and redress the victims.

The Co-Chair of the APPG, Baroness Cox argues: “While the underlying causes of violence are complex, the asymmetry and escalation of attacks by well-armed Fulani militia upon these predominately Christian communities are stark and must be acknowledged. Such atrocities cannot be attributed just to desertification, climate change or competition for resources, as [the UK] Government have claimed.”

Vice Chair Lord Alton of Liverpool said: “Some local observers have gone so far as to describe the rising attacks as a campaign of ethno-religious cleansing. Armed with sophisticated weaponry, including AK47s and, in at least one case, a rocket launcher and rocket-propelled grenades, the Fulani militia have murdered more men, women and children in 2015, 2016 and 2017 than even Boko Haram, destroying, overrunning and seizing property and land, and displacing tens of thousands of people.”

“This is organised and systematic.”

The APPG’s Inquiry report is dedicated to Leah Sharibu who, at the age of 14, was abducted in 2018 by Islamist extremists from her school in Dapchi, north-east Nigeria.

She was raped and impregnated, giving birth to a child, and has been denied her freedom for refusing to convert to Islam. Her case, while extreme, is symptomatic of the wider treatment of some Christian women and girls in northern Nigeria, to which President Buhari’s government apparently turns a blind eye, even when a State Governor is caught on video coercively converting a young teenager to Islam.

Footnoted version of the APPG Inquiry report is available here:

Rome’s Colosseum was illuminated red over the weekend to remember persecuted Christians across the world.…

The Nigerian Archbishop of Jos, Benjamin Kwashi, may well be the most powerful Anglican leader…