A year on from the Beirut blast that killed 207 people, Josephine Haddad reflects on the crisis her baby boy has been born into in Lebanon and his name, Nathan, which means “gift of God”.

One year ago, in the wake of the August 2020 Beirut blast, I was asked to share my thoughts as an expectant mother witnessing and living through a national trauma. Twelve months on, this trauma feels never-ending; it turns out the explosion was only the start of more suffering for the people and children of Lebanon. Here’s some of what I wrote on the night of August 4, 2020: I am a soon-to-be mum, 39 weeks pregnant and eagerly awaiting the arrival of my baby boy. An expectant mother’s worries in 2020 are more complex than expectant mothers in previous years. Add to that, living in the Middle East, specifically in Lebanon. Bathing a newborn, nurturing him, maintaining a work-life balance in the coming years and everything that comes with childcare were matters that I wished were the only worries on my mind. In Lebanon, we are having a rapid increase in COVID-19 numbers to a point the news was: ‘the fear of hospitals soon becoming stretched’.

Seeing my family and friends calling and checking on each other brought back so many awful memories that we managed to put behind us from the period of explosions and assassinations from a decade ago.

As the media coverage started and things became clearer, I understood the level of destruction. It was not easy to grasp. Every Lebanese household knows a person affected – a missing person, injured, dead, a home destroyed, a business, belongings. It felt like the end of life as all Lebanese people know it. I believe it is – life before the Beirut blast is not the same as after it. Lebanese people manage to overcome all setbacks and all misfortunes, from civil war to the constant instability, but not this. Not this emotional damage.

Watching hospitals in Beirut destroyed, the images of nurses running around carrying newborn babies, frightened and confused mothers who just gave birth – all this got me thinking about my child. What awaits him?  The greatest worry for every mother is the protection of her children, their well-being, their future. At this time, all I am able to think is: will children in Lebanon even have a future? Will my son be safe and protected?? Will he ever experience the change that all children here deserve? 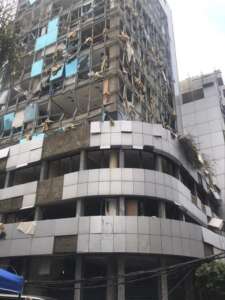 At the time I wrote this, I did not yet know that many mothers had lost their children – some as young as two. One year on, these mothers’ hearts are still just as broken, and their lives have so utterly changed. One year on, a massive explosion is not the greatest threat to Lebanon’s children. The situation in Lebanon got a thousand times worse on all levels: politically, economically, socially – everything.

Thousands of mothers in Lebanon worry about their children more today than they have in recent memory. While we remember the disaster of August 4, Lebanese children today are the victims of an economic collapse that evolved into a humanitarian crisis. Children in Lebanon are currently at risk of food insecurity, increased child labour and early marriage, and of dropping out of school, all as a result of this other man-made disaster.

As World Vision wraps up our programming response to the explosion, I am proud of our organisation’s success in meeting the needs of children and their families. We rehabilitated over 600 houses, schools and common spaces, provided distressed children with psychosocial support, helped 40 microbusinesses start over, and provided cash assistance and food parcels to affected and vulnerable families. We reached half of the hundreds of thousands of people affected by the blast with help over the past year.

We managed that because of the generosity of people in Lebanon and around the world who united in support of the victims and survivors of the blast.

That generosity and support gives us hope – hope that we need right now because those who have endured the distress of the explosion and are now suffering from lack of food, vaccines, medication and basic necessities. And as the crisis continues without any obvious solutions on the horizon, our children’s futures, protection and well-being will keep depending on the generous hearts around the globe.

Josephine Haddad is communications manager with World Vision Lebanon. Eternity has profiled her work caring for Syrian children here. along with the Beirut blast here and here.