A painting of Jesus by Renaissance master Leonardo da Vinci has been sold for $US450,312,500, becoming the most expensive work of art to ever be sold at auction.

All the action was facilitated by Christie’s in New York, before an audience of nearly 1,000 art collectors, dealers, advisors, journalists and onlookers. They had packed into the main auction room at Rockefeller Center, and burst into applause as the historic deal unfolded. The buyer’s identity has not been revealed by Christie’s.

Salvator Mundi (“Saviour of the World”) is one of fewer than 20 paintings by da Vinci. The 66-cm high painting depicts Christ dressed in Renaissance-style robes, with his right hand raised in blessing as his left hand holds a crystal sphere. 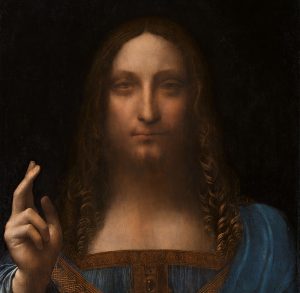 The auction result is a far cry from the price Salvator Mundi fetched in 1958, when sold in a consignment at Sotheby’s for just £45. In 2005, it was discovered in a small regional auction in the United States, ‘heavily veiled with over paints’ having been long been mistaken as a copy. Since then, the painting has gone through a six-year process of authentication that revealed King Charles I of England once owned it. Finally, when it was included in the 2011/2012 US National Gallery’s landmark exhibition of da Vinci’s surviving paintings, it was confirmed as the genuine work of the Great Master’s hand.

The Salvator Mundi auction price dwarfs the previous record set by another Leonardo da Vinci painting called Horse and Rider, a work on paper which sold for $11,481,865 at Christie’s in 2001.

Since Salvator Mundi’s sale was announced, almost 30,000 people have flocked to Christie’s exhibitions to see what has been dubbed the ‘Male Mona Lisa’.

Loic Gouzer, the co-chairman of Post-War and Contemporary Art at Christie’s, describes it as having ‘captivated the imagination of so many people’ – something Christians know Jesus has been in the business of doing for several centuries.