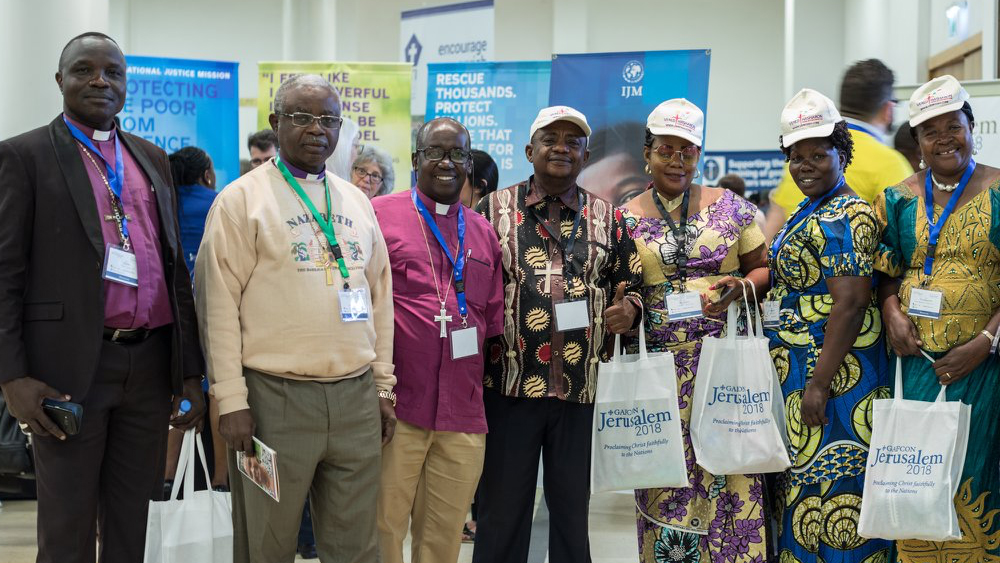 A lot of Anglican ministers are missing from their parishes at the moment – they are in Jerusalem, attending the five-yearly Global Anglican Future Conference (Gafcon), which has attracted 230 delegates from Australia out of almost 2000 delegates from more than 40 countries, including a large contingent from East Africa.

However, one minister is not there. Justin Moffatt of Church Hill Anglican in Sydney gave up his seat at the conference to allow Bishop Denny Guka from Papua New Guinea to attend.

The Dean of St Andrew’s Cathedral in Sydney, Kanishka Raffel, said it was “thrilling” to be among people from every continent and representing every Anglican tradition – Anglo-Catholic, charismatic and evangelical – declaring a common commitment to proclaiming Christ faithfully to the nations.

“There’s a very strong sense of partnership in that common mission and in the confession of a common Lord. It’s thrilling,” he told Eternity from Jerusalem.

Gafcon represents the largest gathering of Anglican leaders for 50 years and owes its existence to a combination of the vision of former Sydney Archbishop Peter Jensen and the leaders of tens of millions of Anglican Christians in Africa.

Gafcon exists to change the Anglican Communion from within following what’s been called a “tear in its fabric,” following the consecration of a gay man Gene Robinson as a bishop in the United States.

Raffel today expressed great disappointment at the lack of action and repentance by the head of the Anglican Church on same-sex marriage.

Though he remained in communion with “Canterbury” – referring to the principal leader of the Church of England, the Archbishop of Canterbury, Justin Welby – he said, “there is a great disappointment in the way that Canterbury has approached this and certainly there is a sense that really nothing has been done, despite assurances to the contrary.”

“The mission of Jesus is too important to just allow these things to slide along.” – Kanishka Raffel

“This is a multinational gathering and there is a very widespread sense that prolonged discussions, agreements, statements, reports, have never resulted in the repentance that we are looking for or even a recognition that there is something to repent of,” he said.

“Ever since then, the communion has lived with this wound and, worse than that, the Americans have been joined by the Canadians, the Scottish church, the Brazilian church this year and the New Zealand church in abandoning the one holy catholic and apostolic church. So, that’s a great grief and Gafcon has always been about calling on those churches to repent of that and to return.

“The mission of Jesus is too important to just allow these things to slide along. You have to be able to give people a true and living hope, which we cannot do if we have a kind of mixed message about something that is very important to most people.”

Welby has prevaricated on the issue of affirming same-sex marriage – despite the 1998 Lambeth statement affirming marriage as the union of a man and a woman – and he appointed a bishop who supports such relationships to his Task Group for Evangelism.

British evangelist Rico Tice, co-author of introductory course Christianity Explored, said at Gafcon that he had resigned from the committee because he couldn’t sit under such leadership.

He issued this warning: “If the Anglican communion won’t [submit to Scripture], the Lord will take his power, his spirit and his gospel outside of the institution and go elsewhere.

“I think the message here, with the vast numbers that are here, is: ‘Listen guys, the Spirit will depart the traditional Anglican church unless we submit to Scripture and repent of our sin and call people to do that.’ It’s a great warning to be heeded.”

Raffel agreed with this viewpoint: “God works through his word and the Spirit brings the word of God on people’s hearts – he brings repentance, he brings faith, he brings obedience, so if you turn your back on Scripture, you shut yourself off from the work of God.”

Addressing what he called “the false gospel of inclusion without repentance”, Nigerian Archbishop Nicholas Okoh said: “If we walk together with those who deny the orthodox faith, in word or deed, we have agreed that orthodoxy is optional.”

He was referring to teaching from officials in the US Episcopal Church and the Anglican Church of Canada.

Okoh, who is chairman of the Gafcon primates (international leaders) council, argued for an Anglicanism centred on mutually held core beliefs rather than historic ties among the international family of churches descended from the missionary activity of the Church of England.

“We do not accept that the office of Canterbury defines Anglicanism,” Okoh declared.

“The gospel is given to us … we must be willing to challenge church leaders who deny the apostolic boundaries of the gospel.”

“You can’t bless and love people and dishonour the Lord Jesus at the same time.” – Kanishka Raffel

Raffel presented a seminar on sexuality with Christian sexologist Patricia Weerakoon at the conference.

“I think addressing that question cross-culturally in this sort of context is obviously fairly sensitive, but we’ve had a very good response. People have been very encouraged by it, particularly helped by Patricia’s expertise and experience,” he said.

“I think a core question is how do we love people facing a range of diverse sexual identity issues. We want to promote an answer to that which blesses people and honours Christ because those two things go together. You can’t bless and love people and dishonour the Lord Jesus at the same time. You can’t honour Christ without loving people and so bringing these things together in a way that is countercultural, in terms of our wider Western culture, is very important.”

He said it had been a “great tonic” hearing how joyfully people were serving the Lord in countries where they face corruption, opposition and poverty.

“They are pressing on in joy and faith and hope and confidence in the power of the risen Lord. It’s really a great privilege to be here.”

The conference will issue a final statement tomorrow.

Dozens of church leaders, including many others affected by flooding and bushfires, have signed on…