Where the new churches will be in 2014

I arrive at the office of City on a Hill, one of the biggest evangelical churches in the heart of Melbourne expecting to find all the usual trappings of a church office: cubicles, ‘office-grey’ carpet, fluoro lighting, a kitchenette with a few stained mugs, perhaps some fake flowers. Instead, I’m met with what looks like a design studio. There are lounges, black walls, wooden floorboards, low-hanging lights and anything but cubicles and carpet. But this post-industrial chic is more than simply a fun office space, it is a deliberate stamp, marking this space out as an extension of the church.

In Sydney, Green Square—the site of a huge urban redevelopment—is set to become a “feeding frenzy” according to one insider…

I speak to Lead Pastor Guy Mason in a crowded café down a Melbourne laneway on his first Monday back at work for 2014. He uses the phrase “our DNA” a number of times to describe what makes City on a Hill distinctive—those things which mark everything they produce. Part of what he’s describing is the church’s deliberate, concerted effort to understand culture, and to not only understand it, but to engage with it aesthetically and apologetically.

Known for their creative output, designer haircuts and largely young, urban members, City on a Hill’s efforts to engage with culture can make it an easy target for criticism. But the fact remains, the church is one of (if not the) the fastest growing evangelical churches in Melbourne, and it’s multiplying. Last year they planted City on a Hill Geelong, this year, City on a Hill West (to be held at Hoyts Cinemas in Maribyrnong), but it won’t stop there.

“Our hope is that City on a Hill West won’t just be a church plant. Like everything we want to do, it’s got to be a church-planting church. So this will be the beginning of churches in the west for City on a Hill,” Guy says.

With each new church, hours are spent researching the people they hope to reach. City on a Hill even employs a research co-ordinator, who comes along to our interview to observe. Guy says while many churches work hard at understanding culture when they start out, few continue to stay ‘on trend’ as they grow.

“I think a lot of churches do [cultural research] in the church planting stage, but a lot miss it later on. So 10 years into a church plant, they look very much like they did when they started and yet the culture around them has change dramatically. 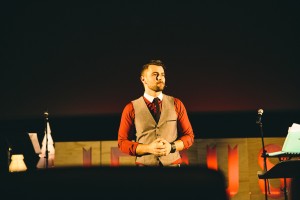 Guy Mason, City on a Hill

Realising they had some knowledge and training to offer young wannabe church planters, City on a Hill last year launched an internship programme (PlantED) for people who’ve been through Bible college to learn from the inside what it’s like to plant a church. And it’s already bearing fruit. Former intern Sam Wright will this year launch a new church in Melbourne’s outer East with the support of City on a Hill. Redemption Church in Ringwood is just one of many independent churches Guy hopes City on a Hill can support financially and logistically in the future.

“At our fifth birthday in October 2012 we released a vision document called City Steps. And one of the goals was to see three City on a Hill churches planted, two independent churches planted and one international church supported over the following three years. We’ve launched one City on a Hill plant; we’re about to launch a second; the third will be announced probably mid next-year and we’ve launched one independent, but we’ve got another one to go.”

Church planting is continuing to prove popular across denominations and locations. While researching for this story Eternity discovered 16 new churches starting around Australia in 2014 under a number of denominational banners through a range of church planting networks.

Perhaps somewhat surprisingly, many are taking place in the same areas. Take for example the west of Melbourne. City on a Hill is not the only church planting in the area. Hillsong recently took over two former Life Christian Church campuses in the west, while Anglican church St Jude’s in Carlton has announced it will be planting in the inner-west suburb of Kensington later this year.

Similarly, in Sydney, Green Square—the site of a huge urban redevelopment—is set to become a “feeding frenzy” according to one insider, with reports of three different church plants cropping up in the area this year.

Guy says it’s not necessarily a bad thing, and the more churches, the more chance of reaching the population.

“There’s always room for more church plants, I think. Not at the expense of existing churches—it’s not an either or. We need more pastors to help handle existing churches, but we also need new churches. We need a combination of both.”

In New South Wales, the C3 network will be launching a new Cronulla campus, while the Acts29 network is planting in Green Square (Anchor Church), Forestville (Mission Church) and Newcastle (Gospel Church). Meanwhile, Sydney Anglicans are also planting a church in Green Square (One1Seven) as well as two in the Redfern area.

In Victoria, there are three new plants cropping up in country areas. Warrugul Presbyterian Church is launching in February, the Christian Reformed Church is planting in Geelong and Seed Community will start in Swan Hill.

The Reformed Church have been planting prolifically over the last eight years, particularly in Tasmania and Western Australia. In the past 20 years one church (Willetton Reformed Church, Perth) has planted four churches, two of which have planted daughter congregations. Clinton Berenden from the CRCA’s church planting taskforce says the denomination believe church planting is biblical and effective.

“I think we see in the Bible that church planting is an outgrowth of the gospel, of evangelism and discipleship. But I think also some of the research that’s been done in the United States reveals that if someone comes to faith, they are six times more likely to have done so in a church that’s less than five years old.”

Perth and WA more broadly seems to be a hotbed of church planting at the moment. Unichurch Curtin (Perth) is launching this year and the Seventh Day Adventists are holding a church planting summit in Perth in February, while Geneva Push will host theirs in Perth in March.

In Tasmania, the Vision 100 network is continuing its work of encouraging church planting in Tasmania, where the reformed churches in particular have been making inroads.

In South Australia, Elizabeth Uniting Church is researching how to plant churches in northern growth corridors, while the Trinity Anglican network is still aiming to plant 20 churches by 2020. In other parts of the country, planting is less prolific, though still happening; the Presbyterians are planting in Southbank in Brisbane (Creek Road), as an example.

At a national level, Acts29 is hosting its first-ever national conference in Melbourne in August, and is bringing out network President Matt Chandler for the event. Geneva will also hold its annual conference, Multiply later in the year.

Looking at the stats, it seems like church planting is here to stay, something Guy Mason welcomes, but not without a word of warning.

“Church planting is a little trendy in the Christian world. It’s like the sexy option. That’s a great thing, we want lots of church planting, but we don’t want people jumping into church planting for their own platform.

“What I do know is that church planting is a freaking hard thing. The guys who don’t make it, or the churches which don’t seem to flourish, the statistics just aren’t great. And often the research says it hinges a lot on the leadership and their preparation for what is to come.

“We can’t just expect church plants to just appear. It begins with training and building a culture that allows that. We have to change the mindset some churches have about other churches planting and yet, all of us are here because of a church plant which happened at some point. We need to do a lot more work in supporting, training, resourcing. I think as we move forward into the decades we’ll develop that material and it will support others.”