It all started in Koorong Street in Marsfield, a small suburban street of sixties brick veneer. Bruce and Olive Bootes arrived in the early seventies when Bruce, a country vet, got a head office job in the Agriculture Department. “It was a big old red brick house and it is still there today,” recalls their son, Paul Bootes, Koorong’s long-serving managing director. “My mum still lives there. She’s 87.

“Dad always loved books and he was a part-time Reformed Baptist preacher. Around 1971 or 1972 Dad started getting books in from a couple of publishers, especially along the ‘modern reformed’ line, Banner of Truth and people like that. It was nothing more than a small church bookstall type of thing. But then a few more friends said ‘get me this’, ‘get me that’. So in the period 1973-74 it became a business rather than a little hobby, I suppose.”

Olive Bootes was the mainstay of the business. It outgrew the garage, taking over the bottom of the house, and then the younger Bootes brothers and sisters found themselves sleeping with books. 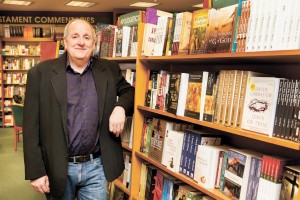 Koorong’s managing director Paul Bootes in one of Koorong’s bookstores.

A couple of suburbs away, in a still-sleepy shopping street, Ryedale Road in West Ryde, the family bought a shop in 1978. By then Paul was an English teacher but trekked back to the family business each night to help out.

He decided to leave teaching and run the business full-time. He’s still there 37 year later.

Paul’s a big bloke, built for rugby league. Rather than the book-laden warren I expected, his office is bare and functional, above a new, larger Koorong shop in West Ryde. “We grew. In the ’80s we opened stores in Melbourne, Brisbane and Perth. Adelaide in the ’90s. At our peak in Australia we had about 19 stores. I enjoyed building the business with God’s help – lots of God’s help.”

So what are Australia’s leading Christian bookseller’s favourite books? “I loved Philip Yancey’s book What’s So Amazing About Grace? That was an incredible book, an absolute classic. A book by Tom Smail, The Forgotten Father, is one of the most amazing books I have read. Another book I really enjoyed and which I have read several times is I Give You Authority by Charles Kraft, who was a professor at Fuller Seminary. That is a bit of an ‘out there’ title but it is a very interesting book. I am eclectic – I read a bunch of different books.”

And what has he read recently?

“I read the Alistair McGrath biography of C.S. Lewis, which I thoroughly enjoyed. I have been reading a lot of The Passion Translation by Brian Simmons. He believes that a lot of Bible translations don’t have the passionate heart of God in them so as a former New Tribes missionary he has translated the Bible.”

All staff at Koorong have to experience what it’s like to sell on the floor. So I ask him what he might sell a young person exploring Christianity.

“I will often start with a Christian biography, someone who has had some amazing experiences. I’d try to sell them a Bible if they did not have one. Then it depends on where they are at. If they are a 15-year-old kid I might sell them Run, Baby, Run or a story like that … If it was someone who is a little bit older I might sell them something like Heart of a Lioness, which came out last year, and is the story of Irene Gleeson, an amazing story of stuff that happened in her life.”

What if it was a Christian who had doubts?

“I’d maybe sell them something like the Doubter’s Guide to the Bible by John Dickson. I think doubt can sometimes be dealt with intellectually, but I personally don’t think that doubt should be a normal Christian thing to have. I’d want to try and get them to a place where they had some sort of existential experience of the Holy Spirit because that’s what I think Paul talks about in Ephesians 3 when he talks about the sealing of the Spirit.

“But of course one size does not fit all. Tim Keller’s book The Reason for God is an excellent book to give someone who is either a seeker or at a point of doubt.”

Koorong’s range has grown over the years, to serve its growing customer base, says Paul.

“In the end, if you are serving the church you are providing the resource the church wants. You ask about theological conviction? I think I have believed and not believed half the books I have sold over the years. And changed my position many times on numbers of subjects. Not that my core faith has changed.

“We like the notion that ideas can fight it out graciously on the shelves; the thrust and parry of how people understand the Bible and Christianity and how that all fits together. The Holy Spirit leads people to inquire and he leads them into truth.”

And then Paul leaves Eternity with a puzzle. He points to the great Baptist preacher Charles Haddon Spurgeon as a person who said he was happy to have books fight on his shelf. Paul challenged us to find the quote. We did.

“I have placed next to Gill in my library Adam Clarke but as I have no desire to have my rest broken by wars among the authors, I have placed Doddridge between them.”

Gill, a Hebrew scholar, was a fierce Calvinist (believing God draws people to him without human effort) who was too fierce even for Spurgeon: “His ultraism is discarded, but his learning is respected.” Spurgeon was able to criticise people of his own theological tribe.

Spurgeon said of Clarke, with whom he disagreed, “Adam Clarke is the great annotator of our Wesleyan friends; and they have no reason to be ashamed of him, for he takes rank among the chief of expositors.” Doddridge, the neutral, whose book he placed in the middle, was a Bible translator – still often skilled at keeping peace among Christians.