Collating against the dying of the light: a review of Clive James 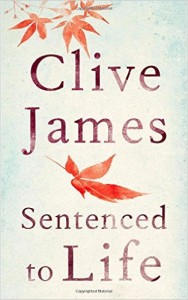 A review of Sentenced to Life by Clive James. (Picador, 2015)

Clive James has a distinctive voice, not just in the sense of his drawling Australian monotone— deadpan but containing a smirk—but also in the sense of the cadence of his sentences and the generosity and authority of his opinions. He delights in the collar-grabbing metaphor and the Chestertonian about-turn, and his sure-footedness with language enables graceful leaps. Now, with his imminent demise due to terminal illness, he seems to be saying his final farewells and tidying up his literary estate so that his voice will be preserved in the manner he desires (a task usually left to surviving family members or editors). Rather than raging, James is collating against the dying of the light.

He is releasing final collections of essays, and Life Sentence is his final (we assume) book of poetry. While criticism has been James’s bread and butter, poetry is his first and last love, though a strict delineation should not be made between the two, as James has always crafted his prose as carefully as poetry. Still, this particular book feels like his valedictory address, and it is crafted accordingly. James’s skill at verse is well-attested to; here he fits nuanced subject matter into tight poetic formats – ABAB rhyme schemes and the like. As with his awe-inspiring essay collections, there is also considerable knowledge on a range of topics: Ballet, war, Apollo missions, movies. He has always had a rapacious appetite for literature (and other cultural forms). Some of it seems like showing off, at other times it is sheer love: his fondness for books includes describing the particular editions he has bought.

The book’s main subject matter, though, is death—James’s own. He compares his life to the driftwood shelters he once built on the beach for his daughters—shelters that were washed away with the high tide. James has always made the most of bringing forth from his overstuffed mind a mix of high and pop culture and here he juxtaposes poetic metaphors with the more mundane reality of his illness—one poem bumps down from the apocalyptic evocation of skeleton riders to the phrase ‘cough up muck’. There is much here about being short of breath, shuffling along and interrupted sleep. Once a great traveller, he muses that it is ‘hard to believe’ he was once free from illness and its accompanying medications. When younger he seemed to have boundless energy for writing; now he tells us he struggles through a few lines.

His is also very publicly dying. He has spoken of his embarrassment at having lingered longer than expected, enabling a kind of extended lauding of his life’s work. The flipside has been the airing of his dirty laundry. While over his career James has avoided scrutiny of his private life, an affair broke that dam wall, and in these poems, which are more personal than any of his previous work including his memoirs, he writes a little about the pain and regret. He writes that a clarity of vision has been ‘restored by my decline’, enabling repentance for being an absent father and husband. He has spent, he says, a lifetime ‘pampering my mind’, but realises that at times books and writing were a convenient excuse for not facing up to moral obligations. He also wonders whether his repentance comes too easily, a thought that might trouble the reader too. It’s hard sometimes to know whether James is being honest, or trying to look honest. Such is the talented wordsmith’s curse.

What brings relief to this is his observation of the little things—afternoon light, spring growth—and his fond recollections of youth. His reminiscences of Sydney sunshine, juxtaposed against the grey of Cambridge skies, recall the tongue-in-cheek anthropocentrism of Auden’s poem about the death of Yeats, which suggests that the weather mirrors our moods. As is the case with many people entering later years, the fleeting business and busyness of middle age fades and the simpler times of childhood come to the fore. With an enforced slow-down comes time to savour what is important. In the face of illness and death, James continues to celebrate the richness of life.

This is partly because James thinks this life is all we have. In his other books James’s atheism has been largely irrelevant, but in this book he takes the opportunity to preach that there is no afterlife: ‘here we live or else nowhere’. He is a terrific critic, and his prose is as beguiling as Delilah, but we don’t have to agree with every sentence. Like his friend Christopher Hitchens, James is blinkered by his brilliance. Religion is one of the few things he is not interested in (despite his translation of Dante’s Divine Comedy), and if he is not interested, he is quick to dismiss. But his dismissals are akin to saying ‘all swans are white’ or ‘there is no life on other planets’. He writes as if there has been some recent, definitive, scientific discovery that has made the God hypothesis redundant.

There is a contrast between James’s language—nothingness, emptiness, nowhere, dark, night—and that of Christians’ emphasis on light and continuity. There is gratitude here, but not much in the way of hope. Christian hope may well be a delusion—Christians don’t have definitive proof either—but we take God’s existence on trust, building on the experience of the first Christians who were animated by more than just inspiration, and who were convinced that God had walked among them in human form. They were also caught up in a movement that subsumed their individuality into a greater good.

In the TV series Moonlighting one character parrots the common wisdom that we are born alone and die alone. Another character suggests, though, that ‘the mother is usually there’ at our birth. Indeed, we do not survive without family and community. James calls himself ‘blessed’ because of his family, but there is also the sense here of his facing death alone. I don’t want to suggest that James is self-centred (after all, we should grant a dying man some license to grumble about his afflictions), but I also can’t help but think there is little sense of a shared journey here. Despite his affirmations of life, and his assertion that he ‘hardly’ laments his fate, sadness permeates this book because of the ephemeral nature of life and fame (on which James has written extensively). While James is finalising his literary reputation, ultimately reputations, like bodies, crumble to dust. These poems point mostly back to James, and to his voice that will soon be silenced. In contrast, Christians, including those Christian poets of times past, point outwards, to a faith and life in community beyond themselves.