Christian educator Nick Jensen has defended his vow that he and his wife will get a divorce if same-sex marriage is legalised, a stance that has puzzled Christia 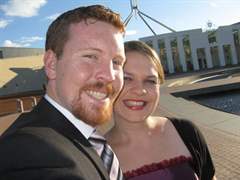 ns and outraged many non-Christians.

Amid accusations from the gay lobby that he made Christians look ridiculous, Mr Jensen denied that his standpoint was a stunt but said it was rather a matter of conscience.

“We would be doing this whether it got the attention or not,” he told Eternity.

Writing in the Canberra City News this week, Mr Jensen said the decision to divorce was not taken lightly but he and his wife Sarah felt they could not “recognise the government’s regulation of marriage if its definition includes same sex couples.”

However, it would not be a traditional divorce as the couple would continue to live together and hopefully have more children.

“Divorce isn’t really the right term because we would still consider ourselves to be married, under God, and under our church, and we would still live together, hopefully for another 50 years and have many more children,” said Mr Jensen, who is Director of the Lachlan Macquarie Internship, formed by the Australian Christian Lobby.

Explaining why the couple were pursuing this course, he said: “When we were married just over 10 years ago in the Tuggeranong Baptist Church in Canberra, we signed a contract with the government that was essentially recognising a shared vision of what marriage was, which is a foundational part of the created order, part of God’s story through human history, male and female, for the purpose of raising children, faithful and for life. And that is what we actually signed with the government as we signed that marriage certificate.

“So as in any legal contract, if the government decides to change the terms of the contract, well, unfortunately, that is something that we can no longer agree with and therefore participate in.”

With the internet in uproar over the couple’s threat, Mr Jensen said “I know there’s a lot of aggression going on out there. I just seem to have hit a nerve.”

However, his threat may be academic as the couple would be unlikely to qualify for a divorce or annulment unless their relationship was broken and they were prepared to separate for a year.

“Now we’re not going to lie – our marriage is wonderful. We certainly have no intention of living apart, but partly why we raised this issue is to help people understand that there are significant consequences in the marriage debate – consequences around existing marriages like our own, and whether Christians and other people continue to get married under the state in the future. There will be consequences for children not being connected to their mother and father, religious freedom and freedom of conscience – all these things have really yet to be discussed. So partially we’re trying to encourage a deeper discussion as well as just making clear there are issues at stake here when you change a fundamental institution.”

Answering a question about what a divorce would mean for his two children, Mr Jensen said there would be no need for a settlement as there was no legal difference between a married couple and a de facto couple under Australian law.

“But it’s a good point and worth considering in detail as we explore this. But hopefully we won’t have to. I think the tide is turning … As we deepen the debate we hope the government will keep what is good for society. Obviously the church needs to wrestle with this and this is part of why we made this go public, but ultimately it is about our individual choice and what it means for our marriage.

“Certainly some people will say some horrible things, but our motivation wasn’t to harm anyone; it’s just that as a couple, according to our conscience, this is a decision that we would have to make if any legislation were changed.”

Neil Foster, Associate Professor, Newcastle Law School in NSW, said the threat to divorce represented a misconceived view of the way the Bible’s view of marriage and the law of the land interacted.

“While the Bible lays down clear parameters that are ideal for marriage, and a fundamental part of it is a man and a woman … the Bible recognises that, if you’ve entered into an arrangement under the law of the place you are in, the Bible would regard you as married.

Associate Professor Foster says the institution of marriage is still worth supporting even if at the edges it does not comply with the biblical law because “it is a good thing that God has provided for human beings … not just for Christians; it’s for everybody.”

While he hopes same sex marriage will not be introduced, and thinks that if it is, in the long term it will be bad for the institution of marriage generally, he does not believe that its introduction would immediately invalidate existing marriages.

“It does not mean that previous marriages that have been celebrated are in some way tarnished or tainted,” he said.