Katanning is a small country town situated about three hours southeast of Perth, and is home to almost 50 different ethnic groups, including a Karen-speaking Baptist church, founded by a group of Karen refugees.

The first Karen refugees arrived in Katanning about seven years ago, seeking work at the local abattoir, which was willing to employ non-English background speakers with no experience. They moved from Perth, after being granted asylum in Australia following many years in refugee camps along the Thai border.

Ten per cent of the population of Katanning is Aboriginal and Torres Strait Islander. A further 20 per cent is of non-European descent. The biggest non-European population is the Karen, who are technically from Burma (Myanmar) but treated as refugees in their own country.

The Burmese government refuses to recognise Karen people as Burmese, and the Karen have been engaged in decades of civil war, which has displaced many. Hundreds of thousands of Karen people have fled their homeland and live in refugee camps along the Thailand-Myanmar border.

Although Myanmar is a Buddhist nation, the Karen people are largely Christian, and although Katanning is in many ways an unlikely setting for a foreign-language church, the tiny town’s Karen church has about 80 people. 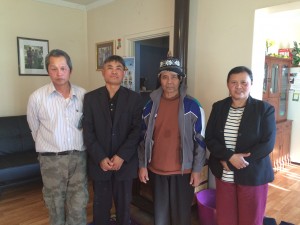 Aunty Jean Phillips became acquainted with the Karen people after several of them came to her Baptist church, soon after settling in the town. As she tells it, “the church asked me to look after them! I’m glad they asked me because they’ve become my family in Katanning.”

At present the Karen use the Baptist church facilities on Sunday afternoons for their service. They sing hymns in Karen, read Scripture and pray. Pastor Jairus Maung says most people access the Bible on their tablet or smartphone. There is always a sermon, and there is Sunday school for the kids. The service will run for about two hours, followed by a meeting to discuss church business.

They also gather in homes on Sunday mornings and Wednesday evenings to praise and worship God.

They came for work at the abattoir, and stayed for the community. Pastor Breena Benny says, “I like being in Katanning. It’s better than Perth. Perth was too busy.”

In a deal brokered by the Baptist Church in Perth, the Karen people have secured a loan in order to purchase a block of land on the outskirts of town, with the long-term aim of building a hall in which to hold their church services. Soe Pwell MooKwa, the secretary of the Karen Church, says, “building will have to wait until we have saved more money!”

Aunty Jean Phillips was awarded the Premier’s Australia Day Active Citizenship Award in 2013 for her many hours spent volunteering with the Karen people in Katanning.

In an interview with the ABC Jean said, “for a long time now I’ve been helping refugee people settle in Katanning. Mainly through enrolling children in school, helping people find homes, filling in paperwork, helping them with their English.

Aunty Jean is a well-loved member of the Karen community, though she has not learnt any Karen. She says, “I get to go to weddings and birthday parties. I get more out of it than I put in.”

But the Karen people are not the only refugees settling in Katanning. The abattoir has drawn people from many nations to the tiny town, which now holds an annual Harmony Day Parade, celebrating the diverse range of nationalities that have settled in the town.

Margaret Renk is also involved in helping people settle into Katanning by teaching English through a state-wide programme called Read Write Now. It’s not a Christian literacy program, but in Katanning all the tutors are Christians. There are 27 students enrolled in the programme.

A few years ago they had a group of Afghan men come to Katanning and enrol in the classes. Today there are people from all across the world learning English with Margaret and the other volunteer tutors in Katanning.

They don’t talk about religion or politics (a course requirement), but Margaret says that she is motivated by her Christian faith to be involved in helping other people learn English.

Margaret says, “I think of all the good things Jesus did on earth; it didn’t matter to him who they were – why should it matter to me?”

Katrina Tait never intended to make headlines. But she was hauled before the the NSW…

Katrina Tait never intended to make headlines. But she was hauled before the the NSW…

7000 people have fled their homes in the past two months

Does your church need a sensory room?

Does your church need a sensory room?

Ep 10: On how to read the Bible, LOTR and, well, all the books really

Ep 10: On how to read the Bible, LOTR and, well, all the books really

Trying to help a nation plagued by civil war, famine and official opposition