A map of our age: Review of How (not) to be Secular 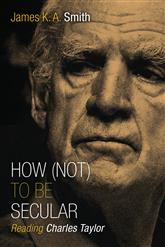 A review of How (Not) to be Secular: Reading Charles Taylor by James K. A. Smith. Published by Eerdmans.

The experience of reading James K. A. Smith’s new book is like an adopted person meeting their biological parents for the first time. I lost count of the number of times I said to myself (occasionally audibly), ‘So that’s why I’m like that.’

Smith’s How (Not) to be Secular is a map to a map. Subtitled “Reading Charles Taylor”, the larger map in question is Taylor’s monumental work A Secular Age in which the Canadian philosopher (actually, both Smith and Taylor are Canadian philosophers, but I am talking now about Taylor) charts, with enormous scholarship and profound originality, the path by which our age became ‘secular’. For Smith, the insights Taylor provides are so urgent and prescient, and the risk of Christians misdiagnosing our age so prevalent that they could not afford to remain locked up in Taylor’s intimidatingly large, learned volume. Smith’s (not inconsiderable) gift to the church is to make Taylor’s insights available to a wider readership.

Smith’s book works more or less chronologically through Taylor’s, distilling and meditating on the larger volume. According to Smith, Taylor’s argument is best accessed as a story and Smith pays homage to that by maintaining a story-like movement within his work. It is more like an overture compared to an Opera rather than like Cliff’s Notes to a desperate year 12 student trying to understand King Lear.

Why was it virtually impossible not to believe in God in, say, 1500 in our Western society, while in 2000 many of us find this not only easy, but even inescapable?

It is, in one sense, about non-belief in God. But it is not simply an apologetic about why people don’t and why they should, but rather how the conditions changed to make that situation possible. It’s not even, in the end, about atheists (still a tiny minority of the population) but rather about a world in which faith is endlessly contestable. It is a book that seeks to take us (to use a computing metaphor) from the interface to the operating system of our age. It is an invitation to consider, not just the expressions of belief and disbelief, but the (often unspoken) substructures that shape what is and is not on the table as contestable.

There are dozens of insights here that would alone justify the cost of admission. Smith explains, for example, Taylor’s idea that the post-1960s was an Age of Authenticity, shaped by a privileging of ‘what speaks to me’. It is a time that promotes Expressive Individualism in which each of us is called on to live out our identity in our own way, favouring that which makes us ‘unique’. On the way, religion (including protestant Christianity) has gone through a process of excarnation—a process in which a ‘religion’ becomes a ‘belief system’—disembodied and de-ritualized.

The many insights are undergirded by what for me is the One Big Insight that is at the heart of Smith’s/Taylor’s work: namely, the contingency of our secular age. To read Smith’s book is to have the surprisingly therapeutic experience of coming to see the kind of taken-for-grantedness of our age as anything but something that should be taken for granted. For Smith/Taylor, the modern secular world is not just what you get when you subtract religion and superstition from the scene. They show instead that our world is shaped by particular commitments, judgements, intuitions and historical contingencies.

Put less densely, there is a story to tell about how ours became a secular age. It could have been otherwise. When we understand that, the effect is to make the dominant narrative of our age, the sort of ‘of course it has to be like this’ story itself contestable. Which, as I said, is strangely therapeutic.

Claims that this book makes Taylor accessible has more, I think, to do with its size than its density. I am reading it now for a second time and working through it with a reading group and it continues to replay that sort of labour. In short, don’t imagine this is “Taylor for Dummies”.

I am not reading Taylor’s Secular Age itself, so I am not yet in a position to comment of how persuasive Smith’s account of Taylor is. But, so far, so good.

And something I’ve wondered about is, if the secular age is an age that has lost a sense of transcendence, how many people actually mourn its passing? David Foster Wallace felt it deeply. Does E. L. James or Dan Brown? It might shape the consciousness of some people in Newtown or Fitzroy; does it reach, in any meaningful way, to the vast suburbia in which most Australians live and move and have their being? Smith says, secular people

have constructed webs of meaning that provide almost all the significance they need in their lives (though a lot hinges on that ‘almost’)’.

How big is that ‘almost’? It would be ham-fisted to read this book and arrive for mission in a suburb with a product called ‘transcendence’, assuming that people will recognise it as something they want. Perhaps (to use another of the book’s brilliant phrases) our buffered selves are buffered from the experience of transcendence almost completely? (On the other hand, arriving in suburbia with the knowledge that people live in a highly contestable story about why things are as they are could prove a powerful ally in mission.)

Finally, for me, the most profound (if also most profoundly unsettling) gift this book offers is self-disclosure. It is not a book about ‘them’ without at the same time and in the same way being a book about ‘us’. That is, Christians. For me, I felt so often that it was my own way of thinking and being that was being revealed, as much if not more than that of my secular neighbour. We may hold to the same scriptures and creeds as a Christian did in the 400s or 1400s, but the way we believe them and the things we fret over are profoundly different. Things that I might take as self-evidently derived from the gospel may in many instances be the products of historical and cultural forces—which is not necessarily to judge them, but it is always good to call things by their proper name.

They need it now more than ever

A forever single man: "My church family taught me about family"

A forever single man: "My church family taught me about family"

When I first started this blog* about a year ago, one of my main goals…

'The Voice' audition that brings Guy Sebastian to tears

'The Voice' audition that brings Guy Sebastian to tears