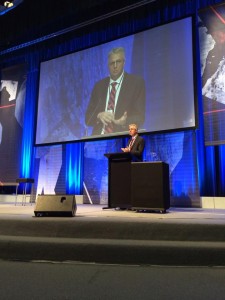 Managing Director of the ABC, Mark Scott has warned Christians they need to be careful not to live in a Christian “echo chamber” and says they should  “get over” regular public criticism of Christianity.

“Get over it, really. Christians are outsiders. That is the fate of outsiders in communities,” he told the crowd at the Re:Thinking conference in Sydney this week when asked how Christians should respond to public attacks on the faith.

Scott said Christians need to embrace being on the outside, and model their behaviour in the public sphere on Jesus and the early church.

Pointing to the massive global market for Christian music, blogs and media, Scott—himself a Christian—also warned of the dangers of retreating into a Christian bubble.

“What we’re really seeing is the rise of the echo chamber, where you select the media experiences that reinforce your worldview and your experience,” he said.

He argued that since the rise of on-demand media catering to niche markets, people are less exposed to ideas different from their own, and can easily fall into the trap of only listening to voices which affirm their pre-existing views.

“And of course that environment will continue to reinforce the correctness of your worldview, but also over-emphasise the popularity of that view and does nothing to help you understand or engage with people outside that worldview.”

Scott called on Christians to consume media which challenged their views, helped them understand culture and engage with society.

“Do you really think that anybody from outside that ghetto or that echo chamber is going to find that in the least bit engaging? I just think it’s a trap.

“Are we going to retreat into the echo chambers that we’ve comfortably created for us? Or are we going to be people who actively understand and engage with the world in which we live?”

The only Bible on the Moon