It’s 10 years since Mel Gibson’s The Passion of the Christ was released in cinemas around the world. Here, Eternity writer Sophie Timothy tells how it changed her life.

The Summer of 2004 was a big one. 18 and fresh out of school, life was music and music was life. When I wasn’t taking moody black and white photos with my new digital camera, I was selling CDs at a music store in the city and volunteering as a reviewer and interviewer for a local music website. Soon I would start studying journalism at university so I could get a ‘real job’ as a paid music writer.

I was about as far from Christian as you could get. Somehow though, in March I found myself in a darkened cinema watching Jim Caviezel playing Jesus in Mel Gibson’s The Passion of the Christ.

Ten years on from the release of Passion of the Christ, it’s obvious I was struck by something electrifying, bright and dangerous while watching that film.

It was the editor of the music website I was writing for who’d invited me—he was a Christian and we’d been talking about spiritual stuff for months (mostly me attacking him, if I remember rightly). But when I received his email invitation to see the film I remember thinking, ‘sure, why not’? 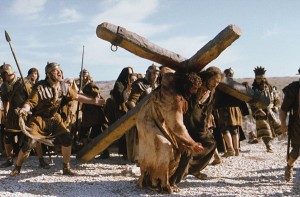 Recalling that day now, most of what I remember is the violence; Jesus whipped with metal fragments, a crown of thorns pushed into his brow, blood dripping and smearing everywhere.

I remember the sick feeling in my stomach, the wooziness, the turning of my face, how I couldn’t watch as the nails were driven in to his hands and feet. I also remember the strange androgynous demon, the cowardly Peter and suicidal Judas. I remember the beauty and the horror.

But above all that, I remember being speechless.

Not one to lose my words, there was an alien feeling inside of me as we emerged from the cinema and I couldn’t speak. Something had shifted in me but I didn’t know what. I remained speechless for half an hour trying to digest what I’d just seen.

Afterwards, my editor and his friends went out for lunch in Sydney’s Italian quarter. I can even remember the restaurant. As we sat there, his Christian friends began dissecting the movie: where had Mel Gibson found the idea of Satan being in the garden of Gethsemane? How had the movie been influenced by his Catholicism? Did you notice how the curtain tore in two at the end?

I didn’t understand. I didn’t have the categories they were using, I didn’t have any words at my disposal other than, ‘that was full-on’.

Legend has it that while filming parts of The Passion of the Christ in a remote location outside of Rome, the actor who played Jesus was struck by lightning. Ten years on from its release on Ash Wednesday in 2004 it’s obvious I too was struck by something electrifying, bright and dangerous while watching that film.

A few weeks after seeing The Passion of the Christ, the people I’d seen it with invited me to a course called ‘Introducing God’. At first, I went out of social obligation, but found myself strangely drawn to the words in the Bible like it was a new song, more glorious than any I’d heard before.

Not long before Easter, on Sunday the 4th of April 2004, those same friends invited me to church. The minister was unpacking a section of Mark’s gospel and linking it to The Passion of the Christ. Towards the end of the sermon, he invited people to pray to God and ask for his forgiveness. I bowed my head, not really knowing what I was doing. Following church protocol I ticked a box on a welcome card, I drank some tea and had a biscuit, chatting to people.

Half an hour later one of my new friends ran up to me saying ‘You’ve become a Christian!’. Their excitement was overwhelming. I didn’t get it—all I’d done was prayed a prayer—but apparently something big had happened.

Over the next few months, I began to understand more fully the impact of my rejection of God, my need for Jesus’ work on the cross, the hope of his resurrection and his plan for all creation. And, like all new Christians, I became zealous for this God who had welcomed me home.

Today is the 4th of April 2014; 10 years since that day I naively prayed that needy prayer. A couple of nights ago I watched The Passion of the Christ for the third time since first year uni. It took me a long time to watch it again because it had traumatised me so much the first time, and I was worried it wouldn’t have the same impact, that it would lose its power somehow. And, in a way, it has.

As I watched it this time, the theological framework that’s built up around my simple faith went into full-gear, analysing every word, every depiction of the old Gospel story.  This time around the violence seemed gratuitous, the emphasis on Mary stood out, the liberties Mel Gibson had taken with the text were all too obvious and it was hard to focus on the main thing: this Jesus, he took on this pain and suffering for us.

It was hard to watch it with the same awe and wonder of an 18-year-old seeing Jesus for who he is for the first time.

I think about the progression of my faith from that fresh excitement and enthusiasm to the more quiet trust of today. And I hear Jesus asking me what he asked Simon Peter as they ate breakfast on the beach after his resurrection in John 21.