Michael Jensen on being alone

Is aloneness part of the Christian life?

The Puritan Daniel Defoe’s 1719 novel Robinson Crusoe narrates the story of a truly lonely human being. Stranded on a tropical island, with none but his own thoughts for company, his solitude is at first a torture to him, and he verges on madness and depression.

As he recovers, he sits and contemplates his situation. If God was the maker and ruler of all things, then “Why has God done this to me?”

But then his conscience speaks up, almost like a conversation partner, “like a voice”: what about his own wayward life? Taking up his Bible (and some tobacco!), he then finds himself falling to his knees: “I did what I never had done in all my life, I kneeled down and prayed to God.” 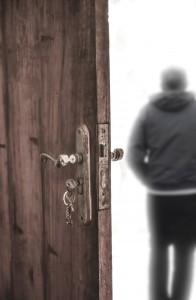 Robinson Crusoe’s solitary existence proves to be a blessing to him. His loneliness becomes a solitude through which he is given the opportunity to reflect on his spiritual condition. He comes to know God because he is removed from the hubbub of ordinary life, with its constant distractions and intrusions. His stillness then enables him to enjoy true Christian fellowship when he discovers his companion, the converted cannibal Friday.

Defoe would write later: “the business is to get a retired soul” – by which he meant that the Christian ought to aim to find an inner isolation in which to cultivate an openness to the voice of God in Scripture and to pray. But Robinson Crusoe was not intended to encourage Christians to isolate themselves in a physical sense, as many early Christians did. For Defoe, the idea of a hermit like existence in a mountain cave or in a monkish cell was a denial of the Christian’s duty to others, and a misunderstanding of the purpose of Christian solitude. If anything, the purpose of seeking isolation was for the purpose of better serving in the midst of the whirl of everyday life.

We struggle to find a command in Scripture for Christians to seek solitude. Much spiritual writing which encourages solitude as a vital component of the Christian life flirts with a terrible legalism. It also promotes the establishment of a spiritual elite, which has the time and the resources and the immense self-discipline for a largely solitary existence. Defoe is right: a truly spiritual life is not properly enriched by simply removing the body from the difficulties of the world.

However, the very shape of the Christian life encourages us to seek an inwardness that solitude certainly helps. Solitude does not make a Christian; but a Christian tends to seek solitude, since to be Christian is to be one who listens to the Word of God. As Martin Luther wrote: “the ears alone are the organ of a Christian”. And the practice of listening to the life-giving and nourishing Word of God takes an effort to still all distractions and complications of ordinary life.

That is what faith is, after all – not simply hearing but listening to the Word of God, and then accepting it as true. This may be marked outwardly, by baptism for example, but believing is an activity of the inner person. And it will involve study of the Scriptures, so that the individual can be confronted by the Word of God which judges and changes a person from the inside.

To pray is also an activity that promotes an inwardness. In the Sermon on the Mount, Jesus encouraged the practice of private prayer: “…whenever you pray, go into your room and shut the door and pray to your Father who is in secret; and your Father who sees in secret will reward you” (Matt 6:6). This is a contrast to the self-promoting publicness of pagan prayer. What Jesus allows us to understand here is that the Father “sees in secret”: which is to say that Father knows us not only outwardly, but inwardly. Unsurprisingly, Jesus himself sought opportunities to pray in solitude.

Indeed, this is one of the great themes of the Sermon on the Mount. It means that God knows us in private as well as in public. He sees our intentions as well as our actions. He knows our motivations and our longings. This is a perspective that means that true prayer can only be honest, since God sees into our hearts. He is not bluffed by our rhetoric, nor by our piety.

And since repenting of sin is so deeply woven into the Christian life, this privateness is again something we will find ourselves seeking, so as to make an honest account of ourselves to the God of mercy. We cannot be honest with God about our sins if we cannot ever find time and space to examine ourselves and to speak to him about them.

It is true that not every human culture has understood the individual as Western Europeans have. In many other cultures, the individual is more like a cog in a system. This inwardness – the way we are used to speaking to or about this thing called “the self” – is not prized, or even recognised, in every culture.

But if Western civilisation was more interested in the establishment of “the self” than in other civilisations we are probably right to see this a result of Christianity’s influence. The development of the science of psychology, which tries to understand and rehabilitate the self, and the rise of that most inward of literary forms, the novel, with its inner conversations, are both heavily indebted to the charting of the territory of the soul that followed the Reformation. For Puritans like Defoe and John Bunyan (the author of Pilgrim’s Progress) detailed self-analysis was what the Christian life simply seemed to demand: not as an indulgent exercise in self-obsession, but as part of bringing the self under the mastery of Christ. It is actually necessary for the individual to find this inwardness, this quietude, that he or she may be prepared for Christian fellowship.

This was one of Dietrich Bonhoeffer’s themes in his remarkable and much-loved book Life Together. Like his other early work Discipleship, Bonhoeffer would later say that he was much too intense in his vision of the Christian life in ways that are not always conducive to understanding grace. But he wrote profoundly of the role that solitude plays in the Christian life: “if you refuse to be alone you are rejecting Christ’s call to you, and you can have no part in the community of those who are called.” By this he means that the Christian cannot simply outsource the Christian life, with its dying to self and rising to new life, to someone else.

But Bonhoeffer – who would spend so many of his final months of life on his own in prison – would also say: “Let him who is not in community beware of being alone.” Christian solitude is nev
er alone, since the Christian life is always a matter of sharing and bearing with others. As Bonhoeffer went on: “if you scorn the fellowship of the brethren, you reject the call of Jesus Christ, and thus your solitude can only be hurtful to you.”

The burning question for contemporary Christians then has to be: how can I find the solitude I need to live the Christian life in the midst of all the frantic activity of modern life, with its chirping phones and blinking screens, with our constant craving for connectedness, and with our need to fill every waking hour with activity and sound? Or what about the parent of a young child, who has no time to herself at all, and is frankly just happy to make it through the day?

The answer is not to be found in a set of bullet points, or tips. It lies rather in our fellowship with one another, as we recognise that the shape of the Christian life asks for silence as well as speaking, time apart as well as time together, and space to speak to the God who is in secret. This could be your gift to another Christian – to enable them to find quiet, so that they can really engage with God, and thus be equipped and empowered to serve the saints.

And the answer lies in grasping how rich is the treasure in store for us when we seek to know our Father in heaven. What we are enabled to discover in our solitude is the astounding love of God for us which is in Christ Jesus – a love which then overflows to the community of believers. If a fruit of our solitude is to know the love of God more richly, then why would we not pursue it, for the sake of the people God has given us to love?