An inner Sydney former Baptist church building has been transformed into a theatre and renamed Eternity Playhouse in honour of Arthur Stace, known as the ‘Eternity man’ for scrawling the word ‘Eternity’ on pavements around Sydney in from 1932 to the mid 1960s. 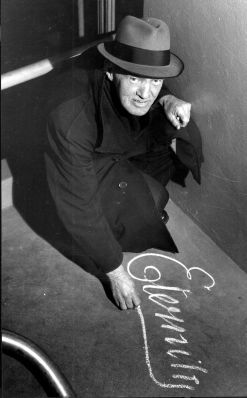 The Burton Street Baptist Tabernacle in Darlinghurst, New South Wales, once one of Sydney’s largest Baptist churches, operating as a church from 1887 until 1996, was purchased by the City of Sydney in 2004, with plans for restoration. The building will reopen in April 2013 as a 200-seat theatre and creative arts centre.

In 1932, Arthur Stace, a converted alcoholic, was inspired by the preaching of John Ridley at the Burton Street Tabernacle on Isaiah 57:15: “For thus saith the high and lofty One that inhabiteth Eternity, whose name is Holy; I dwell in the high and holy place, with him also that is of a contrite and humble spirit, to revive the spirit of the humble, and to revive the heart of the contrite ones.”

In an announcement about the new theatre, the City of Sydney acknowledged the Christian history captured in the building.

“The story of Arthur Stace chalking “eternity” in Sydney streets is well loved, and the image of his script is iconic. It was hugely popular when used on the Harbour Bridge for the New Year’s Eve celebrations in 1999.”

“Replicating the script in signs for the new theatre will look stunning and mark the building’s adaptive reuse as a state-of-the-art theatre and new cultural destination for Sydney.”

The use of the ‘Eternity’ script (as is also used by this publication), is where the Christian link ends. The message of Stace’s radical, life-changing faith has been overtaken by a city who sees his scrawlings as “incredibly Sydney”, symbolizing “the madness, mystery and magic of the city”, rather than the love, and uncontrollable desire, to write a word that would make people ponder life and meaning.

Stace told The Daily Telegraph in 1965 that the word ‘eternity’ was “ringing through my brain as I left [the Burton Street Tabernacle]. Suddenly I began crying and I felt a powerful call from the Lord to write ‘Eternity’…I’ve been writing it at least 50 times a day ever since, and that’s 30 years ago … I think Eternity gets the message across, makes people stop and think.”

Stop to think about what? The City of Sydney has adopted Stace as a somewhat quirky city symbol. Work from the new Eternity Playhouse’s resident company, The Darlinghurst Theatre Company, will no doubt raise questions – the company is well known for its provocative and thought-provoking theatre. But John Brew, President of the Association of Baptist Churches in NSW & ACT says the new name for the building will ensure what the Burton Street Baptist Tabernacle stood for will live on.

“I remember Arthur, and watched him write the word ‘Eternity’ many times,” says Brew.

“I think it’s important that we as Christians continue to focus the community on the defence of Eternity, and the things of God. It’s always a shame to see churches like Burton Street close down, but it’s wonderful when what they stood for lives on.”

Brew says the City of Sydney Council sought the views of the Baptist Church on names for the new playhouse.

“We thank the city council for being sympathetic to the past history of the building and the church there.”