“No better way to start your day than to pray,” says Perth basketball head

At around 5.30am on any given morning, you will find Nick Marvin, managing director of the basketball teams the Perth Wildcats and Perth Lynx, together with his wife and six children at church.

“I think it’s important to start the day acknowledging the fact that we have been gifted another opportunity to live our lives and practice our faith and share our faith,” says Marvin. “I think there’s no better way to start your day than to pray.”

Getting to church, especially at 5.30am every day, is no small task for Marvin, who has six children aged between 16 and one.

“But once you get into a routine it’s the easiest thing to fit into your life, to fit God in first. It’s one thing that we as a family are committed to doing, and it’s now a part of our daily lives, so it’s very easy, and there’s never a question about it.

“And quite often, especially if you have a challenging day, it’s fairly useful and helpful from a spiritual and non-spiritual perspective, to pray for the people you’re going to spend time with, or pray for someone you met, or someone who’s going through a tough time,” says Marvin. “I think when you pray for people, when you meet them, your relationship with them is going to be far different and better than if it’s just a secular, materialistic, non-spiritual way of dealing with people in your life.”

“But once you get into a routine it’s the easiest thing to fit into your life, to fit God in first.”

Marvin was born into an Indian Catholic family and was raised in his native India until he was 17 years old, when his family moved to Melbourne. He says that his faith was a great structure and support as he dealt with the cultural change. 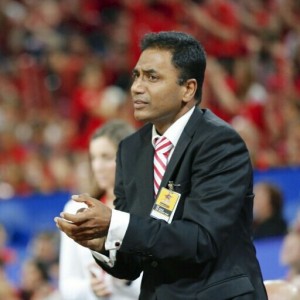 “Your Christian faith is a journey,” says Marvin, “and later on in my life in my late teens and early twenties I pursued a career as a music journalist, and during that time it would be fair to say that my faith suffered a lot because of the environment that I was in.

“As with most things you don’t lose your faith overnight as much as you don’t gain weight overnight – it happens over a period of time. I think there was a weekend where I actually didn’t go to church – and I was raised to always go to church on Sundays – and I remember not going to church on a Sunday morning and waking up on the Monday and realising that I’d got to point where it was that bad that I actually missed going to church. I think that was a wake up call for me.”

Around the same time, Marvin met the woman who would become his wife. She had faith in God, and helped him along his faith journey to recapture his faith.

Since then, says Marvin, “things have been very good.”

He and Leigh married, and now have six children. “One of the things we do as a family is make sure we pray together every day. So we go to church every morning and when we’re all together, we make sure we say our family prayers together.”

But as managing director of the Wildcats, Marvin is often away on business, making this daily prayer time difficult.

“I do travel a lot, and one of the things I do when I have to book a flight is I try to catch the flight that’s after 8am out of Perth so I can get to church with my kids.

“And when I’m on the road there’s not very many places where you can find a church to pray in, and that is difficult, but then you’ve just got to pray in silence and make sure you don’t miss your prayer times. Because especially when you’re disrupted and on the road and you miss your prayer time, then you miss your orientation, it’s almost like calibrating your clock to God’s time. If I don’t do that first thing in the morning then I find my day is chaotic and I lose the presence of God in my life.”

Marvin’s faith in God has transformed his life, from the personal to the professional, with many of the core values of the Wildcats being informed by Marvin’s personal faith.

Two of their core values are “servant leadership” and “no swearing.”

Servant leadership is right out of the gospel, right off the lips of Jesus. So it’s surprising that a secular sports organisation would have it as one of their core values.

But Marvin insists, “even though I’m the CEO and we have 55 full time staff, and another 100 part time staff, when our games end you will see me in steel capped shoes and a hi-vis vest, moving pallets with all my staff. You will see me at 6.30 in the morning moving carpets with everyone else.

“You practice servant leadership by example: you try to be the first one in at work, and the one who’s willing to do whatever you ask of someone else.”

“You practice servant leadership by example: you try to be the first one in at work, and the one who’s willing to do whatever you ask of someone else. When your staff see you practice what you preach and it’s authentic, then they will follow and it’s amazing how many have adopted that servant leadership. It’s often practised in our organisation by many who are not Christians, and some who are.

Another of the core values is “no swearing,” with Marvin admitting that it’s not exclusive to Christian faith, but rather an outcome of it.

“The Bible is very clear on how we should speak to each other, and we are very strong on having a family-friendly environment. And that is a very secular set of words to really say that we are talking about a life of faith.”

When he took over the reigns about seven years ago, Marvin says one of the first things he did was try to establish a mission and vision for the organisation, because they didn’t have one. They came up with: “inspire and entertain through excellence.”

“We realised the one thing we could do that no one else could do better than us, was to be positive role models in sport.

“We released anyone in the organisation from the office, or the team, or the coaches who didn’t want to share that value. We went out and sought people (players, coaches and staff) who wanted to share that core value.”

“It’s important [work], because at the end of every season, if you haven’t won the championship, and sometimes even if you do, there’s a great sense of emptiness in the organisation.”

From that day forward, whenever they signed a new player they informed them that being part of the Wildcats meant a commitment to 350 hours of community service each calendar year, instead of the usual 150. With each player committing to that much community service, the team manages to do around 300 community visits each year. Add to that the visits done by the newly acquired women’s basketball tea
m, the Perth Lynx, and the whole organisation will have done 600 community visits to schools and hospitals.

“We are quite excited about what that will mean, not now, but in 5 years time,” says Marvin.

“It’s important [work], because at the end of every season, if you haven’t won the championship, and sometimes even if you do, there’s a great sense of emptiness in the organisation. But if you give back to the community, for whatever reason – faith or otherwise – when the season is over and you may not have won the championship, you still have a great sense of satisfaction that you’ve given back.

“And that’s something to be proud of, which is going to appease any disappointment of not winning.”