In the late 90s I had a crisis of faith when I read a book called Why Christianity must Change or Die by Bishop John Shelby Spong. One of the things he said was that no scholar believed that the four gospels presented the historical Jesus. This threw my burgeoning faith into turmoil. 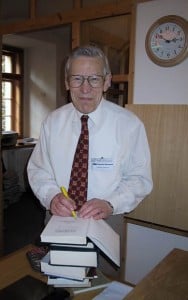 In the now defunct Moree Christian Bookshop, in northern NSW, I found a little book in their bargain bin called I Believe in the Historical Jesus for $1. I bought it, read it and my faith was encouraged and strengthened by it. So I wrote to the author (who I’d never heard of) who happened to be the great I.H Marshall.

Marshall, who passed away earlier this month, was a Scotsman and pioneer evangelical scholar. In a time when there were almost no evangelical biblical scholars in secular universities anywhere in the world, Marshall was a leader in defending the historicity of the gospel accounts of Jesus.

I told him about my doubts and he wrote back.

I told him about my doubts and he wrote back and sent me a copy of Tom Wright’s book, Who is Jesus? He told me he was praying for me and asked me to write him back.

Over the next two years we wrote back and forth and Marshall guided me through books by Tom Wright, Paul Barnett, Craig Blomberg, Darrell Bock, Graham Twelftree and more critical scholars like John Meier, E.P Sanders, John Dominic Crossan, Albert Schweitzer and Rudolf Bultmann. His set readings stretched, strengthened and sometimes challenged my faith. But his guiding words helped me see through the fog of critical scholarship and see the true historical value of the gospels and that the Jesus of the Bible is the historical Jesus.

He always let me know he was praying for me, and yet he never encouraged blind faith but a robust and strong faith in the historicity of the gospels.

He always let me know he was praying for me, and yet he never encouraged blind faith but a robust and strong faith in the historicity of the gospels.

He letters showed that he loved the scholars that he talked about no matter if they agreed with him or not. I remember one time in one of my letters to Marshall calling a certain scholar an idiot because he didn’t believe in something I thought was true. Marshall gently but firmly rebuked me, saying that we need to love our enemies, especially our theological ones, and that me calling him an idiot was not seeing that God had created this man with a intellectual gift but that he had been plagued by unbelief. I learned therefore, that we shouldn’t mock our theological sparring partner but pray for him.

I thank God for I.H Marshall writing back to a teenage university dropout who worked at the local swimming pool in a small rural town in Australia. If it weren’t for I.H Marshall, I probably wouldn’t be a Christian!

Prolific authors, a futurologist and a journo honoured for pathbreaking works