Wang is a young seaman from China, working on one of the many container ships that enter the port of Melbourne. 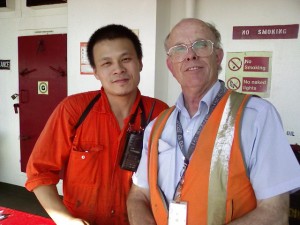 Like many seafarers, he had time at sea to ponder life and its meaning. However, he found his work and atheistic background in China did not give answers.

Ian and Vivian Dennis, Melbourne-based missionaries with Mission to Seafarers and European Christian Mission, met Wang on a visit to his ship. He expressed his desire to read gospel literature in his language while at sea.

Wang’s ship returned a month later to Melbourne. Ian and Vivian then encouraged him to attempt a Chinese Bible study course on salvation. On his next visit to Melbourne he returned the course and shared with them that he had committed his life to Christ.

His British senior officer on the ship was astounded at the change in Wang’s life, which also led that officer to commence study on the claims of Jesus.

“We were thankful we could give further Bible study materials to Wang to help him grow spiritually, but the difficulty remains of where we could refer Wang for  follow up in China,” Ian says. “However as God guided Wang to us in this port we believe He can also bring Wang in contact with a church near to his home where he can further be discipled.”

Ian’s call to evangelise those at sea began in the 1970s as a young man. He worked in a building overlooking Circular Quay, which at the time was filled with fishing trawlers. God challenged him to take the gospel to deep sea fishermen from Japan and Taiwan who worked in the harbour.

“At that time I was just learning about cross cultural evangelism and personal evangelism.  So in poor and faltering way I took the Scriptures and other gospel materials to these fishermen,” Ian explains. 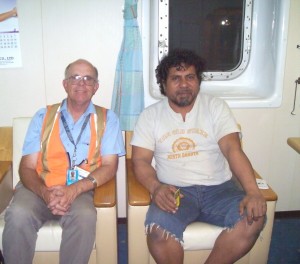 From that small beginning the ministry developed. Ian went to Bible College for three years, met his future wife Vivian, and since 1986 they have been a team with Vivian’s special expertise amongst Chinese seafarers harking from her Malaysian background.

Another shipmate who has come to Christ is Bariniko. He is a ship’s bosun, or what is known on the land as a foreman.  He comes from the Kiribati Islands in the Pacific and had a Catholic upbringing.

English is his second language, so he could read gospel materials that Ian and Vivian gave him on a visit to his ship.

“We engaged him in conversation about whether he could be sure of salvation, forgiveness of sins, and have a personal relationship with Christ,” Ian says. “All such talk was foreign to Bariniko, and we again gave him a study course on salvation to complete as he had time at sea to do this.

“On returning to Melbourne he presented his completed course to us, stating he had committed his life to Christ.”

“Why didn’t the priest teach us this?!“ Bariniko exclaimed. “We have been taught very little of the Bible – thank you for bring the light to this ship.”

Bariniko is one of many who showed a veneer of religion but no saving knowledge of Christ.

These stories highlight the importance of putting the word of God into the hands of seafarers. Ian and Vivian’s evangelistic  approach is simple. They ascend the gangway of a ship, talk to the security watchman in his native language, and then offer a tract from Psalm 107:23-32 to the seafarers in their language and express that it shows God’s love for them.

“From that starting point we can present a gospel message, and proceed to passages such as Mark 4:35-41, which acknowledge Jesus Christ who not only controls nature and their physical wellbeing, but save them eternally,” Ian says.

“Even Muslim seafarers are happy to receive this portion from the Psalms, indeed very carefully read it as they consider that God does really care for them as shown in the Bible.

“Very rarely do we find a seafarer who does not believe in God, for life on the sea is too extreme, and the issues of life and death are impressed upon them.

“Of course for this to happen the Christian seafarers needs a Bible in his own language.  We are very thankful to the Bible Society in Australia and other Bible Societies around the world for providing such Bibles.”

Seafarers are also provided with CDs and DVDs and other Bible study materials to build their faith while experiencing loneliness and no opportunity to attend church at sea.

“In some ports the devil can be the roaring lion through the temptations of alcohol, gambling and immorality, so a Christian seafarer must really have the armour of God in place, as we have seen some sad and serious situations arise from falling into sin,” Ian says.

Sailing through the Scriptures