Australia is heading for trouble with a capital T, which rhymes with P, which stands for plebiscite (with apologies to The Music Man). The national temperature is rising, and the angry words are increasing, even though we don’t have a date or a question or much certainty about anything of what the mooted plebiscite on same-sex marriage will involve.

There is one point about which Christians (some of whom, it should be acknowledged, are in favour of same-sex marriage – and for various reasons) should remind ourselves daily. That is the importance of tone, which must be reasonable, loving and gentle. Any false steps here will be remembered long into the future, and there are issues at stake that go beyond the plebiscite (important though that is), such as how Australia will function in the future as a pluralistic society.

There is another capital T about which Australians talk a great deal, and that is Tolerance. I’ve never admired tolerance as a virtue, as I wrote recently in a short column in The Age. It ranks well behind compassion or empathy, let alone encouraging or identifying with someone. 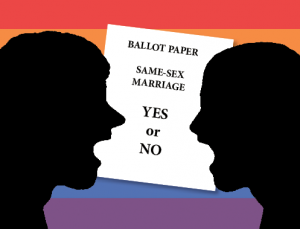 Australians pride ourselves on being a tolerant people, but what we are praising in ourselves is often far closer to apathy – we simply don’t care very much. When something actually impinges on our daily lives, we may find that vaunted tolerance is merely a thin veneer.

But however substandard tolerance may be as an attitude, it is very much superior to its opposite. I fear very much for the tenor of the debate in the coming plebiscite. People on both sides have already given and taken offence, and this will probably only escalate as discussion gets under way.

That said, it is no reason not to have the conversation. The idea of offence, increasingly built into some anti-discrimination codes, can disguise a good many unconsidered assumptions and is often used to close down discussion that interest groups might find inconvenient. Anti-discrimination laws are important, along with laws banning incitement, but offence is a very unsatisfactory rubric because it is so subjective.

Recently many people were offended by the Australian Christian Lobby seeking to repeal vilification laws for the duration of the debate. I thought the idea misguided because it implied that those opposed to same-sex marriage were wanting to vilify. However, the request is understandable when the Catholic Archbishop of Hobart faces discrimination action for advocating what is still the law of the land, marriage only between a man and a woman.

Opponents of same-sex marriage can and must make their arguments without contempt or vilification. (As, indeed, ACL managing director Lyle Shelton did, speaking calmly and without vilifying on the ABC’s Q & A current affairs show recently.) Christians who read their Bibles know they must do much more than tolerate LGBTI people in the community, many of whom also identify as Christians. They must love them as themselves, and wish only the best for them. At the very least, this demands respect and simple human decency.

“Christians who read their Bibles know they must do much more than tolerate LGBTI people in the community.”

But the same obligation extends to supporters of same-sex marriage, who are often quick to dismiss any arguments against it as pure homophobia. Sometimes this might be true, but often they flow from a real investment in what society should look like and from genuine concerns about the direction it is taking.

Same-sex marriage has become a sort of litmus test about wider social issues.

In January the world’s Anglican leaders met in England to try to avoid schism over sexuality, a possibility that has cast a pall over the worldwide Anglican Communion for two decades. The primates managed to avoid this yet again by voting to uphold the traditional understanding of marriage. This outraged many secularists, including The Times whose leader writer fulminated that the church had no right to maintain its traditional view.

As James Mumford wrote in The Spectator, this indicates a disturbing trend. It is one thing to tell the church it can’t impose its beliefs on the rest of society; quite another to say it shouldn’t hold those beliefs at all. The once-august and conservative newspaper apparently holds that Christians should not only not advocate beliefs against same-sex marriage, they should not be allowed to think them.

Mumford wrote: “It is easy to overlook how ominous this shift really is. The conviction that organisations and communities cannot determine their own distinct ethos, their own rules for membership and their own criteria for leadership imperils the very survival of a pluralistic society.

“Consider a different case. Imagine that a female student leader of a church group at a university is expected not to sleep with her boyfriend. Now, one may think chastity a ridiculously outdated ideal, even a damaging instance of repression.

One may think that group’s policy, and the way they justify it, is de facto judgmental about people who don’t live by their ideal. You may think it’s harsh that those leaders get removed from ministry if they break those rules. But for all our talk of diversity and pluralism, in reality this is what it looks like. Communities in society which look and feel very different from yours being allowed to look and feel very different from yours.”

Mumford asked readers to “indulge my alarmism a little further. Could the paradigm shift in view here – that communities shouldn’t be allowed to adhere to certain principles – not presage something even more ominous? We are not bereft of historical precedent when it comes to public opinion paving the way for state intervention.”

Actually, I think that is a little alarmist. Certainly in Australia we are a long way from closing down churches or banning the Bible because they condemn homosexual activity. Christians can hold these views without vilifying anyone. The Concise Oxford defines vilify as “defame, traduce, speak evil of”, modes of speech that are strongly counter to the biblical exhortations.

But if someone had suggested 10 years ago that Hobart Archbishop Julian Porteous would be brought before the anti-discrimination tribunal in Tasmania because he distributed a booklet advocating what is, in fact, the current legal position in this country and suggesting children should have both a mother and a father, that suggestion would have been ridiculed. Yet so it has come to pass, and that is a little alarming.

One thing I can guarantee: between now and the plebiscite there will be lots of suggestions, claims, statistics and analyses that will offend people. Christians should take the lead in the tenor of the debate, respecting their opponents (on both sides) as holding beliefs in good conscience, even good will. In short, applying simple human decency.

Barney Zwartz is a Senior Fellow of the Centre for Public Christianity. This is an extended version of a column that first appeared in The Age on February 29.

Can we master the art of apologising in an 'Age of Apologies'?

Can we master the art of apologising in an 'Age of Apologies'?

Sorry may not be the hardest word to say these days, but apologising is still…