The unusual life of Simone Weil

We tend to think of the 20th century as a great century of disbelief.

We imagine the widespread tapering off of religious faith, paradoxically because we live in a more comfortable age but also because we have lived in an age of great human suffering.

What is often overlooked is how many of the 20th century’s great intellectuals actually found faith, of a kind. Writers such as T.S. Eliot, J.R.R. Tolkien, W.H. Auden, Flannery O’Connor, Walker Percy, A.N. Wilson, Alexander Solzhenitsyn, René Girard, Les Murray and, of course, C.S. Lewis, make for a formidable list. For Christians who want to present the gospel of Christ as a compelling case in the 21st century, it is worth asking, “What made the gospel attractive to these people? Why did these unusually gifted and insightful thinkers feel that Christ made sense to them?” 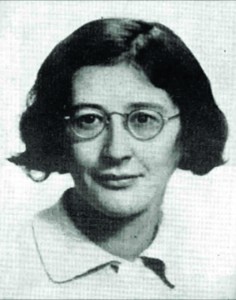 Among this group ought to be included the French philosopher Simone Weil, who died in 1943 at the young age of 34, but who even in her turbulent times was known as an intellectual leader and activist.

Weil was born into an agnostic family of Jewish extraction in Paris in 1909. Her family was a close one, but she was deeply affected by her father Bernard’s absence due to his service in World War I. Even as a five-year-old, she refused to eat sugar on the grounds that the soldiers at the front were unable to have it. This sacrificial and altruistic behaviour was a pattern she adopted throughout her life, and possibly contributed to her early death.

Weil was recognised to be a precocious talent, mastering Greek and Sanskrit in her early years. In 1928 she was admitted to the École Normale Supérieure, and there studied philosophy. From there she became a schoolteacher at a girls’ school in Le Puy.

During this period, she was attracted to Marxist thinking and began advocating for trade unions and joining in strikes. In 1934, she took a year off from her teaching and worked as a factory worker undercover. Though she was a pacificist, in 1936 she fought with the Republicans in the Spanish Civil War. Being completely inept as a fighter, her fellow soldiers kept her away from weapons for the most part until she eventually burnt herself with cooking oil and was sent home.

Weil made her name as a writer of provocative political essays. She was notably eccentric in appearance, playing the role of absorbed intellectual unselfconsciously. Not conventionally beautiful, she would wear loose, masculine clothes, and certainly no make-up. Her mentor, the priest Father Perrin, described her wearing a large brown beret, a cape, and floppy shoes. She determined early in her life that she would not pursue love affairs and, indeed, mostly avoided physical contact with anyone.

But, much to the surprise of the left-leaning intelligentsia that admired her, Simone Weil had a conversion experience in the late 1930s. As you can imagine, there was nothing orthodox or conventional about this occurrence. She describes it in a letter she called her “Spiritual Autobiography”.

Already she had sensed, in working in the Renault factory, that Christianity was the irresistible faith of the common person, the slave of others. But even then, Weil would never say that she actually went seeking for God. Rather, she was in a sense waiting for him to contact her. And he did, in three momentous events.

After her year in the factories, Weil journeyed to Portugal, and tells of visiting a tiny impoverished village, alone. She heard there the hymn-singing of the wives of the fishermen. She wrote: “There, the conviction was suddenly borne in me that Christianity is pre-eminently the religion of slaves, that slaves cannot help belonging to it, and I among others.”

Recuperating from her burns in Portugal in 1938, and overwhelmed by a headache, she heard a choir singing a Gregorian chant on Palm Sunday. This experience brought home to her the simultaneous reality of the pain and the ecstasy of the cross of Christ: “The thought of the Passion of Christ entered into my being once and for all.”

She also at this time was introduced to an extraordinary poem by an English poet and pastor called “Love”. It begins:
Love bade me welcome. Yet my soul drew back
Guilty of dust and sin.
But quick-eyed Love, observing me grow slack
From my first entrance in,
Drew nearer to me, sweetly questioning,
If I lacked any thing.

She learnt it by heart, and would often recite it. During one of these recitations, “Christ himself came down and took possession of me.”

What did this conversion experience mean for Simone Weil?

Like many believers of a more mystical type, Weil had a heightened sense of her unworthiness. At the same time, this very tender conscience enabled her to understand the extraordinary power of the grace of God. As she wrote: “Perhaps God likes to use castaway objects, waste, rejects … It sometimes seems to me that when I am treated in so merciful a way, every sin on my part must be a mortal sin. And I am constantly committing them.”

In her letters, she reveals that she could not bring herself officially to join the Catholic Church by accepting baptism. Her rationale was that limiting the incarnation of Christ to the institutional form of a church made it much harder to “show the public the possibility of a truly incarnated Christianity.”

In her scholarly writings, Weil continually traced the ideas of Christianity back to surprising sources, most especially in the thought of the Greeks. Her view was that God’s revelation of Christ came from multiple directions, and not just via the church or through Scripture. For example, she points out that the ancient Greek tragedies talk of generational curses transmitted down the line until a perfectly guiltless person ends the curse by suffering the full impact of it.

Again in keeping with her mystical bent, Weil was fascinated by what she called “affliction” – an experience that is more than simple suffering, and which she saw as paradoxically a divine gift.

Affliction a gift? Yes, because that kind of experience drives a person to spiritual realisation. In her teasing and provocative style, Weil would write: “Evil is the form which God’s mercy takes in this world.” That’s true if we understand the affliction that results from evil as opening our eyes to our own true condition and driving us to the arms of God. Like a sharp stone, affliction cuts us open so that the grace of God can get in.

And then, for Weil, there was beauty. She wrote once that “the beauty of this world is Christ’s tender smile coming to us through matter.” We are captivated by the beautiful for the same reason that we are torn by affliction: so that our souls can receive the love of God in Christ.

Weil did not live many days beyond her strange conversion to Christianity. Though she and her family left France in 1942 for the United States, she felt the need to join the French Resistance.

Travelling to London, she did join, and it is possible that she was also recruited as a spy. While working in a desk job in London, she wrote a major book about what a post-Nazi Christian France might look like, called The Need for Roots.

However, in 1943 she picked up a case of tuberculosis. Weil, being herself, refused treatment and, as she had done when she was a young girl, chose to identify with the privations of those she was serving by restricting her diet to the same rations as those in German-occupied France. It was not long before she died from cardiac failure.

Is Weil admirable? Is she an example of a Christ-like life? In many ways, her behaviour was extreme and even reckless. Her thought veers in many directions, many of them out of the bounds of biblical orthodoxy.

But Simone Weil is our servant in showing that Jesus Christ can indeed be captivating for our intelligent contemporaries. In her originality and intensity she shows how Christ upsets our conception of the normal and the commonplace. She does not let us rest smugly satisfied with a tame faith. As T.S. Eliot once said: “We must simply expose ourselves to the personality of a woman of genius, of a kind of genius akin to that of the saints.” Yes, that’s it: Weil does not fit into any kind of tidy drawer. She’s peculiar and angular. And perhaps that angularity is precisely her gift to us, in that she opens us up to the work of the Spirit of God in the world.