When 400km “is just the training ride”

On Sunday, when Graeme Rapp finished the 4-day Narrabri 400 bike ride, his mind was already on another, much longer one. While many would find four hundred kilometres punishing enough, for avid biker Rapp it was “just training.”

He’s gearing up mentally and physically for the “big one”– the nine week, 7,200km Bike for Bibles’ Big Ride from Broome to Sydney. On June 30th,  sixty-five riders and crew will take off from Broome in WA. They’ll spend nine weeks on the road, cutting across four states before finishing in Sydney on September 1st.  Each one on the team will be raising money for a Bible Society literacy/domestic violence project in five Latin American countries, as well as for Australian projects. 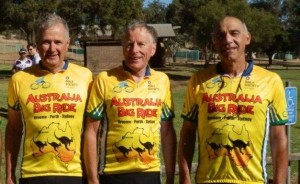 Jim Blaxland (centre) and others on this year’s Narrabri 400, spreading the news about the Big Ride

Rapp started riding with BFB in 2006, having been introduced to the cause by the previous minister at his church, the Narrabri Anglican.  Many in the church – including minsters Tim Baxter, Paul Foster and Richard Riley – faithfully support Bike For Bibles (BFB) and its fundraising for Bible Society projects.

“The congregations of our church and the local Uniting Church have a great relationship with BFB,” Rapp says. “It’s our passion to support the work of distributing Bibles.” And, clearly, they really like cycling, too.  They’re so devoted to the sport and to helping the Bible Society raise funds, that in 2011 they decided to start their own “local” BFB ride – the Narrabri 400.

“Through these annual rides we fundraise for the Bible Society,  get young people and families interested in BFB, and also reach out to non-Christians in our community,” says Rapp. He says that BFB has developed a good reputation in Narrabri. “A number of people in the community have taken up cycling because of it, and the awareness helps too when we are fundraising!”

For Rapp, Broome to Sydney will be his second “big” ride, having done the Townsville-Darwin-Broome ride in 2010. Training for the Big Ride is already part of  his daily routine. “I’m getting plenty of mileage, cycling to and from work every day and then riding up to 170km on weekends. I’m putting in the training because I’d like to do it easier this time!” 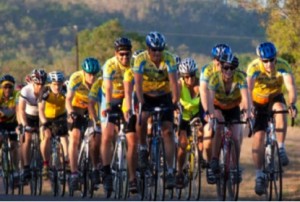 Bike For Bibles riders and crew are passionate about cycling and about sending Bibles around the world.

Five other riders who were on the Narrabri 400 will be with Rapp in the Big Ride. This included Ride Organiser Jim Blaxland, the man who puts BFB rides together across the country, challenging people to “stretch themselves.” Blaxland reports that cyclists on the Big Ride were doing 200 to 400km a week as training, and were getting their bikes in top shape. “They’re also doing all they can on the fundraising front; one girl organised a bush dance at her church, one guy had a dessert night, another held a trivia night. I thank God for our donors, and encourage them to please give generously to support our team as they gear up for June 30th!”

Graeme Rapp is also working hard on his fundraising. “I’ve sent out brochures to family and friends, and to churches around Narrabri. My own church is very good to us too, when it comes to donating.”

He sends this appeal out on behalf of all riders on the Big Ride. “Please be part of our effort, and help get the word of God to people both here and overseas. There are so many who need our help.

“In Australia we often donate for cancer work and other areas of health, but the greatest disease we have is sin. It affects 100 per cent of people 100 per cent of the time. The only healing is Jesus, and therefore the Bible is absolutely essential.”

Click here to read about the projects BFB is fundraising for, or to donate to them.

Click here to support the riders’ fundraising on the Big Ride. No dollar goes towards the riders themselves.