Working for peace in Nigeria

Dawn and Fraser Jackson live and work in Nigeria. Fraser is a Librarian at the Theological College of Northern Nigeria, while Dawn is involved in reconciliation between Muslims and Christians through an organisation called BRICC. Dawn was in a prayer meeting last week when two bombs went off in the market square in Jos, killing 118 people. Below, she shares what it’s like living in Nigera, how she feels about the violence being done by Boko Haram, and how Australians can pray for the north African country.

How long have you lived in Nigeria?

We moved to Nigeria in 2012 and live at the Theological College of Northern Nigeria (TCNN) in Bukuru where Fraser is Librarian. I spend a lot of my time in Jos itself and our children James (15) and Ruth (13) go to school there. 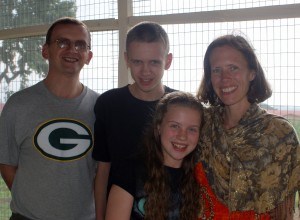 Why did you move to Nigeria?

Fraser and I met whilst on Wycliffe Bible Translators short term graduate programme in 1993. In 2010, we went to the Keswick Christian Convention knowing that God was about to tell us something important about our future. During the missions meeting in Keswick, God told us he wanted us to go to Africa. We didn’t know where, with whom or doing what.

After a false start with another Mission organisation, we saw an advert for Mission Africa (formerly Qua Ibo). The chief executive had just received a request from the Theological College of Northern Nigeria for an academic librarian (a role suited to Fraser), there was a need for editors at ACTS publishing (which attracted me), and there was an American Christian school in Jos ideal for James and Ruth. God had put all the pieces into place and it couldn’t have been clearer.

He also showed his sense of humour. At the call to go to Africa we said, “Yes, of course, but we’d rather not go to Nigeria, east Africa would be nice.” Many things have shown us Nigeria is the right place and we’re happy here.

What did you expect in terms of the security situation when you moved there, and how has it been over that time?

At first it was a bit odd to see so many checkpoints and people with guns but I’m friendly to them and they usually respond positively. We’re used to it now.  Until the bomb on last week we had experienced no trouble.

Many of our family and friends said we were mad to go to Nigeria but the safest place in the world is wherever God wants you to be.  I had a similar reaction when someone told me of friends going to serve in Afghanistan, but if God calls you to a place that’s where to go, he knows what he’s doing.

Tell us what happened recently with the bombings in Jos.

I was at a prayer meeting at a compound in Jos when the bomb went off. I felt the shockwaves and heard it extremely clearly.

We didn’t know what it was at first but another missionary who’d been in Jos longer said it sounded louder than the bomb that destroyed the COCIN church headquarters in the city in 2012.

My first thoughts were for my children at Hillcrest Christian school because until the smoke rose clearly, we didn’t know where the bomb had been.

I collected them and headed home to Bukuru about 12 miles away, thankfully in the opposite direction. If there is trouble/tension in the city it’s best to keep out of the way at home.

What is the general perception of the government’s response to the violence, from the perspective of your friends?

My Nigerian friends are not impressed with the government or military.  Their theories run from infiltration by Boko Haram sympathisers, to the military making a lot up to get more money.  Politicians are seen as corrupt and out for what they can get without caring for the ordinary Nigerian.  I can’t comment on how accurate their theories are.

Violence is disturbing whatever country it occurs in.  Some of my friends, Christian and Muslim, know people who were killed or injured in last Tuesday’s bomb. Others know people who suffered in retaliation. That’s one of the reasons the explosion was planned for Jos, the hope that it would spark off retaliatory attacks. We thank God that apart from a couple of relatively small incidents, so far this has not happened.

What do locals think about the violence from groups like Boko Haram? 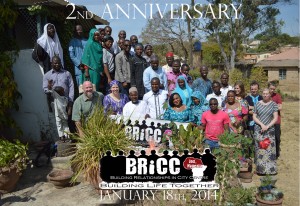 Most people, Christian and Muslim, want to live in peace. I am involved in an organisation called BRICC (Building Relationships In City Centre) which aims to bring peace, hope and greater chances for the future by building relationships through education, women’s skills training, sports and the arts. We work at grassroots level. Anyone in the community can present an idea for a programme which is then put to the leaders of BRICC.  If it is approved we do all we can to make it happen.

All programmes are 50% Muslim, 50% Christian participants, all start with peace education and trauma healing workshops.

We have so many testimonies from Christians and Muslims that before they came to BRICC they hated the other community but after starting one of our programmes they see that what unites them is far greater than the divisions. Even those who suffered terribly in the various Jos crises make friends and find support in people from the other religion.

We laugh together at new births and friendships; we grieve together at bereavements in our BRICC family and support each other. Christians and Muslims visit eachothers’ houses in a way they never would have done before. This is what will bring hope and a future to segregated areas where tensions are high. BRICC allows no proselytising of either religion on its premises but we try to bring light into very dark places.

Do you feel like anything can be done to stop the spread of influence and impact of Islamic militants in Nigeria?

Love, education and opportunities in life are the best things to stop Islamic militants.  Many of the troublemakers are not devoutly religious; they see the money/influence offered and feel there’s no real alternative. The problem is as much economic as anything.

There are many young men with little education and few chances to earn an honest living so joining a gang like Boko Haram seems attractive. Sadly they often do not see Christianity as an attractive option.

There is a lot of prosperity gospel in Nigeria and a lot of legalism/judgementalism. I’m also involved in an initiative called InReach, totally separate from BRICC, which is a 6 week “conversation” in small groups of Christians which tries to get them to think for themselves, beyond traditionalism and judgementalism, to how Jesus wants them to live out his love to those around them.  It’s a simple and not original message (except in the Bible) and we’ve only been doing it for under a year but the response has been extremely encouraging.  So many people, pastors included, have said they’ve never thought of what we’re suggesting and they are changing their attitudes and behaviour.  We stress the importance of listening to Jesus, studying the way he did things and being prepared to do things differently if that’s what he’s asking.

How can people in Australia pray for Nigeria?