A poem a day keeps depression at bay

When Chantale Roxanas decided to write a poem each day for 365 days, she had no idea she was embarking on a journey that would leave her so deeply changed.

Chantale is a video producer and editor by day. She’s also married and, as her bio reads, a mum to “two hilarious and strong-willed kids in the ’burbs of Sydney, Australia.”

None of this necessarily lends itself to writing a poem every day. 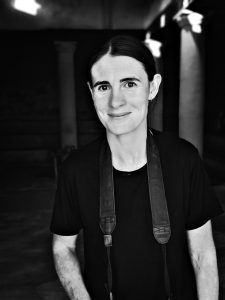 However, when her pastor challenged the church’s creatives to commit to developing their creativity for the next 100 days, Chantale got into it, experimenting with different mediums including photography and drawing before focusing on poetry about halfway through. When the 100-day goal was completed, Chantale decided to push herself further and dive right into a 365-day poetry challenge.

Yet, as Chantale soon discovered, writing 365 days of poetry was no easy task.

“It ran the whole gamut from being really cathartic to being the most frustrating, difficult thing I’ve ever committed to,” she says.

“It ran the whole gamut from being really cathartic to being the most frustrating, difficult thing I’ve ever committed to.”

Chantale found that she didn’t have much time for TV that year because “something had to give.”

“Some nights it would take me a couple of hours to get something I was happy with. And I had really strict rules for the challenge – a poem had to be written and posted on social media within the calendar day, so I couldn’t ‘stockpile’ poems for days I was sick, or didn’t feel like writing, which probably made it much harder than it had to be.”

Instead, most days Chantale’s lines were crafted late at night, while she perched on a tiny stool that she would drag into her bathroom or kitchen.

She developed an “ideal process” of gathering poetic fragments and lines to play with during the morning, which were inspired by podcasts she was listening to or books she was reading. However, Chantale admits, when she sat down with her fragments at night, there were many, many times when she struggled to find an idea to write about and had to simply “go sit in silence until I found a hook to play with and go from there.”

On day 270, Chantale almost gave up, posting an honest rant on Facebook and confessing “There’s no poetry. This may very likely be the end of the poetry challenge.”

“There’s no poetry. This may very likely be the end of the poetry challenge.”

“That one particular night I was sick and exhausted. Both my kids had been sick and we hadn’t had any good sleep in my house for a couple of weeks. My husband was away and I was at the end of my rope, and the thought of writing a poem was too much, so I wrote a Facebook post essentially saying ‘I quit’,” Chantale recalls.

Her friends responded quickly with encouragement, suggestions and assurances that they weren’t going to let her quit. A few hours later Chantale emerged with a poem conveying the difficulty of parenthood, which posted with the explanation “because I’m obstinate, and couldn’t break my streak. Not the best poem in the world, but it’s something. Now I’m going to bed!” 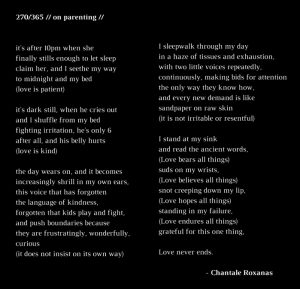 Chantal originally published her poems on Facebook with the hashtag #365daysofpoetry as a means of holding herself accountable to keeping her pledge, but she quickly became aware that her poems were influencing others in ways she had not expected.

“I think the more raw the poem was, the more people responded. I had a few poems that made me nauseous to post because of how vulnerable they were, but they were generally the ones that people responded best to.”

“I had a few poems that made me nauseous to post because of how vulnerable they were, but they were generally the ones that people responded best to.”

In fact, there was such an interest in the poems that, from Day 288, Chantale also began to publish them on her blogsite Poetic Rambler: Musings from the trenches on faith, life and depression, so that her friends without Facebook could read along.  This also had its challenges:

“I actually had to be really careful not to get discouraged if a poem didn’t get much of a response… I had to remind myself that I was writing for me, and the right people would see them and hopefully be encouraged.”

A year on, Chantale reflects that the challenge has shown her she can actually stick to things when she puts her mind to it. More importantly, it has given her a healthier perspective on work/life balance.

“I can’t do everything, but being creative is really important to my mental health, so I need to make space for it as an act of self-care. This meant making some hard decisions about how I’d spend my time, and it’s still something I’m working on, because I am a master procrastinator!”

“The act of showing up to write every day gave me a vehicle to wrestle with the darkness in a way that helped me sit with it, deal with it, even find gold in it.”

As someone who lives with depression, anxiety and PTSD, Chantale found her daily writing practice a helpful way of processing some really difficult things.

“The act of showing up to write every day gave me a vehicle to wrestle with the darkness in a way that helped me sit with it, deal with it, even find gold in it. It was an unexpected benefit that I’m profoundly grateful for,” she said.

There were a lot of poems that Chantale didn’t post on to social media because they were too personal, but that she instead showed her therapist. She also found that writing helped her to become more observant, because the days when she wasn’t paying attention were days when she struggled most to write. As a result, Chantale says she now actively tries to be more open to what’s going on around her.

Now at the end of the journey, Chantale has a collection of poems that not only document her year, but also chronicle her faith journey with a psalm-like quality.

Erin Martine Sessions, Adjunct Lecturer in the Psalms at Baptist Morling College, is a friend of Chantale’s and has watched the journey with interest.

“The best thing a person can do to develop their writing is to keep writing. Chantale had the self-discipline to complete a piece of writing every day and the fortitude to share it publicly,” she says.

“When a poet practises their craft, rarely do they show the world each day’s progress. What Chantale has shown us is not only a window into the mind and process of a writer, and a lyric-poetic project which is confessional, honest and authentic, but she has also written a collection that, like the Psalms, runs the gamut of human experience. There is joy and sorrow; thanksgiving and lament. These are poems of everyday life, and they are thoughtful and genuine and always in conversation with God.”

Chantale says she will probably keep writing each day. She’s had some of her friends request for her pull her year’s worth of poems into a book and she’s considering doing just that because “there’s something about holding poetry in your hands that makes it come alive in a way pixels can’t.” 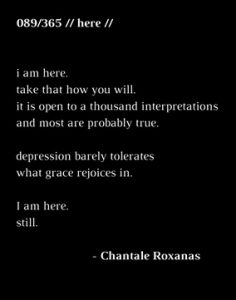 And performs some of his latest work

Dr Greg Clarke pays tribute to one of his favourite poets.

Micah Bournes doesn’t do Christian poetry – poetry doesn’t have a soul, he quips. But…

One of Australia’s most celebrated poets, Les Murray, has died aged 80. Murray was a…

He won Survivor by deceiving and manipulating along with the rest of his tribe, but Jericho said leaving his faith on the boat was harder than he thought.

Dr. Li Wenliang who provided an early warning about the Covid 19 coronavirus was a…