A new church is using mindfulness to reach the city

I’m sitting on a chair with my back straight, eyes closed, feet grounded firmly on the floor. I’m mentally tracing an invisible line from my toes, up my body to the top of my head. In the room with me, around 10 other people are doing the same.

A bus screeches past on the city street outside. The facilitator reminds us to focus on the breath, then shares some verses from Psalm 62: “For God alone, O my soul, wait in silence.” A door slams. “My mighty rock, my refuge.” A loud siren sounds, but the noise just laps at the edge of our consciousness.

Welcome to Stillness in the City – mindfulness sessions being run in the heart of the CBD by Scots Church Sydney. The 20-minute sessions are an innovative trial taking place every Wednesday at 5.30pm for eight weeks up until December 5. This is one of the first programs developed by the church in an attempt to reach out to city workers and residents.

“We’re thinking about how busy and stressed pretty well everyone is in city life – church members and non-church members. Offering them some skills in stress reduction, using the core qualities of mindfulness … is an offering of empathy for the stress that we all live with,” facilitator Jenny Brown – a clinical social worker and a founding member of the new Scots church plant – explains to Eternity.

“There’s not just a physical tiredness but there’s a restlessness about them in their souls.” – Craig Tucker

Scots was revitalised just over a year ago, when a new congregation was planted in the existing church building near Wynyard train station. The previous congregation had slowly declined, eventually leaving the building vacant for several years.

Church planting expert Craig Tucker was recruited as Scots “team leader” – a Presbyterian minister with 25 years’ experience planting churches in the Sydney suburbs of Blacktown and Drummoyne, who also serves as a mentor for the Geneva church planting network.

Since starting the Scots plant, Tucker has noticed the sense of isolation and loneliness experienced by many who live and work in the city. 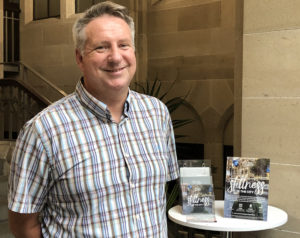 “The thing that’s really struck me in the last 12 months is that the closer you move to the centre of the city, the more workers are working longer hours. There’s not just a physical tiredness but there’s a restlessness about them in their souls. They don’t get time to stop and think and reflect enough.”

Tucker is keen to employ new strategies to care for city dwellers, and believes mindfulness to be a particularly relevant tool. Interest in the sessions is slowing growing (despite minimal advertising), with 10 to 12 attendees on average, and the church will “more than likely” run the program again next year.

He adds: “We’re not aware of any other Christian groups who are doing what we’re doing.”

“There are no candles, no bells. We’re just using the bodies that God has given us and his Word.” – Jenny Brown

The Stillness in the City sessions are deliberately different to secular or Buddhist mindfulness. In addition to stress reduction techniques, Brown has incorporated meditation on Scripture – “key verses in the Psalms that carry the theme of stillness.”

“A lot of the ways for managing stress are things that are God-given that we’ve just forgotten to utilise – things like breathing techniques … So [in our sessions] there are no candles, no bells. We’re just using the bodies that God has given us and his Word,” Brown explains.

However, she notes that the sessions are designed primarily as an act of care and not as an outreach tool. So the Bible is not used in a “pushy way”, church brochures are not handed out and attendees are not directly evangelised. In fact, the sessions are not even held in the body of the church but in a room off to the side.

“It’s a way of serving people … I hope that people, no matter how stressed they are, will genuinely experience immediate benefit … and that there’ll be a few simple techniques that they will take away and utilise,” says Brown.

“… they will go away with more than relaxation techniques.” – Jenny Brown

While outreach is not the primary goal, the mindfulness sessions are a helpful way for church members to invite friends along and, hopefully, to build bridges with those who may be open to finding out more about the gospel. The timing of the sessions is strategic, with the church’s weekly communal dinner held directly afterwards, followed by “hub” small groups, where members discuss Bible passages and the sermon from the previous Sunday.

“I hope that any visitors will walk away curious about a church that is thinking about the whole of the human, not just teaching from the Bible … that is [showing] that mental health and emotional wellbeing matters to the church and we care about people in all of those different ways,” says Brown.

“I trust that they will go away with more than relaxation techniques, but with something that taps into the sense of transcendence and the search for something beyond ourselves.” 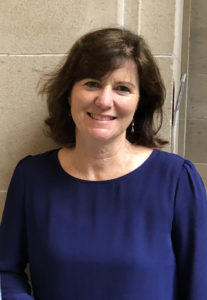 Jenny Brown, facilitator of Stillness in the City

While it may sound like a tough ask to experience relaxation and transcendence amidst the noise of Scots’ CBD location, according to Brown this actually increases the effectiveness of the sessions.

“The noise around is an essential part of the practice of mindfulness,” she asserts.

“We’re not calling it being quiet in the city. We’re calling it being still in the city. Mindfulness is not shutting out the noises around us. It’s acknowledging them, noticing them and learning to refocus one’s awareness back into the moment and back into self, and breathing and reflecting on encouraging thoughts, rather than being overwhelmed by the noise around.”

As I leave the session, I head to the nearby train station. The next train is only a minute away. My usual instinct would be to make a run for it. But I shrug away the thought and instead slowly ease my way through the crowds towards the train platform. I feel content to wait for the next one.

All of a sudden, I feel tired – so tired that my bag feels like lead and I can’t stop yawning. This is precisely the reaction reported by other Stillness in the City participants. It’s not until you stop, until you are still, that you discover the impact of the pace of modern city life – physically, mentally and spiritually. I’m already convinced about my need for more stillness.