You might be of the widely held view that there are two sorts of schools in the religious discrimination debate. But there are actually four – that’s according to clever analysis that has been broadly shared in the slow-moving split in the United Methodist Church, the second-largest Protestant church in the US.

On one side, we have the term “progressive” – for those whose stance is to affirm LGBTIQ – and on the other, the term “conservative” for those who take a traditional biblical or orthodox view of sexuality.

The key insight is that each of these groups can be divided into “compatibilist and incompatibilist” sectors.

Here’s how UMC pastor Tom Berlin – a progressive – lays out the four groups in a video that’s been circulated widely in that church: 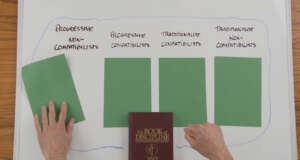 His analysis gives us these four groups:

These categories were originally devised by Tom Lambrecht, a leader of the conservative group in the UMC that publishes Good News magazine and a leader in the Weslayan covenant association that plans a conservative incompatibilist Global Methodist Church. A leftist Liberationist Methodist church will also form.

Let’s apply these to our schools.

John Dickson, the Anglican podcaster, has given us an affectionate description of the first two types of school. “I … strongly support the right of Christian schools to approach things differently, to employ only teachers who share their Christian convictions – even in the Maths classroom,” Dickson writes. “Key to the vision of such schools is a desire to demonstrate how all the disciplines of knowledge come from, and point to, the Creator. This is actually a venerable approach to learning – all true knowledge of the world is knowledge of the wisdom of God. Learning is thus an act of worship. In this case, it will matter to such a school that the Maths teacher keenly shares the school’s Christian convictions. And, in my view, our society is showing its deep bigotry in wanting to prevent such schools from pursuing this venerable vision.”

These schools include members of the Christian Schools Australia and the Australian Association of Christian Schools. These associations are speaking up loudly in the duel between the federal Religious Discrimination Bill, which will protect them, and the Victorian Equal Opportunity (Religious Exceptions) Amendment Bill 2021, which will severely narrow the exemptions that allow schools and other religious bodies to preference people who share their faith.

For these schools, the current debate is existential. Should the Victorian Law prevail, and they are forced to hire staff from the general population, it will radically dilute their vision of Christian community.

John Dickson writes: “Personally, I prefer the model of a Christian school that (a) employs a lot of Christian teachers across the disciplines and (b) has a strong chaplaincy program but which also (c) happily employs teachers who do not share Christian convictions. I think it is healthy for such Christian schools to employ (some) teachers who are atheists, Buddhists, members of the LGBTI community, and so on. This will allow students to see how (brilliantly) Christianity stacks up in the contest of ideas.”

Schools in this group are sponsored by churches that insist on seriously orthodox Christian principals and key executives. Yet they hire LGBTIQ staff too. Students at these schools experience a wide range of people on the staff as well as among themselves.

This includes schools that might be connected to a progressive group of churches such as some Anglican dioceses. They have an affirming stance towards the LGBTIQ community but may have an evangelical chaplain, for example, and a Crusader group meeting at lunchtime. Conservative Christians are welcome on staff and some evangelical families will be happy with the school while being aware that orthodox Christianity is not officially supported by the school.

State school systems such as NSW and Queensland that allow for voluntary Bible teaching in classtime also fit this group. Christianity is just another group in the school.

There are some newer independent schools that provide a secular alternative and some schools have lost a connection to a church network that sponsored them. State school systems such as Victoria, which have abolished voluntary Bible-teaching periods, also fit the category. School rituals such as “Wear it Purple Day” will be affirming, and Christianity will have no formal place in the school. There is likely to be a secularist ideology that says things are better that way.

Steff Lentz was sacked from Covenant Christian school after she came out as a lesbian. Lentz told The Sydney Morning Herald “I spent many months reading the best available scholarship on Christianity and sexuality because I wanted to keep doing a job that I loved. I tried to argue my case with my employer, to convince them that I could be a Christian and live true to biological realities that I cannot change. It was painful, often lonely, and ultimately unsuccessful.”

For the purist Christian-staff-only school, Lenz posted a double threat. First, she rejected the school’s code of conduct simply by being in a lesbian relationship, and then she proposed to promote a different form of Christianity in the evangelical school. It may be that the second would be unacceptable in some conservative compatibilist schools in which her gay identity would not be a hiring issue – but promoting another form of Christianity might be.

The current debate is whether the strictly conservative incompatibilist school can survive.

Cancelled doctor Jereth Kok, who is fighting his suspension by the Medical Board for online activity that included an Eternity article, challenges the progressive incompatibilist wing of this debate. The federal bill, if passed, will broaden freedom of speech provisions. While not every part of Kok’s Facebook comments is necessarily linked to a statement of belief (which would be protected) the Eternity article – part of a series discussing transgender – certainly can be seen that way. The link to schooling is this – what is the level of diversity of thought that educational institutions can cope with? It may be that a progressive incompatible institution is as narrow as some Christian schools are claimed to be.

The marriage madness in UK Methodism

The marriage madness in UK Methodism

An opinion piece. The annual Conference of the Methodist Church of Great Britain is meeting…

Halfway through the federal election campaign, there has been a gigantic switcheroo on the hot…

In this article, we present two opposing Christian perspectives on the Religious Discrimination Bill currently…