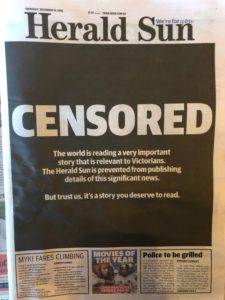 Newspapers around the country were prevented from reporting Pell’s conviction in December, after the VIC County Court issued a suppression order.

The verdict was delivered on December 11 in Melbourne’s county court, but Australian media was prevented from reporting the decision after the court imposed a suppression order.

Pell was charged with several child sex offences, with two separate sets of allegations. The decision in December, reported today, related to incidents involving choir boys at St Patrick’s Cathedral in Melbourne in the 1990s, when he was Archbishop of Melbourne.

The Victorian County Court said the second trial would not go ahead.

The second allegations involve two boys at a swimming pool in the 1970s in Ballarat, in Victoria, when Pell was working as a priest.

The suppression order prevented media from reporting the outcome of the first trial, or indeed that a trial was occurring at all, to avoid tainting a jury for the second. But today the Victorian County Court said the second trial would not go ahead. A sentence is yet to be handed down, but Chief Judge Peter Kidd said Pell would go to jail.

The decision comes a day after the Vatican’s historic four-day summit on the protection of minors in the church, where Pope Francis called priests who abuse children “tools of Satan”.

“Consecrated persons chosen by God to guide souls to salvation, let themselves be dominated by their human frailty or sickness and thus become tools of Satan,” said Francis.

Australia’s Catholic Archbishop of Brisbane Mark Coleridge gave the final homily [lecture] at the Vatican summit on Sunday, saying the Catholic church had been “our own worst enemy” in failing to confront the abuse of children.

“We will listen to them, believe them and walk with them.” – Mark Coleridge

Coleridge spoke of the Catholic Church being on a “dark mountain”.

“In listening to survivors, we have heard Christ crying out in the darkness,” he said.

“A mission stretches before us – a mission demanding not just words but real concrete action. We will do all we can to bring justice and healing to survivors of abuse; we will listen to them, believe them and walk with them; we will ensure that those who have abused are never again able to offend; we will call to account those who have concealed abuse.”

He went on to say that the church has for too long sought to “protect the Church’s reputation and even our own. We have shown too little mercy, and therefore we will receive the same, because the measure we give will be the measure we receive in return. We will not go unpunished, as David says, and we have already known punishment.”