Mark Latham, the atheist ex-ALPer turned One Nation leader, is running an open campaign to get Christian attention with twin pieces of legislation in the New South Wales (NSW) parliament. One of these* seeks to fill the odd gap in that state’s discrimination law by adding protection for religion – which would leave South Australia (SA) as the only state without laws against discrimination on the grounds of religion. A full-bodied inquiry is underway, so here’s an Eternity guide to the submissions from the community.

At the last day of hearings – Friday November 6 – Jihad Dibb (Labor, Lakemba) brought up two case studies: “Ali” who was unable to pray in prison, and “Zenab” who was vilified in a supermarket for wearing a head dress. Dibb was responding to Maria Narwaz of the Kingsford Legal Centre who, in common with several secular submissions, was suggesting NSW holds off until the Commonwealth sorts out its anti-discrimination legislation.

“The more we wait, ‘Ali’ and ‘Zenab’ remain open to a huge amount of discrimination” Dibb said.

The Diversity Council of Australia

The Diversity Council of Australia (DCA), is a heavyweight body sponsored by the Australian Chamber of Commerce and Industry, along with the Business Council of Australia. One thing that is striking in reading its submission into this inquiry about religious freedom, is how they describe their mission.

Notably absent is religion, making the submission worth reading as an example of how secular bodies approach religious discrimination laws.

[The submission by] the Diversity Council … shows that people of non Christian faith experience more discrimination at work than people of no faith or Christians, with an alarming 48 per cent reporting “any form  harassment or discrimination” in the last twelve months.

However, the DCA submission includes research that indicates real problems. It shows that people of non Christian faith experience more discrimination at work than people of no faith or Christians, with an alarming 48 per cent reporting “any form  harassment or discrimination” in the last twelve months.

The DCA submission also criticises the bill’s attempts to allow for religious free expression, in particular religious comment outside the workplace.

“This Bill would be damaging to attempts to create inclusive workplace cultures by not allowing policies that included reasonable employee conduct rules on religious expression outside of work hours. This would impair organisational efforts to create inclusive workplaces, and also give rise to complicated legal implications for workplaces,” it says. “The proposed legislation would give licence to a wide range of potentially harmful and offensive statements to be made by people ‘motivated by a religious belief’. Allowing such comments would not enhance social cohesion in NSW, or in workplaces.”

Examples of harmful speech included in the submission are:

“Studies show that messages equating homosexuality with sin are harmful to lesbian, gay and bisexual people, and can cause mental health consequences, great emotional distress, and feelings that were associated with anxiety, panic disorders, depression, and suicidality. Someone making such comments could claim that they are motivated by a religious belief, whether or not they were, as long as the comments could be shown to be in line with religious beliefs.”

“DCA is concerned that by permitting behaviour ‘motivated by a religious belief’ that would otherwise be unlawful, this legislation would allow non-inclusive language to be used in workplaces which would be damaging to inclusive cultures.” The submission makes it clear that DCA believes employee codes of conduct should include social media use outside the workplace. The DCA own religious inclusion guidelines emphasises separating religious belief from religious expression.

The Baptist Association of NSW and Sydney Anglicans

That’s not what the Baptist Association of NSW – and many of the “religious” submissions – want. “The practice of religion is far more than something that happens in a place of worship,” is a key emphasis in their submission. “Our faith represents the choices and actions we take in many areas of our lives including actions taken or not taken in community and the workplace.” This approach is taken up in other church submissions such as the Sydney Anglicans.

Reform is long overdue, the Sydney Anglican submission points out, referring to the NSW Law Reform Commission calling for religious anti discrimination provisions “more than 20 years ago.” Commonwealth reform in this are could well be delayed until after the next election, the Sydney Anglicans suggest.

“We have had a Head Prefect who is a Muslim,” Archbishop Glenn Davies responded to Jihad Dibb who had commented during the hearing he had no concerns about Anglican schools.

The Sydney Anglicans stressed that religion is a communal activity, and a religious discrimination provision needs to take account of that.

The Sydney Anglicans stressed that religion is a communal activity, and a religious discrimination provision needs to take account of that.

“Previous [law reform] proposals failed because they did not allow for the fact that religious belief is manifest in activities, often in association with others. This is recognised in ICCPR Article 18, which guarantees the right to manifest religious belief ‘in community with others and in public or private’ … One key way in which Christians and people of other faiths manifest their belief is by associating together to perform good works for the benefit of the society around them, through the formation of religious bodies such as welfare agencies, schools, hospitals and hospices.”

“I want to push back against the slogan heard in these hearings that ‘human rights are for human beings’,” Bishop Michael Stead, regarding the heading. “Making religion a personal attribute [in anti-discrimination law] is not sufficient because religion is something performed when people get together and do it in association with others.” 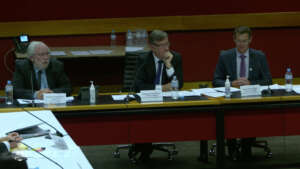 So how do you work out if a person is religious? Should a court decide?

The Freedom for Faith (FFF) legal think tank commends the Latham bill’s approach “that a person holds a religious belief if they genuinely hold the belief – i.e. if they testify that they hold that belief. This is an improvement on the Commonwealth Religious Discrimination Bill, which currently imposes a complex test based on what a hypothetical believer would reasonably consider is in accordance with the doctrines, tenets, beliefs, or teachings of the religion. That test is problematic because it puts a secular court into the position of determining whether a person genuinely holds a religious belief.”

The Freedom for Faith (FFF) legal think tank commends the Latham bill’s approach “that a person holds a religious belief if they genuinely hold the belief – i.e. if they testify that they hold that belief.

FFF says that laws about religious freedom will sometimes need help from the courts: “That a religious obligation may sometimes conflict with a civil law (private) obligation of some sort is a recognised feature of discrimination laws, and scope is given for the courts to determine how to balance these rights by considering whether imposition of the civil obligation is reasonable in all the circumstances.”

Professor Neil Foster, representing FFF, told the hearing that the bill does not override other laws – or even orders made under regulations, such as public health orders.

“This bill … prioritises religion above other human rights’ says the submission from Equality Australia which echoes its criticism of proposed federal legislation. Similarly, it suggests that only natural persons rather than religious organisations be protected and that “Religious activity” should be narrowed to mean “lawful religious activity” –  also a  point of contention in the Federal debate.

Equality Australia (EA) points to the bill’s explanatory note that says there would be no discrimination if a bank was to refuse employment to a teller who wore a full face covering. The bill attempts to set up standards of religious dress and wearing of symbols relating to community standards. EA points out that this would be the first anti-discrimination law in Australia to do so, and is biased against religious dress that contradicts existing standards.

Not passing this bill is EA’s preferred outcome – and they suggest a general review of the Anti Discrimination Act instead. In common with their submission to the federal inquiry, they treat religion as purely a personal affair – without regard to the existence of churches, synagogues or mosques. EA recognises the complexity of religious activity and the corresponding difficulty of religious freedom legislation, but simply use this complexity to argue that this bill is not supple enough.

Most of the “progressive” submissions make a case for balancing provisions that allow religious freedom rights to be considered alongside other rights. The Law Society suggests a Human Rights Act which would include religion. Another common concern from the ‘progressive’ side concerns whether ‘religious ethos organisations’ can discriminate in the provision of services.

“It is certainly time we halted not enhanced religious culture wars,” – Equal Voices

Equal Voices, which is made up of LGBTIQ people of faith and their supporters, argue the bill should not be passed, in favour of a wider consultation which should include possible Commonwealth legislation. Mindful of hurt experienced by their members they argue, “it is certainly time we halted not enhanced religious culture wars.” In common with other progressive organisations, they argue for a national charter of rights – which might or might not achieve that aim.

*The other Latham initiative would ban school teachers’ running lessons about gender fluidity in particular, and seeks parental consultation about a broader range of topics including Black Lives Matter. It may be voted on next year.

Three stories serve to underline the issue of religious freedom as the election approaches. And…